What The Russo Brothers did here is take high expectations and blow them out of the water with an emotionally thrilling finale. Get ready to be moved!

This is what one character says to another in the Marvel finale, "Avengers: Endgame", and it's fitting if my review space here were limited to only a few words.

All of these words fit the bill when describing Anthony and Joseph Russo's three-hour extravaganza that marks the 22nd, and final, film in this poignant phase of the Marvel Cinematic Universe. I laughed a lot, cried a decent amount, and was thoroughly thrilled by this film, which qualifies as one of the most emotionally-connective blockbusters ever produced.

It's fun, overwhelming and a true cinematic experience. One that you'll be dissecting on the way home, dreaming about at night and needing to see again to fully get the brunt of what the filmmakers are serving you. This is the juicy steak you take one small bite of at a time, in order to savor each moment. There are dozens of comic book Easter eggs stuffed into the film, including winks, nods, and straight-up smiles from the previous 21 movies.

What's it about? Let me try this without giving a shred of the goods away here because that would be as harmful as handing the infinity stones to a bald, purple Mad Titan. The film picks up shortly after Thanos snapped his fingers, taking out half of the Avengers and the world as we know it. The remaining heroes — Iron Man, Black Widow, Thor, Captain America among them — are scattered around the world, dealing with defeat in their own turmoil-fueled ways.

What Thanos did was a brutal gut punch to the senses for these heroes, one that could be everlasting, or is it? I don't need to spoil ten fan theories over what goes on, but nevertheless, the team makes a triumphant final effort to get the stones back, save their friends and restore order to the world. One last ride? For some of the cast members, indeed it is, and let me assure you, it's sweet action watching them do their thing.

After all, the heart and soul of the films center around great actors leaning into the material. In "Endgame", they do not disappoint. It starts with the irreplaceable Robert Downey Jr., who returns as the down-but-not-out Tony Stark/Iron Man. As the trailers have informed you, he's stuck in space sending lovely Facetime messages to his sweetheart (Gwyneth Paltrow), while trying to find a way back to Earth. If the movie belongs to any one actor, it's Downey Jr.

It all began with Downey Jr. A whimsical strong-arm by Jon Favreau over 11 years ago to headline this improbable movie called "Iron Man". If he hadn't convinced the studio to take a chance on the embattled actor, the films may have never happened. He's always been the anchor, and for good reason. Stark was a weapon-creating billionaire who couldn't care less until he was humbled by the sight of terrorists murdering soldiers in front of him with his own weapons and kidnapping him. Unlike most of the Avengers, he is a mere mortal who decided to do some good. That's why fans feel closest to him, and the actor brought you in. He made a self-obsessed rich playboy someone to root for, and get behind. Wow is the word.

For Chris Evans, Captain was a way out of B-movie purgatory. A chance to do something big, and live forever in cinema. From his first appearance in "First Avenger" to the final shot in "Endgame", he truly was the soul of the Marvel movies. An energetic yet undermanned American soldier willing to fight for good until the end. Most actors would have hammed it up and relied on the action. Evans dug into what made Steve Rogers tick. He gets a fitting sendoff here, and it's completely unconventional.

Chris Hemsworth, who also found career confirmation in the MCU, gets a fulfilling and rather hilarious story arc in "Endgame". Let's just say they pull a few recipes from Taika Waititi's "Thor Ragnarok", and spice it up a bit. You'll never guess what happens to the God of Thunder in this film, but it's unforgettable and something else. A display of how much confidence the filmmakers are working with.

Scarlett Johansson has only gotten a few moments to show off her acting prowess as Natasha Romanoff/Black Widow, but she gets plenty of them in this film. She packs a punch here as the Avenger feeling the most guilt for what happened in "Infinity War", so she wants to do whatever it takes to make it right. If that includes hunting down and rebooting a broken-bad Clint Barton/Hawkeye (Jeremy Renner) for the second time, she'll do it. The actress gets to show off some of her dramatic skill set here.

Renner, like Paul Rudd's Ant-Man, is very effective here, once again taking a smaller piece of the pie and making the crumbs last longer than most actors would. Rudd, who gets more screen time than he did in "Civil War", has the film's funniest line, which will be getting recited all year long.

Speaking of funny, The Russos pull off an endearing and very funny story thread with Mark Ruffalo's Bruce Banner/Hulk. The visual effects pulled off during this endeavor are seamless and highly impressive. Motion capture has come a long way.

The humor is the key in these action-packed dramas. If The Russo Brothers don't make you laugh, the drama overwhelms and the film comes to a screeching halt. These films are what "Justice League" and "Batman Vs. Superman" failed to be: cohesive, well-paced, and fast-moving films. The Russos don't waste a single moment of your time, but they never pass up a chance to slip in a joke while the stakes are higher than ever. It's a signature ability adapted by James Gunn and Waititi: never bore the audience.

How many big-budget blockbusters can make you laugh one moment, cry the next, and jump out of your seat in rousing appreciation? "Avengers: Endgame" is on a very short list. It makes you feel everything intended by the filmmakers and writers. Christopher Markus and Stephen McFeely had an impossible task in writing this gigantic story that wraps up dozens of storylines and gives a fitting conclusion, and they aced the test. They found a way to pay tribute to the characters that we have grown to love, stuffing several moments of melancholy throwbacks and crowd-pleasing gestures into the movie.

A team-up sequence near the end is the single greatest action hero moment in the past 20 years of film. You'll know it when you see it.

Expect to cry. I did. I need less than two hands to count how many films I have cried in a movie theater. "Platoon", "Finding Nemo", "Road to Perdition", "Fruitvale Station" and some others. It's one thing to cry at a film at home during your second or third viewing. It's quite another to do it on first viewing in a theater packed with your colleagues. I found it impossible not to let go. After all, I've spent so much time with these characters, watching a number of filmmakers mold them into something more than heroes: Marvel turned these comic book heroes and villains (Josh Brolin's Thanos is once again a marvelous heel) and made them human people. They made them relatable, which is a superhero feat in itself.

Here's the thing. I entered "Endgame" with the highest expectations, and The Russo Brothers obliterated them with this final entry. It's more than just making a good movie; they found a way to take familiar-looking material — the wartorn heroes, unbeatable villain, big stakes — and make it fresh and engaging at the highest level. They made us look within ourselves and ask questions in the process. Not bad work for the directors of "You, Me, and Dupree".

Do other Avengers show up? Sure they do, but I won't spoil the details. I can't. That would be like eating a piece of warm apple pie and telling you about each bite, knowing it was the last piece in the diner. It has to be experienced individually. The leaking spoiler army should be placed in movie jail until the next Marvel movie if they give away anything special about the film. Just don't do it. Spoil the ending of "Box Trolls" if you must. Leave "Avengers: Endgame" alone.

As Samuel L. Jackson's Nick Fury said, this whole thing started out with an idea: Incredible people fighting the battles that no one else could. The idea fleshed out back in 2012's "Avengers", was a fun and fresh kick to the senses. Who knew it would turn into an Oscar-worthy experience that makes you, once again, step back and wonder about the limitless ability of blockbuster films? Who said big films don't have heart? This one has plenty.

"Avengers: Endgame" was everything I wanted and needed. An emotional wallop. Now, if you would excuse me, I need to watch it again.

As one character says to another midway through the film, "No amount of money can buy you a second of time." Touche, Russos, touche! 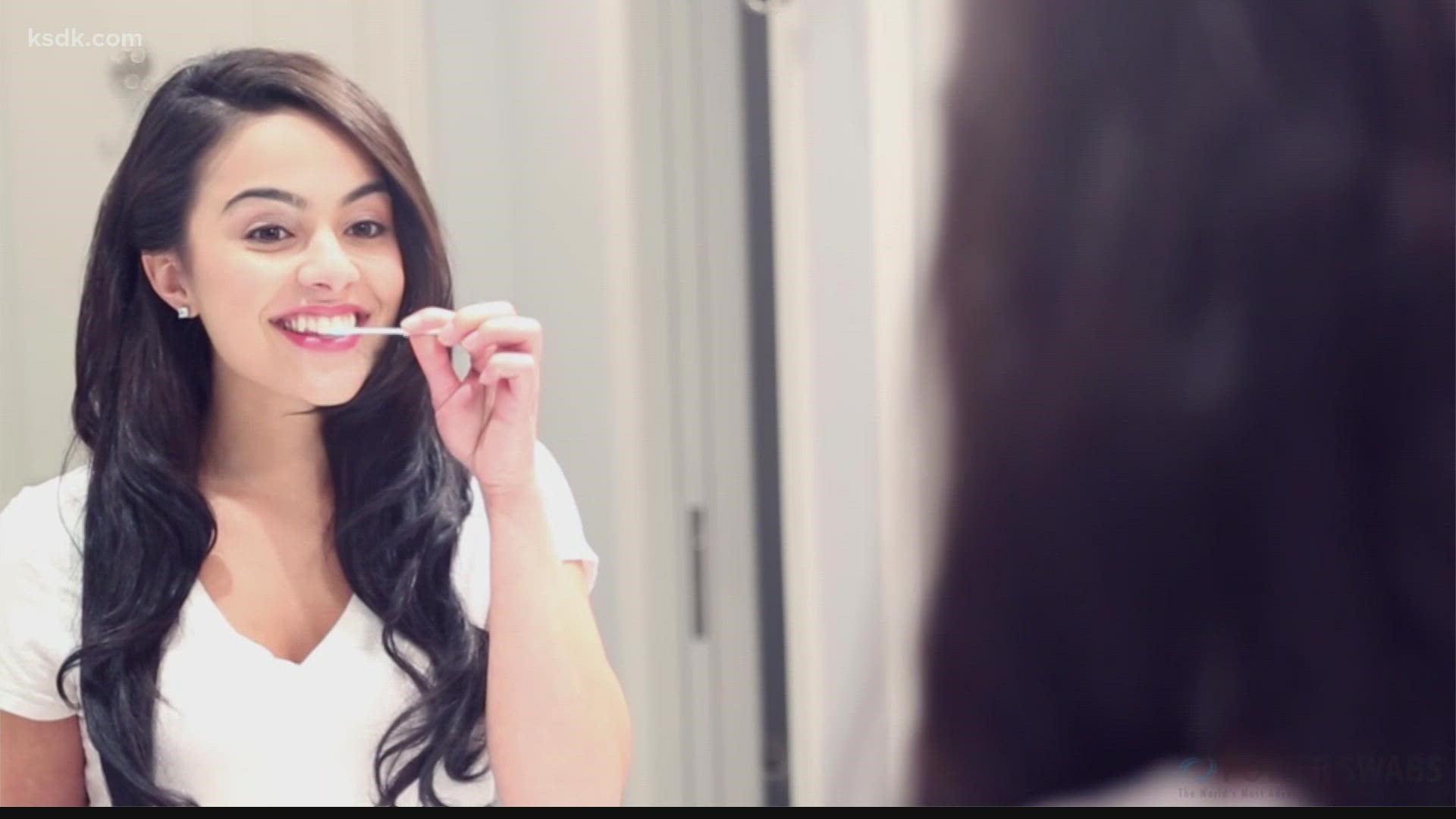 Achieve a whiter smile in minutes with Power Swabs