Narwhal's plans to open a new location in St. Louis with a building unlike any other

Early renderings show the structure has portholes, a second-story deck and a large narwhal statue on top leading the way 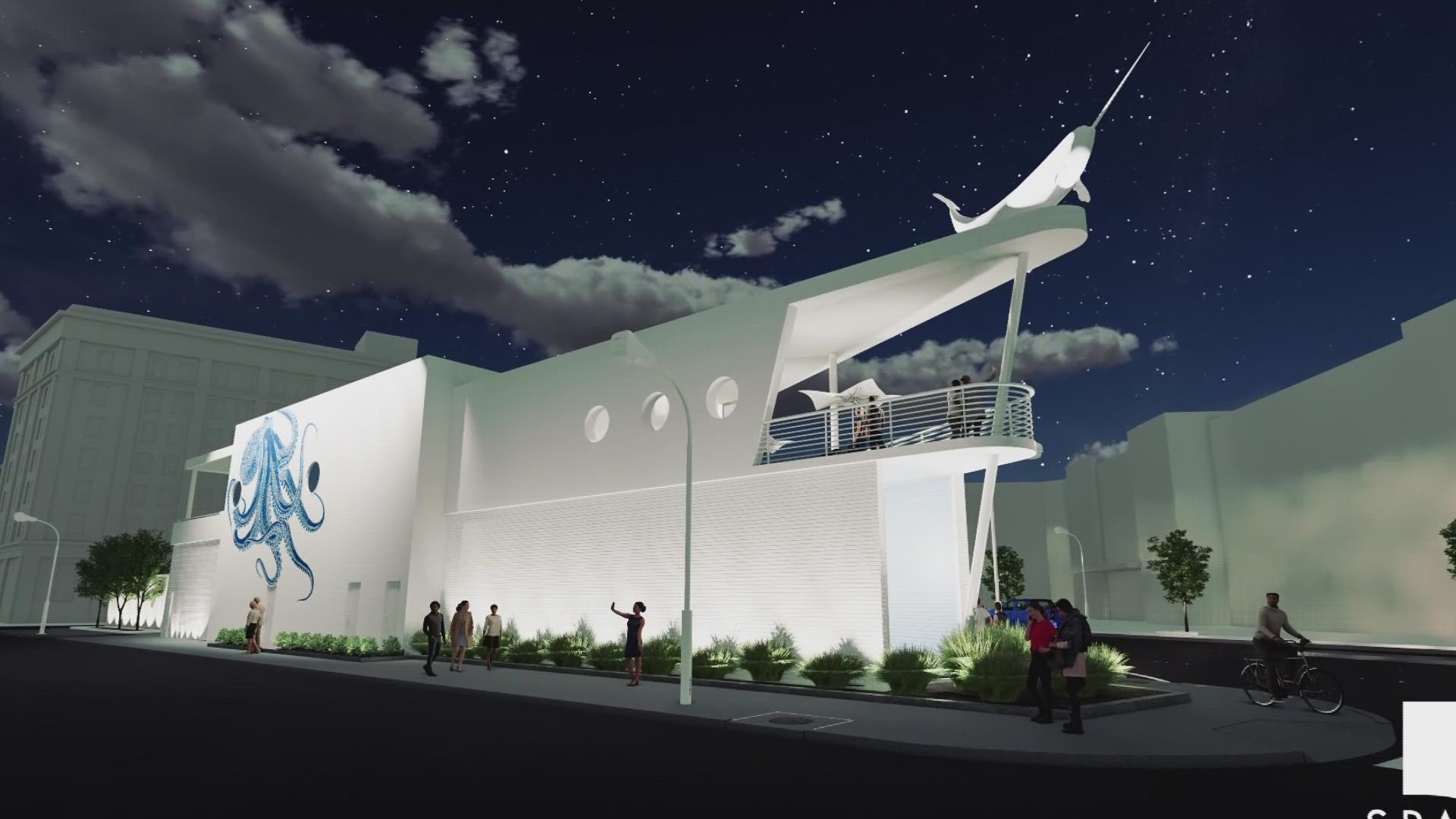 ST. LOUIS — A St. Louis cocktail shop known for whipping up frozen drinks is getting ready to set sail into The Grove.

Narwhal’s Crafted plans to build a new location along Manchester Road and the building will be quite the eye-catcher – it’s designed to be in the shape of a ship. Early renderings show the structure has portholes, a second-story deck and a large narwhal statue on top leading the way. The backend of the "ship" includes a ground-level patio with plenty of space to sit outside.

“The reaction has been overwhelmingly positive,” said lead architect on the project Tom Niemeier. “People seem to like a building with a strong concept.”

The “ship” would be situated on a triangular plot of land on the eastern edge of The Grove, cornered by Manchester Road, Chouteau Avenue and Vandeventer Avenue. There’s currently a parking lot and an old car service station at the location. Niemeier said the building will serve as a great entrance into the bustling Grove neighborhood.

“With a large roof deck similar to what you might see on a ship, we opened the building up to the Grove views and nightlife on the north side, and closed down the views to the south, for improved acoustics and sun shading,” he told 5 On Your Side. “We strategically located the porthole windows to provide some breeze and view to the south and building upon the nautical theme.”

Credit: SPACE
A rendering of the projected Narwhal's and Loaded Nachos building on the eastern edge of The Grove.

The project still has a few permits to gather and meetings to go through, but with the positive reception so far, Narwhal’s co-founder Brandon Holzhueter said they’re hopeful they'll get the community’s official letter of support that they need soon.

He’s cautiously optimistic that – if it’s smooth sailing from here on out – they could open in early 2023. The build itself will take at least a year, so delays on the timeline are possible, Holzhueter said.

Besides slinging frozen strawberry basil lemonades and hibiscus gin and tonics, the Grove Narwhal’s location also will serve up nachos. Holzhueter and fellow Narwhal’s founder Brad Merten started Loaded Elevated Nachos as a side business in January. It quickly evolved from a pop-up concept at their Streets of St. Charles Narwhal’s location into its own storefront right next door.

The "ship" building in The Grove will house both businesses in one.

Credit: SPACE
A rendering of the projected Narwhal's and Loaded Nachos building on the eastern edge of The Grove.

In the meantime, Holzhueter said Narwhal’s original location – which is not even a mile away near Saint Louis University – will keep “rocking and rolling” until the next project is complete, including more Loaded pop-up dinners so city residents can get their nacho fix without having to drive to St. Charles.

“Once this new project is completed, we plan to move the flagship Narwhal’s there,” Holzhueter said.

But don’t expect the Narwhal’s guys to let that Laclede Avenue location go to waste. Holzhueter said they love that location and plan to continue using it in some form or fashion. Options could include a “test kitchen” for even more experimental foods and drinks or possibly an event space.

“We are still weighing our options there,” he told 5 On Your Side. “But we’re going to do something Narwhal’s-related with it because it’s a great space.”

Narwhal’s is located at 3906 Laclede Avenue in St. Louis and 1450 Beale Street in St. Charles.