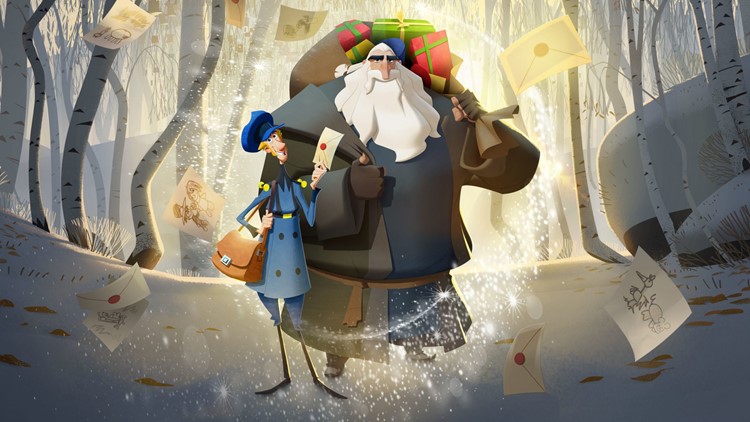 Review | Why Sergio Pablos' 'Klaus' is an instant Christmas classic

How did the idea of Christmas come together?

A story that one can only find in ancient books or kids stories deserved the big-screen treatment, and I can tell you that director Sergio Pablos' "Klaus" delivers on the hype that would surround the origin story of good old Saint Nick himself, Santa Claus.

Here, he's a depressed carpenter named Klaus (voiced by J.K. Simmons) hiding out in the countryside of a wasteland-filled city called Smeerensburg, where a pair of families duke it out in public fights and acts of unkindness on a daily basis. When the town gets a hapless-yet-motivated new postman, the spoiled brat of a rich Royal family named Jesper (voiced by Jason Schwartzman), Klaus finds himself and his dust-filled workshop of toys put to use.

He also forms an unlikely friendship with the young Jesper, someone in need of guidance nearly as much as the old man needs purpose.

The townspeople, including the heads of the two families, Mrs. Krum (Joan Cusack) and Mr. Ellingboe (Will Sasso), are hellbent on stopping this new wave of happiness that arrives with the unlikely duo. The resourceful Ala (Rashida Jones), a school teacher turned fish shop owner, aides Klaus and Jesper in stripping the darkness of the endangered city. You don't need a Christmas road map to see where this is going, but I won't spoil some of the inventive surprises that Pablos adds along the way.

What I can tell you is that you should add "Klaus" to your holiday movie rotation. It's endearing, engrossing, and very entertaining. It's a new Christmas classic that I will enjoy at least once a year with the family. There's a childlike earnestness to the production, but the deep dive of Klaus' personal story and tragedy that gives it some true depth. It has all the necessary trimmings of a winter delight, along with a couple new touches that make it unique.

The film is beautifully rendered, providing a visual spectacle. Pablos initially had the well-known 3D animation tapped for the look of the film, but he rightfully chose 2D in the end. It adds a crisp canvas with an old school vibe attached.

The voice work is stellar across the board, especially from Simmons. He's so good here, giving the tortured soul of Klaus a deeply moving layer of intrigue with each dialogue reading, filling the majestic presence with a much-needed shield of vulnerability.

We all know about Santa, the North Pole, and Christmas-but with a few new tricks and old tools, Sergio Pablos' re-imagining should easily stir the Christmas spirit inside even the largest cynic. It's a simple concept enlivened by creativity.

The Netflix production once again shows how the streaming network isn't afraid to take risks with its storytelling. All they do is give the bold creatives an outlet to play inside. One can only hope they don't let up with all the competition that is pouring in.

"Klaus" is a signature holiday film that is easy to love and inventive in its conception. Gather the family and enjoy it this month.

RELATED: Review | 'The Report' is a taut 9/11 thriller that deserves your attention

RELATED: Trailer Review | Ben Affleck's 'The Way Back' is a powerful display of art imitating life