If you liked Levy on Netflix's "Schitt's Creek," you will love his work here as Kristen Stewart's best friend.

ST. LOUIS — All of us want to be accepted. Isn't that the real dream? Being able to walk outside and not hear any whispers of quiet judgement, or a stranger trying to write the first chapter of your book after only seeing the cover.

For Abby (Kristen Stewart), the idea is simple. She wants to propose to her longtime girlfriend, Harper (Mackenzie Davis), on Christmas morning. Like any Christmas family drama, though, this must happen at Harper's parents house, who happen to be MEGA conservative. According to the matriarch, Tipper (Mary Steenburger, still potent in a motherly role), it would be insane for two women to sleep together in the same bed. All the while, Harper's father (Victor Garber) is running for mayor, and can't afford any distractions or obstacles from his own home. Oh, and Harper hasn't even told her parents about being gay and that her presumed roommate is actually her soon-to-be fiance. Add in Abby's loyal best friend (Daniel Levy), an eccentric yet loving sister (co-writer, Mary Holland), and steely older sister (Alison Brie).

Toss it all into a holiday cinematic cocktail mixer and give it a few shakes. The result shouldn't be hard to come by, but when you know how to execute a formula and cast some talented actors, an enjoyable film can be predictable. This is like a Hallmark Channel Christmas film on steroids, with just enough witty writing and precision to pass the test. Some of the plot developments are just a wee bit automatic and a few of the characters are a little too on the nose. It's like getting a giant candy bar; if you eat it in sections, the digestion isn't a problem. Clea DeVall, who most of us know as a veteran actress, co-wrote and directed this holiday treat, and it's a commendable first effort.

The setups, shots, and camera work isn't out of this world, but it fits the bill for what is needed in this genre. Yes, it all could have been a little dirtier-and that has nothing to do sex scenes or eroticism, and everything to do with how the film's construction and how pretty everyone seems to look. "Happiest Season" is one of those films where the makeup is always on point and the outfits/houses/apartments all look overly staged.

But after the year we've all had and the downtrodden nature of pretty much everything in 2020, a breezy and potent enough holiday film is just what the doctor ordered. If you can let your guard down here, it's a moderately enjoyable experience. Is it as raw and realized as "Family Stone?" No, but it's a pleasurable time spent with a cast that knows how to elevate material.

I may not be the biggest "Schitt's Creek" fan, but Levy steals the show here. Take the average best friend role in movies and they all look quite relative at some point, but Levy makes every scene with his Joe a true delight. He's the very well-dressed friend who interrupts your coffee shop confession to tell you he's watching a man leave his house. "If NSA can do it, so can I." Joe is the guy at the party who hits on Harper's ex-boyfriend (Jake McDornan) at a party, noting his muscular build and saying he benches "a thousand, at least" at the gym. Levy, who is like the James Bond-looking filter of his father, Eugene, can make a lot out of a little with his dialogue.

He delivers possibly one of the best speeches about coming out to your parents that everybody in the world needs to hear. It's patient, assured, and works its magic. He stands out in a sharp cast full of winners. Stewart has distanced herself from the "Twilight" success with accomplished performances, and Davis is one of Hollywood's bright young talents that is only beginning to stretch her legs. They make the central couple as realistic as possible while keeping us cheering for them. Cheering for them in the sense that mom and dad won't blow the roof off during the revelation. And please know, it's coming and very dramatically set up.

But Davis nails two speeches, the warm feeling flows, and the film ends with a nice, neat bow. The truth is, whether we want to admit it or not, these characters aren't that fictional. There's a ton of families who end up loving their kids less just because of a simple choice, and that's why films like these will sing for decades unfortunately. Acceptance is a steeper goal than people can imagine. And you bet closeted young men and women choose a big, politically-charged Christmas party to tell their folks who they are and what they want. "Happiest Season" is aptly titled, because it's the time of year where people can take chances and try to restart their life in the new year. As Levy tells Stewart at one point, "your old life is over, and your new one is beginning." This film glosses some things up and makes everything look shiny, but perhaps that was the intention. Present a fake world with the only real thing existing inside of it are the things people hide from their loved ones.

Thankfully, the movie isn't nearly as heavy as that last paragraph. Some things you take away from a movie are unexpected, revealing sad truths in a commercially-driven world. Maybe it's misdirection. Or it could be a matter of expectation.

"Happiest Season" went down easy, presenting a still timely situation with just enough wit and charm, along with a very capable cast. It has a decent amount to say and gets enough of it right.

Can I mention Levy one more time? He's so good here, I may need a Joe spinoff film. Maybe I'll give that Netflix show another chance. 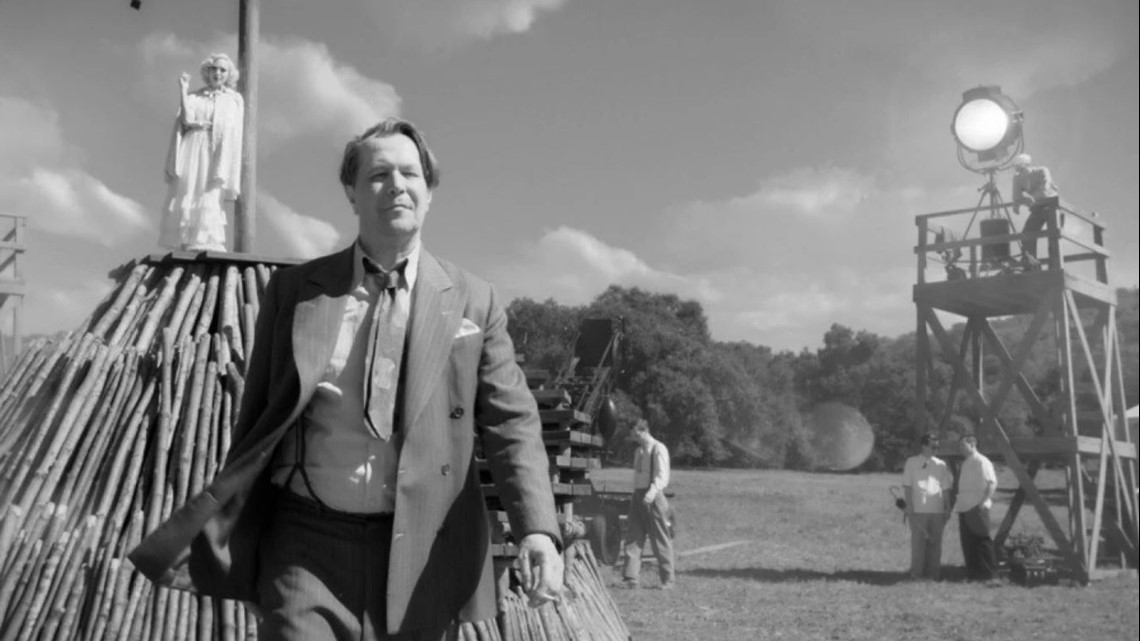 Review | David Fincher and Gary Oldman bring 'Mank' to vivid life
Oldman, who won an Oscar recently for playing Winston Churchill, delivers another award-worthy performance as the writer of "Citizen Kane." ST. LOUIS - Herman Mankiewicz (Gary Oldman) simply had a need to impose his will.