As a father and daughter running around New York trying to solve potential martial trouble, Rashida Jones and Murray are terrific together.

ST. LOUIS — Laura (Rashida Jones) has lost the ability to whistle and is suffering from writer's block on her second novel, two things that pale in comparison to the main dilemma in this young mother's life: She suspects her husband and father of their two kids, Dean (Marlon Wayans), may be cheating on her. It's safe to say that this New York mama is having a bad month. For better or worse, Laura's dad, the globe-trotting and overbearingly charming playboy father, Felix (Bill Murray), is up to the task of helping her get to the bottom of this mystery.

If there's one thing I love about Sofia Coppola's work, movies that she writes-directs-produces, it's that she discusses big life ordeals in a very natural and patient way. That's how you easily find the road to poignancy, by taking your time as a filmmaker and storyteller. Coppola, who will forever be linked to her "Godfather" auteur dad, Francis. But for my money, I'll take a Sofia tale any day of the week over her dad's revered gangster madness. With her new film, "On The Rocks," she tears into that existential crisis that young couples and people confront when they start families and begin reflecting on where they've been, and more importantly, where they want to go.

Laura just wants the truth, but isn't up for her dad's detective shenanigans. However, like the audience, she can't resist a night out on the town in New York with her dad, bar-hopping while they stomp out the past and figure out what Dean is up to. The biggest obstacle standing in their way is the fact that Felix can't go anywhere without making a new friend, flirting with a potential new face, and telling her daughter about the origin of men and their needs. A man she loves dearly, but also looks for the second seatbelt when attending a roller coaster ride. After all, there's a reason Felix may know a thing or two about what Dean may or may not be up to.

The rest is for you to discover at a theater this weekend or on Oct. 22 on Apple TV+. A movie that I genuinely enjoyed is only around 90 minutes long, but stuffs that time with witty car rides around the Big Apple, cozy family time at a classy New York apartment, big time parties at art dealer homes, and various bars around town. While the main idea revolves around Laura and Dean, the juice of the film comes from the scenes with Murray and Jones. The actors create the kind of chemistry on screen that has nothing to do with romance (obviously), but a pair of actors who know how to work together. You don't question their relationship for a second, but want to know more about it. The more time spent with them, the better the movie gets.

While this is only the second time Murray has played on Coppola's playground, you can sense the two have a shorthand working relationship around the camera, because it all comes off as effortless and confident. Every movie wants to do their best to submerge you in their world, that they flex too hard and wear out their welcome by the time the climax is gearing up. Here, there is no big melodramatic finale or outlandish "I love you" scene in the middle of a crowded street.

With Coppola, it's making movies that connect themselves to a part of her life, which has always been an intriguing idea. It's not hard to stretch the thought that in some vivid way, Felix is another version of Francis Ford Coppola, and you can see a lot of Sofia in Jones' Laura. A woman who not only has to find a way to tell different stories for the masses, but lead a strong life as a mother, wife, and most importantly, a person. So much of Laura is tied to her father and his actions, past and present, that she feels stuck by everything. This movie is about her becoming unstuck, but there's more to it than just a big reveal or lesson.

I love that about Coppola's movies. They burn slow and move quick at the same time, sweeping you up in a familiar problem, but layering the film with real heart and soul. The movies that feel lived-in, like you're putting on that comfy hoodie or lazy pants right as the story begins, are the best. Nothing seems overplayed or too set up. Where Laura, Dean, and Felix go in this film is realistic, hopeful, and blunt at the same time. The nonchalant atmosphere is the secret sauce here.

Murray is terrific, even if this is Jones' film. For the first time, she's not standing behind a leading man or trying to carve out a piece of the screen for herself. She can transmit six feelings with a single stare and knows how to handle a piece of dialogue with care. An extension of Coppola on screen, Jones uses her own real life tale of fame (you may know her mother and father) to tell a conflicting yet important tale of womanhood that doesn't beat you over the head by the end. While she's been good elsewhere as the girlfriend or wife, Jones' best is saved for here.

Murray does his best to steal the show, showing up and dazzling us with Felix's wide array of metaphors, life lessons, and even a cunning ability to get out of a traffic violation while weaving through traffic. He's the Casanova who believes the voices of women are being deaf to him, unlike every other noise and urge in the world. A man who can't be anything else but what his DNA label reads, Murray finds easy comfort and rhythm in Felix's eventful and busy life. We're never exactly sure what he sells or the business he conducts, but there's a good chance we'll be listening if he starts talking about ancient Greeks, private planes, and what language the waitress is speaking. Murray is so good in these kind of "take it or leave it" personas, that we accept Felix, warts and all.

It's very nice to see Wayans in a role like this one. Comedy comes easily to him, but this isn't just a thankless role where the actor portraying a key cog in the story only gets a monologue at the end to lay down his defense. Wayans gets to step into dramatic territory, especially late, and it's good work. Jenny Slate doesn't get much to do, but creates a few good laughs and headshakes as as a fellow school drop-off ranting mother who identifies as a friend to Laura, but we aren't so sure the latter soul would agree. Kudos to

If I could be honest with you, I didn't want "On the Rocks" to end. It was less of a movie, and more like a chapter in the lives of these characters. The same could be said for "Lost in Translation, a film that grew on me over years and multiple viewings. The patient, poignant stories that hit hard without trying too hard are always the life of the party.

The takeaway here is simple: I want Murray and Coppola to work together more often. Whatever they have in the world of filmmaking should keep going. There's a poignant, patient, and earnestly romantic feel to "On the Rocks," a honesty that can't be acquired quickly. The filmmaker refuses to play by genre convention, instead bouncing between them or merely creating her own.

I wanted Coppola's tale to keep on going, and I think that's one of the best things one can say about a flick. 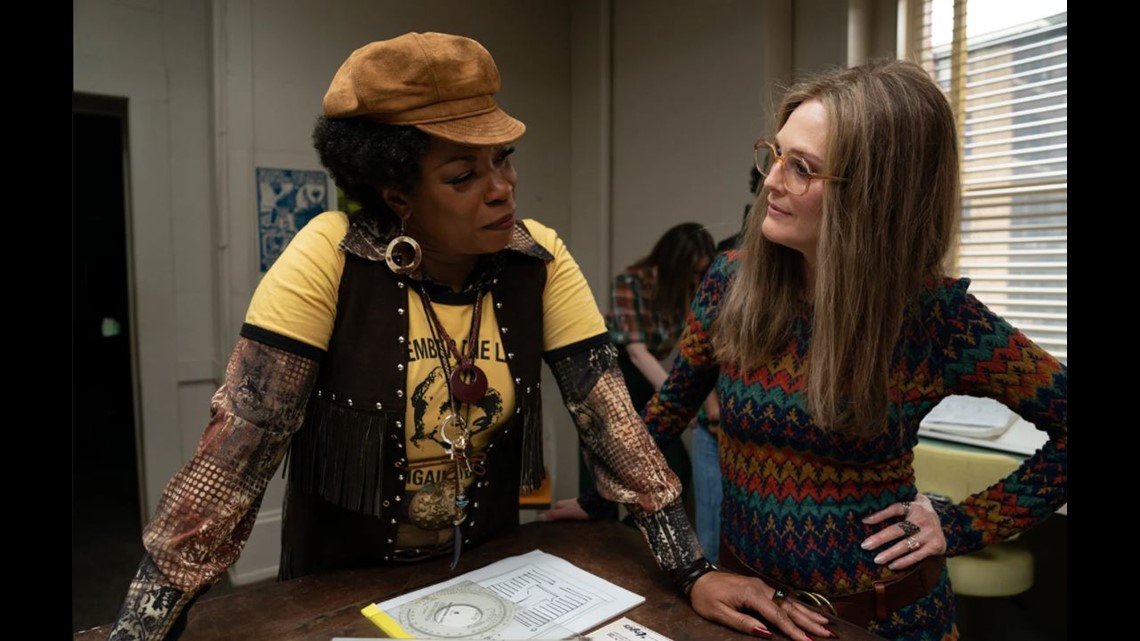 'The Glorias' Review | Julie Taymor's unique touch offers the feminist icon biopic a timely power
Julianne Moore and Alicia Vikander make a great 1-2 punch in bringing Gloria Steinem's incredible life to screen. ST. LOUIS - When the powers that be wouldn't let Gloria Steinem write about the women's movement, she decided to get out on the road and speak about it.