Riz Ahmed is electrifying as a drummer experiencing hearing loss in Darius Marder's salute to the deaf community. A visceral experience.

ST. LOUIS — "Sound of Metal" starts loud and ends in a hushed quiet.

When we first meet Ruben (the amazing Riz Ahmed), he's waiting for his cue behind the drums of the heavy metal rock band he fronts with his longtime girlfriend, Lou (a soulful Olivia Cooke). Shirtless and in control of his surroundings, Ruben can't be touched. I've always thought musicians existed on a higher plane than the rest of us, even if just for a few minutes. They have an ability to play an instrument or have a voice that cuts through the complexity of a room. This is everything for Ruben and Lou, an escape from a past that takes both of them to keep outrunning.

But, like most films in this vein, there's a painful catch that is going to wreck the lives of these two lovely people. In Darius Marder's film, the breaking point is reached when Ruben starts to experience considerable hearing loss. So bad that at one point, he goes completely deaf during a show and walks off the stage.

I'll spare you the rest of the juicy details, because part of the enjoyment here is the ride. It would be like me trying to describe a Led Zeppelin song. The description would pale in comparison to the experience. But I will say this: "Sound of Metal" is not a music film; it's an exploration into the mind of a person who has suddenly lost his hearing. I've never seen a film dedicate so much time and care to a story about deafness. Believe me, punk rock fans will love the few scenes of Ahmed pounding the drums and Cooke howling at the moon during a show, but this movie is about rediscovering the sound of life. For Ruben, it's like stripping a car down to its bare essentials, and trying to reconfigure.

Being ex-addicts, Ruben and Lou are tied to each other in a powerful yet unstable way. Their usage problems is their bond, but that then grew into a love that faces its harshest test yet. I'll be honest with you and admit that I was on the verge of not liking this movie as much if a certain plot development was realized. First, it would have traveled the same, dirt-filled road that a hundred other movies did. Second, it would just take the hope away all together. What am I talking about? You'll have to find out for yourself.

I assure you the time won't be wasted. This is high-caliber filmmaking, and its genesis is the sound design and mixing in this film. As in, you don't experience Ruben's fight from the outside. Everything he can hear, or more importantly not hear, is filtered into our ears as the story plays out at a deaf community center, run by Joe (Paul Raci, a deaf musician and veteran in real life). Many of the sounds in the film are distorted, or sent through a tiny wind tunnel before they get to us. It's the groundbreaking element of the film that powers everything else. It allows Ahmed to go searching in character without any obvious road signs. Marder is allowed to tackle a love story from a different angle. We are sitting in Ruben's driver's seat for the duration, and it adds a moving element to the operation.

It's the epitome of innovation in sound design for a film. In one scene, arguably my favorite, Ruben communicates with a deaf kid by gently banging on a slide. With the kid's ear to the top of the slide, Ruben gets to play the drums a very different way. Non-verbal cues are vibrant equities in this film, such as the scratch of an arm or the twitch of an eye. Marder wrote the screenplay with his brother, Abraham (who also composed the film's music), with Derek Cianfrance contributing to the construction of the story. If you know Cianfrance, a filmmaker with two bolts of lightning in "The Place Beyond The Pines" and "Blue Valentine," you will recognize the nonchalant restraint that runs through this film.

Sometimes, less can be more, but if you know how to create a scene without words that moves and compels the film forward, that's the sweet spot of direction. Marder hits it here.

He has a fiery engine in Ahmed. He is absolutely electrifying as a man who is lost between his past and future due to a loss of hearing, and not drugs. This is one of the most gutsiest performances in years. It's not just the way Ruben speaks, but the ferocity that he puts words together with. Music and Lou were the two things holding his life together, and now he has to rebuild his entire life. Without Ahmed's stellar portrayal, the movie doesn't soar as high.

That doesn't mean Cooke doesn't get her own chance to shine. While her screen time is significantly less than Ahmed, her presence hangs over the entire film. She was Ruben's salvation once, and that connection doesn't die easily. The incredible part, and this links back to the script, is how quickly we buy Ahmed and Cooke as a couple early on in the film. It's not an overload of makeup or manner of speaking, but an indelible connection to a role that requires no further explanation. Cooke gives the film all the firepower it needs.

But the real surprise for me here is Raci. As the comforting yet firm new father figure in Ruben's life, Raci's Joe is the secret ingredient that gives the film its backbone. Being deaf AND in a band in real life, Raci's authenticity transfers to the screen instantaneously. I loved his scenes with Ahmed, like watching a couple of actors playing cinematic chess at the highest level. And it's not long monologues or scenery-chewing performances; just two actors at the top of their game. We all need a Joe in our lives, but let's just say Ruben needs him more.

"Sound of Metal" won the Oscar for Sound Design when the two hour film hit the credits, but I am sure that's just the tip of the iceberg with this hard-hitting yet poetic film. All the accolades it gets are deserved. Some may say it has a "Whiplash" type effect due to some of the sound techniques, but Marder's film lives in a league of its own when it comes to paying attention to the vivid details of being deaf. That's the film's true triumph. Championing deafness not as a detriment, but simply a new path to walk down and find peace with.

The film wisely employs closed captioning that can't be turned off. No, this is not a shot at the people who despise foreign language films due to subtitles. Marder's usage here is a salute to the deaf community, as if he wants the people watching the film to get as comfortable inside the skin of a deaf person as Ruben.

The reluctance to tie a neat bow on the end of the film is something to admire. Most films would have given Ruben an easy way out. Others would have drowned the tale in bleakness. Marder's film hits that bullseye between honesty and hope.

This film starts loud and ends quiet. A reflection of one man's world turning upside down. But maybe, just maybe, he got something out of the process. I think you will too.

"Sounds of Metal" is in select theaters on Friday, and streams worldwide on Dec. 4 via Amazon Prime Video. 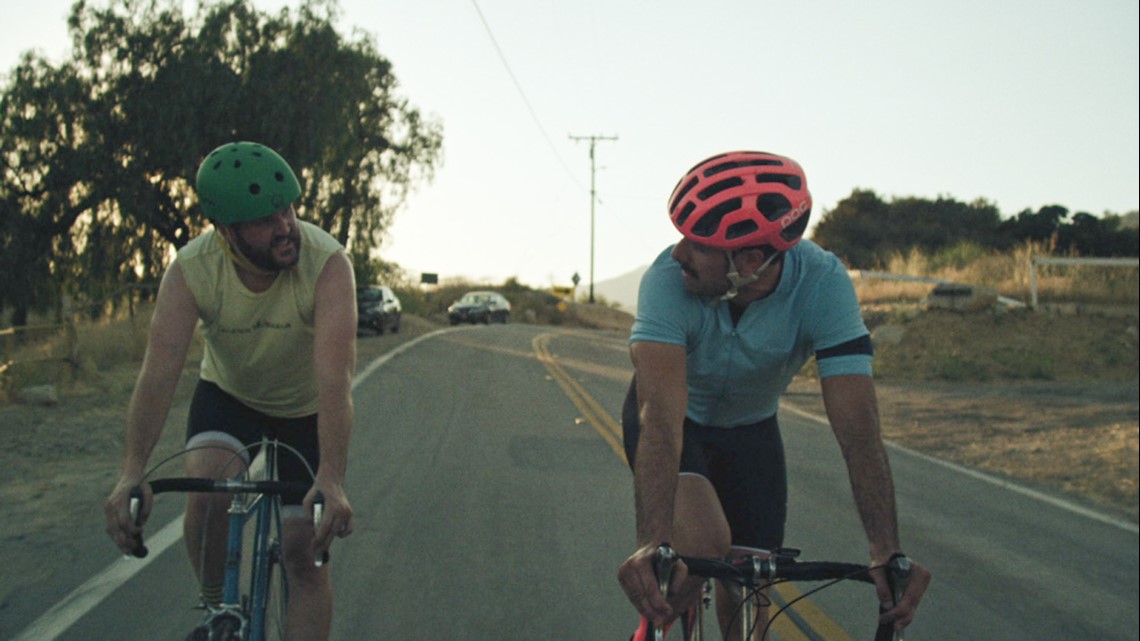 Review | Inventive and heartfelt, 'The Climb' ranks among the top films of 2020
Two friends. Two bikes. One confession after another. Inspired by a time-tested real life friendship, the movie generates big laughs and is original. ST. LOUIS - Some friendships stand the test of time. They are pure, unfiltered, and able to withstand the most torrential of bad times downpours. They are unbreakable.