ST. LOUIS — When the powers that be wouldn't let Gloria Steinem write about the women's movement, she decided to get out on the road and speak about it. Soon enough, she was joined by thousands and eventually, millions of fellow ladies fighting for women's rights.

Known as a feminist icon and owner of one of my favorite quotes that unfortunately can't be published here, Steinem's life was the epitome of Frank Sinatra's "My Life." A life force that is still running strong at 86 years young, Steinem's mark on the world and feminism will be immeasurable for decades. She fought for every female soul in the world, reaching as far as India, where she spent two years at the beginning of her movement.

If there was a director that could properly capture Steinem's effect, it was Julie Taymor. She was the innovative director that created the Beatles rock romance, "Across The Universe," and she also gave us Salma Hayek's ferocious Oscar performance in "Frida." Finding the heartbeat in glorious femininity is what she does best, and this film rides on the director's shoulders.

Julianne Moore's radiant screen persona and strength in making you a believer also keeps this overlong biopic running. Yes, the 150 minutes may wear on you at times, as the procedural stopping points for Steinem's journey are touched upon in the film, and we are met with not just one Gloria, but four. Oscar-winner Alicia Vikander is convincing as the younger Steinem, with younger actresses Lulu Wilson and Ryan Kiera Armstrong putting in solid work as the teenage and child years of Gloria.

If the package seems familiar, the follow-through is refreshingly different. This approach, finding multiple actresses to play the icon in parts that are more than mere cameos, allows the powerful message of Steinem to live and breathe inside the film. After all, she never wanted acclaim for her activism, just change. Deciding to tell this story, based on Steinem's novel, is an ingenious method that pays off.

It reminded me of what Todd Haynes did with "I'm Not There," the Bob Dylan biopic which featured male and female actors portraying the singer-songwriter. Here, Moore and Vikander make a great team in showing us the beginning, middle, and temporary end of the Steinem effect. A woman who was fearless at a very early age, thanks to a life that was always on the move due to her traveling salesman-father (a very, very good Timothy Hutton).

Taymor's film isn't afraid to slow down and investigate or observe the turmoil that Steinem faced during her trials and tribulations. The part of her life where she wrote catchy, click-bait type pieces for high-profile newspapers, but refused to keep doing so at the fear of being typecast. Gloria could have easily packed it in and did what the men in power told her to, but she refused. Due to that resistance, women are more powerful today than they ever have been.

A sincere hat tip to Bette Midler for being able to walk into any film and make a dent. Janelle Monae, whose Dorothy Pitman Hughes is only around for a few scenes, easily radiates power. Lorraine Toussaint is a thriller whenever she's onscreen, cracking jokes and shifting to a serious tone without effort.

Taymor pulls off some intriguing visual tricks, taking us inside Steinem's headspace as the movement carried on. The same colorful explorations she found in "Across The Universe" is put to fine use here.

The writer-director knows how to make a scene count, swinging so much power into each scene. She knows it's all a little much on the head at times, but her message here is clear: Remind us who the powerful women were who stood up during a time when it wasn't safe or a lucrative idea.

There's a scene towards the end that brought it home for me. All the Glorias are on a bus talking to women from different eras, and the scene already had power gathered when the camera closes in on one particular person towards the end of the shot: Steinem. It's the only spoiler I'll give you. She shows up and cements the film.

Coming shortly after the world lost the courageous Ruth Bader Ginsburg, the Gloria Steinem story is timely and should be required-viewing.

"The Glorias" is far from perfect, but the film makes an impact.

**THE GLORIAS is available for purchase on Digital and Streaming exclusively on Prime Video starting September 30th. 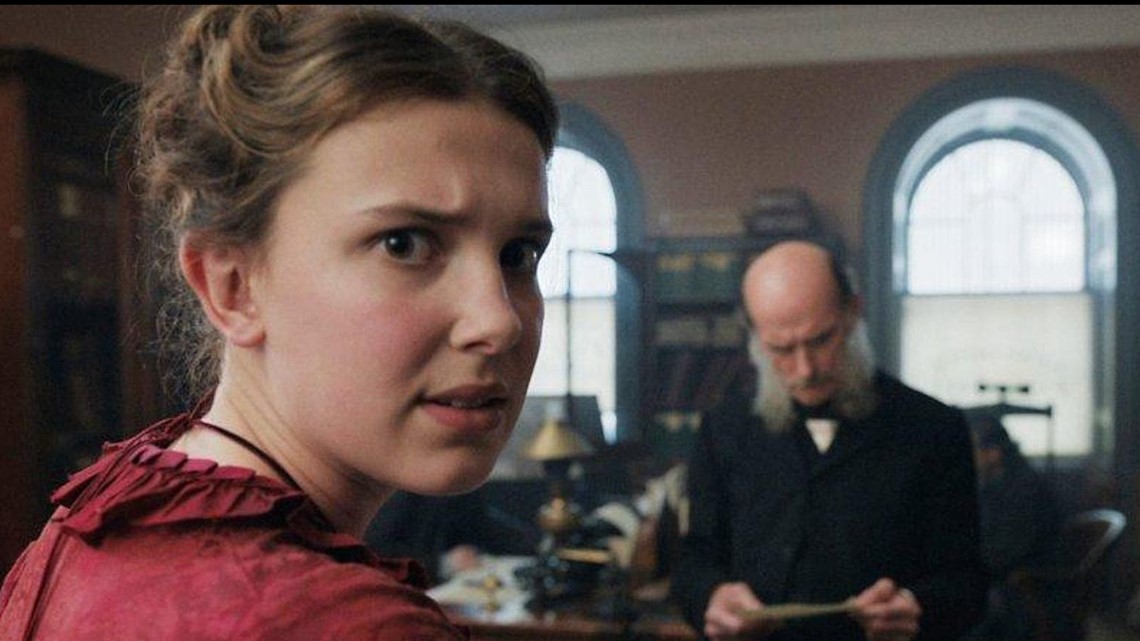 Review | 'Enola Holmes' proves that Millie Bobby Brown is a bona fide star
"Strangers Things" fans will adore seeing Brown carry the adventure tale on her small yet potent shoulders. Read why this one needs to be seen. ST. LOUIS - Did you know that Sherlock Holmes had a sister? Did you know she may be smarter than him?!?