Denzel Washington and Jared Leto are top notch in John Lee Hancock's whodunit thriller that doesn't exactly play out like you think it will.

ST. LOUIS — "It's the little things that will get you caught."

Joe Deacon's (Denzel Washington) words carry over like stones to his partner, Jimmy Baxter (Rami Malek), the young hotshot detective working with "Deke" (who is now a uniformed cop in LA county) on a new homicide, one that may tie back to one of Joe's older cases.

With John Lee Hancock's "The Little Things," it's best that you know very little about the plot outside of its general setup. A slew of young women are being murdered, and the killer is running decade laps on the badges. Joe and Jimmy find the lead suspect, a crime fanatic named Albert (Jared Leto, having a whole lot of fun), too good to be true, but worth pursuing. But time has a way of being cruel to both the good and the bad in Hancock's world, which he wrote and directed.

I liked how Hancock's script favored more introspection with the detectives and their lives, instead of the killer and the crimes. In this movie, it's Washington and Malek who get the main course of the meal, with Leto's possible killer looming on the outside. The trailer allowed you to see a link between the two cops, but thankfully didn't explain or show too much of it. But the dialogue-coupled with a patient score by Thomas Newman and polished cinematography by John Schwartzman-doesn't overpower you with details. Just clues of a bigger picture, one that the filmmaker wants you to figure out for yourself-like a toymaker watching a bunch of kids play with it.

Here's the thing. "The Little Things" is a slow burn experience, more meditative than energetic in "the cops hunt a serial killer" genre-which in my opinion lends Hancock's film the upper hand. It keeps you more off-guard than assured, even in its early development. The unconventionality of the proceedings extend beyond the whodunit in this tale, and it's a testament to the filmmaker's willingness to stare into the abyss. That's what Michael Connelly said in the preface to one of his crime novels. The former Los Angeles crime scene writer thanked the detectives who had to stare into the abyss for our sakes.

That's my main takeaway from this film, which deals with grief more than "why and "who" for these two hours. How one action can alter an entire life, good or bad soul, upending everything that came before it. While it's not a celebrated or highly entertaining form of art, the introspective approach here was appreciated.

A top notch cast sure helps move the needle. Washington can do so much with so little, which isn't a crack at the script, but more of a glimpse of true talent. He makes you yearn to see what's haunting Joe's everyday life, but it's never overplayed nor does it clog the movie's flow up. Other actors would have set Joe too ablaze early and often; Washington just digs away at the role with an authority few artists of this trade are given.

He pairs well with Malek, who makes the most of an underwritten role. This is as normal of a role as it gets for the Oscar-winning actor who will forever be welded with Freddie Mercury. Hancock's rapid fire yet weighted dialogue allows the two actors to knock off the ice of a forced confrontation midway through the film.

But it's Leto who steals the film. He's having way too much fun playing a guy who may be a psycho, or could just be in love with the idea of a psycho. I feel like we got the twisted mind that was promised in "Suicide Squad," yet never showed up. Leto gives Arthur all the registered creeps and bad vibes, but the actor conveys mystery very well, keeping us guessing. Every viewer turns into a detective on the team, fostering clues and revelations from past films to help decipher the new film's code. Leto never tips his hand.

Hancock has a few tricks up his sleeve, though, something that made the ending hit harder than I expected, even saving the film's overall quality. Don't quit at the climax. Just wait for the very end. Trust me on this.

Would I add "The Little Things" into the upper echelon of detective flicks? No. At the moment, it's a solid and unusual dive into the darkness from both sides of the line, even with its flaws. There's a scene towards the end (shovels are tossed) that semi-jumps the shark, and blasts the film's realism into ridiculous areas. Possibly a way to speed up the third act, I found it uneven and almost unwise. But the ending, or shall one say the quota, made me a fan.

Bottom Line: Sometimes, the little things can add up to a good film, just like a collection of tiny moments can start to weigh on one's conscience. Here, it's the acting and final touch of unconventional nuance that add a sinister yet hopeful touch to the experience of "The Little Things." A film that ventures into unforsaken territory, unafraid of the backlash it has coming for avoiding the easy way out in its genre. 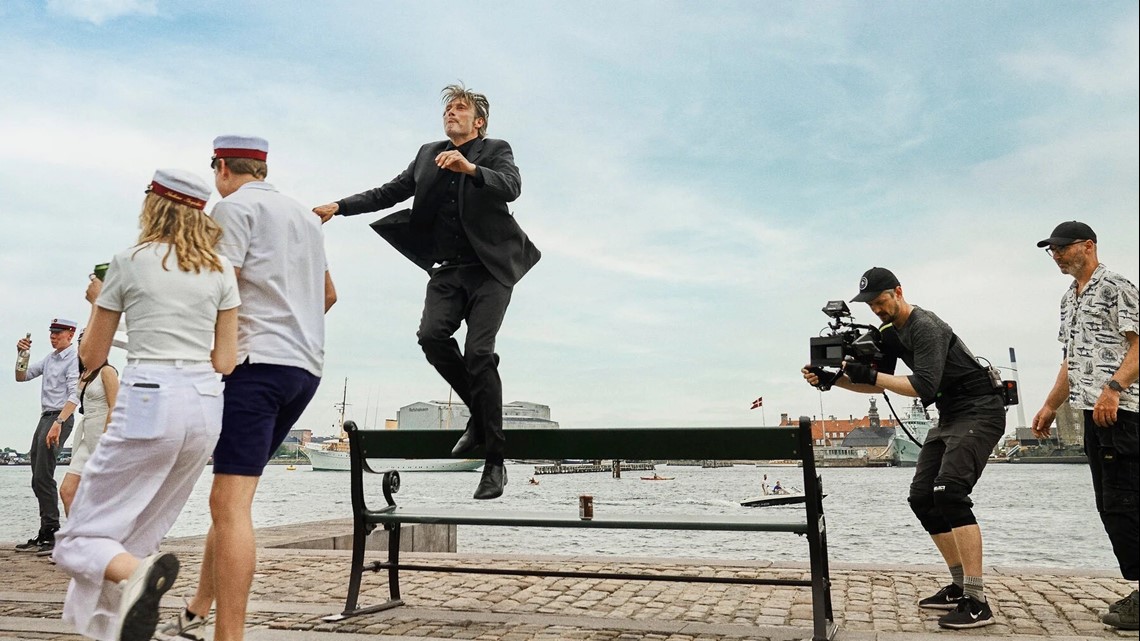 Commentary | Why I love the ending of Thomas Vinterberg's 'Another Round'
Dan Buffa discusses Mads Mikkelsen's big moment during the film's invigorating finale. ST. LOUIS - Late in Thomas Vinterberg's "Another Round," Martin (Mads Mikkelsen) gets a text. A family man who once promised those around him more energy and thirst for life, chasing after it with participation in a drinking challenge with friends, Martin found himself both embarrassed and enlivened by recent events.