A failed attempt to reintroduce red wolves to the Great Smoky Mountains left a lasting legacy in the park and raised awareness of the critically endangered species. 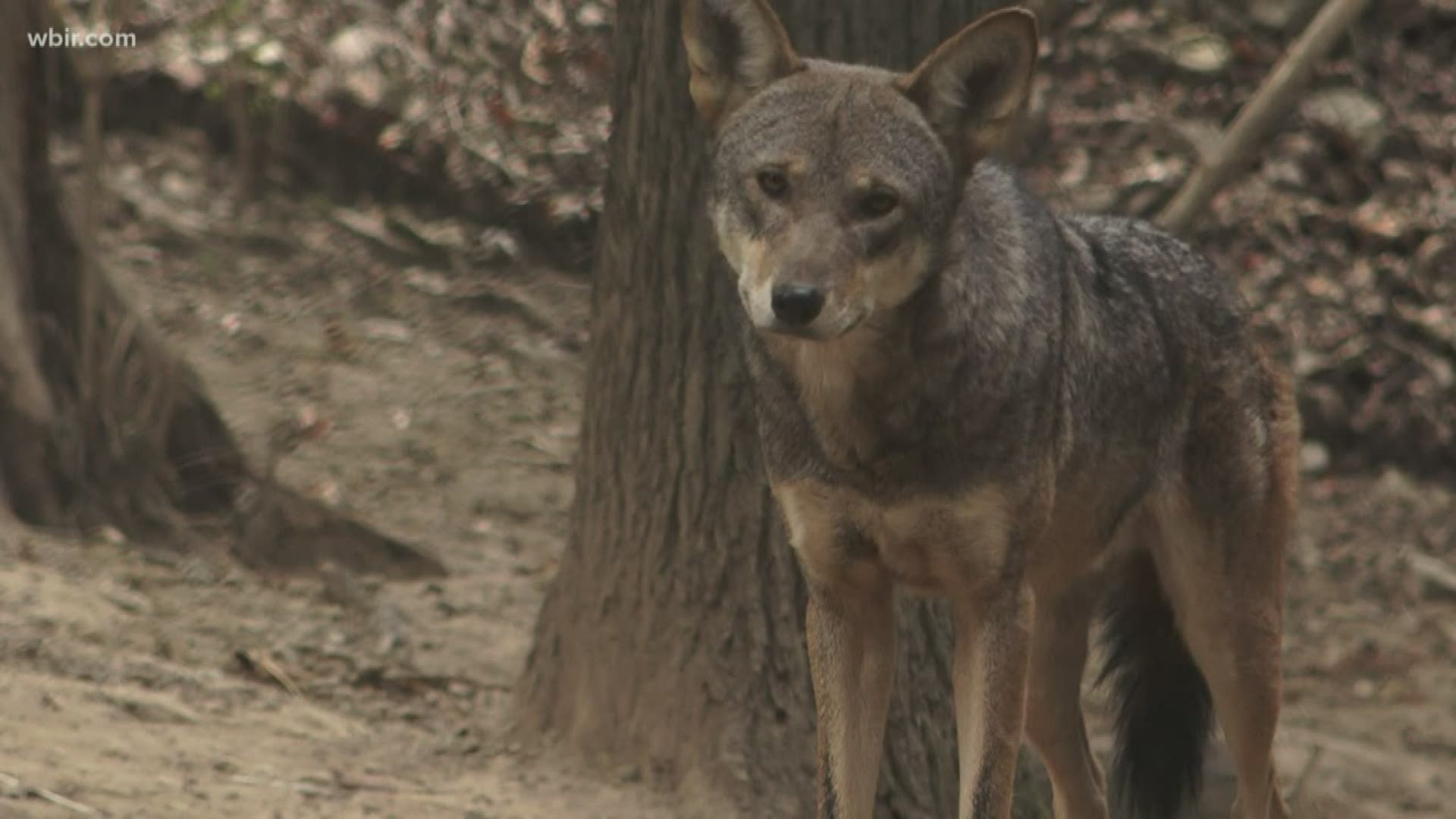 KNOXVILLE, Tenn. — If you count every red wolf in the world, you'll find almost four percent of the entire population in one fenced enclosure at Zoo Knoxville.

"Unfortunately, the outlook is pretty grim at this point. We've only got around 25 left in the wild right now. There are around 250 in managed care and we have 10 of them at Zoo Knoxville.  The zoos are keeping this population alive," said Kelly Cox, assistant director of animal care at Zoo Knoxville.

The critically endangered species is known as "America's wolf" because it is the only species that lived entirely within the boundaries of the United States without extending into Canada or Mexico.

"Most people don't know there was ever a red wolf on the landscape. We have a habitat set up for them here that is out of the way. That is done by design because red wolves are not those vicious wolves that we portray them to be. They're very secretive and very shy. So, giving them a place to hide and blend in with their natural surroundings was imperative," said Cox.

A big reason red wolves were nearly eradicated is because governments put a price on the animals' heads.  For decades, bounties were paid to kill a predator that hurt agricultural operations and made farmers see red.

The U.S. Fish and Wildlife Service (FWS) put the red wolf on its endangered species list in 1967.  In 1980, it took the drastic step of capturing all remaining red wolves from the wild in Texas and Louisiana in order to breed them in captivity.

When the red wolf's numbers were strengthened through captive breeding, the first family was released back into the wild in 1987 along the coast in North Carolina.

In 1991, the program to save red wolves found another place to try to let them roam free.

Retired wildlife biologist Kim Delozier was involved in the reintroduction of several species in the Great Smoky Mountains National Park.

"The Fish and Wildlife Service actually contacted us about using the Smokies as a place to try to restore red wolves. It was introducing a top predator back into the ecosystem," said Delozier.

Credit: WBIR
The first red wolf reintroduced to the Great Smoky Mountains steps out of a fence enclosure in November 1991.

The first red wolf family stepped out of a large cage and into the wild of the Great Smoky Mountains in November 1991.  Two more families were released in 1992 at Cades Cove and Tremont.

Not everyone celebrated the return of a renowned hunter.

"A lot of people were skeptical about bringing wolves in. I think farmers were concerned and they should have been. It was amazing how the wolves operated. There would be a cow with a newborn calf, and one of the wolves would come up and start battling the cow. The other wolf would circle around behind and grab the calf and take off with it. So, they're very smart," said Delozier.

For all the deer and other prey inside the national park, it was not enough to feed families of wolves.  Many animals ventured outside the park in search of food.

"A lot of these animals left the park and went outside and caused some issues," said Delozier.

One female roamed more than 40 miles outside the national park and was tracked to the Holston Hills neighborhood in North Knoxville.

Credit: WBIR
A red wolf with a radio collar walks through Cades Cove in the Great Smoky Mountains in the 1990s.

"When I see a snake, I get a shovel and let him have it. I don't know what I'd do with a wolf," joked one Holston Hills resident in 1996.

"When you talk about large mammals like wolves, elk, and bears, this park isn't big enough to have an isolated self-sustaining population just inside the park. When they leave the park there is often conflict with landowners," said Bill Stiver, GSMNP supervisory wildlife biologist.

Several wolves that left the park were killed or died of unknown causes. One was poisoned when it drank antifreeze beneath a vehicle in Blount County.

The real life-and-death struggle was not based on keeping the animals within the park boundary.  It was the inability to keep new litters alive.

Around 40 red wolf pups were born in the wild in the Great Smoky Mountains.  None of them survived.

"The wolves would mate. They would have pups. The pups would die of parvo virus. When you have no reproduction, you can't have a population," said Stiver.

The red wolf struggled with disease and starvation.  Its reintroduction also coincided with the arrival of a wily competitor.

"We had coyotes moving into the park in the early-to-mid 1980s.  When they first brought red wolves in, the coyote population was relatively small," said Delozier.

But coyotes continued to expand and compete directly with red wolves for food.  The coyote also threatened to contaminate the endangered gene pool.

"Because there were few numbers of red wolves, there was some hybridization that went on. They did cross with coyotes. And, of course, that's going to spell the doom of the red wolf if they hybridize," said Delozier.

Credit: WBIR
A coyote in East Tennessee in the late 1990s.

In 1998, the Fish and Wildlife Service announced it would be ending the red wolf experiment in the Great Smoky Mountains.  All but one of the wolves released in the park with radio collars were recaptured.

The red wolf experiment in the Smokies failed.  But the park learned lessons that made a lasting impact. Specifically, the experience with red wolves helped park leaders know how to build public support for the reintroduction of elk in 2001.

"I think what we've learned from the red wolf at least is the process. With the red wolves, there were public meetings where people come out to voice their objections to unrelated things the government is doing. We didn't just have public meetings and hope people would show up. We met groups directly and educated them on what our plan was," said Delozier.

"We can't manage wildlife in a bottle inside the national park. The biggest thing I learned was how important it is to work with our neighbors," said Stiver.

There's another lasting legacy of the red wolf program in the Smokies.  Some people often claim to see coyotes that look a lot like red wolves.

"Every year people will call me and think they saw a red wolf. We know red wolves and coyotes were mating. Could there be some wolf genes out there? It is possible, but probably not likely after 20 years," said Stiver.

Credit: Emma Dufort
A coyote with reddish coloring photographed in Cades Cove in May 2017. Photo by Emma Dufort.

"People see coyotes that have a reddish tint or reddish color.  Those are probably not from lingering genes from the red wolf.  They're probably from feral dogs breeding with coyotes.  When these coyotes breed with feral dogs, they can be solid black, solid red, grey, and a mixture," said Delozier.

Even if any lingering genes exist, they are diluted with every generation and virtually disappear.

The true effort to preserve the genetics of red wolves resides with around 25 wild red wolves in eastern North Carolina as well as the managed wolves at facilities like Zoo Knoxville.

"I think because of the Smokies project, it has brought here a knowledge of red wolves and appreciation of red wolves maybe more than some other places," said Cox.  "Our red wolf pup that was born in 2016, he was just a superstar."

Another litter of eight healthy pups was born at the zoo in 2018.  Some will likely move to other zoos to breed and keep the struggling species alive, and possibly help return the call of the red wolf to the wild.

"I think that's the most important thing for people to know. There are red wolves and they need your help. Because once they're gone. that's the end. And that's a sad day for all of us," said Cox.