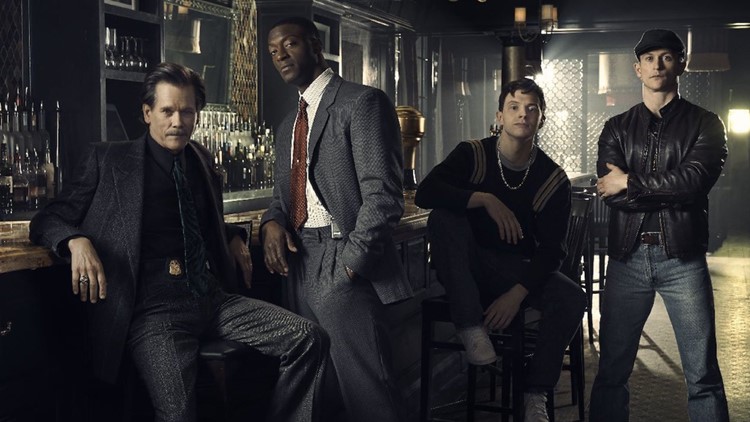 ST. LOUIS - "I treat everyone the same-bad."

Kevin Bacon's Jackie Rohr is that lovely brand of despicable anti-hero that television viewers easily become addicted to. A corrupt yet revered FBI agent who dangles several threads around his nest in Boston, where crime was higher than a kite in the early 1990s before the real life "Boston Miracle" occurred.

Chuck MacLean's Showtime series, 'City on a Hill,' produced by Ben Affleck and Matt Damon, has all the makings of a juicy Sunday night dish. Corrupt badges, courageous crime fighters, ambitious yet jaded attorneys, morally ambiguous bank robbers, and the family members who bend their own definition of good and bad to its destined will.

The entire pendulum swings around Rohr, played with a seductive allure by the wonderfully seasoned Bacon. He doesn't just push this guy in one defiantly audacious direction, instead pushing and pulling his wits and ways with the intent of a jackal carrying a precise vendetta. He sees opportunity and a way back to the light in Aldis Hodge's DeCourcy Ward, one who direly wants to rid the streets of criminal and public official dirt. When a young crew led by Jonathan Tucker's Frank hits a bank and two dead cops are left, a case opens and the show kicks dirt behind its pilot.

While the setup may look familiar -a bent badge and seemingly good lawyer team up to take down the worst-the follow-through is what places it on another level. MacLean and his team of writers and directors don't waste a second of your time in the hour-long episodes, showing you the exotic underbelly of Boston's crime scene and painting the people fighting within it around the outside like a dirty brush marking its own territory. The action isn't common, but it's startling. The drama heightens during the scenes at home with Frank and his wife (the fierce Amanda Clayton) and Rohr's depraved wife (a game Jill Hennessy.)

'City on a Hill' doesn't forget about female firepower, evening the playing field that is usually dominated by males. Along with Clayton and Hennessy, Sarah Shahi shreds the screen as a detective teaming up with Ward and Jere Shea's Hank Signa, while Lauren E. Banks brings the heat as Ward's wife, who has her own plans for the city's health. The multiple layers would normally upend a series with classic genre parts, but MacLean sifts the flavors around evenly, keeping the characters multi-faceted instead of easy-to-spot wooden.

Bacon's work is Emmy worthy. Here's a guy who built a house of sleaze and rents out all the rooms to his many vices. While you've seen him dip into the bad waters in River Wild and Sleepers (also with Tucker), Jackie is something else entirely. This is a role that most actors would chew too deep into, leaving nothing for the viewer to figure out. Bacon instead trades punches with each side of the street here, refusing to walk that straight line that makes you sleep easier on Rohr's intentions.

While his role doesn't carry the same juice as his screen counterpart, Hodge makes good with Ward's strength and desire to do good. You believe in his goals, but wonder if he will end up like Jackie, strung out on vanity. The actor's presence would be enough for a performance, but as the episodes mount, you see new abilities in Hodge.

Tucker has long been one of my favorites, because he's able to inject so many speeds into a character. That trend continues here. Frank does bad things, but he's not an evil person, which leaves Tucker a lot of room to play with. He's got a family life at home, but finds himself drawn back to crime with the help of his troublesome young brother (Mark O'Brien.) Will it get him killed, imprisoned, or somewhere in between? Tucker's talent keeps you invested. Try to not root for the guy with a crackerjack smile.

There's also good turns from Rory Culkin, Kevin Dunn, and James Remar. You can tell the cast was handpicked, placed in roles that fit their strengths. It's the high caliber cast that keeps the show in first class entertainment territory when the story veers off the road for stretches.

The fact that the show is inspired by a true story gives it some extra weight, but in the end, as the episodes fly by, you'll notice that it wasn't really needed. There's enough to entertain the senses and engage the mind here without history staring you down. You'll find yourself wanting Jackie to get ahead, but also rooting on the others to keep him in check. While there are a few story threads being wielded here, it's the tug of war between Rohr's crooked route to justice and DeCourcy's adherence to a straight line that gives the show its backbone.

The show is eight episodes deep with two to go this month. Season 2 is already a go, so jump in while the water is warm. If you want compelling drama with your usual blend of corruption and justice-or if you really just miss Affleck's The Town-check out 'City on a Hill.'

Kevin Bacon's work alone makes it worth the ride.