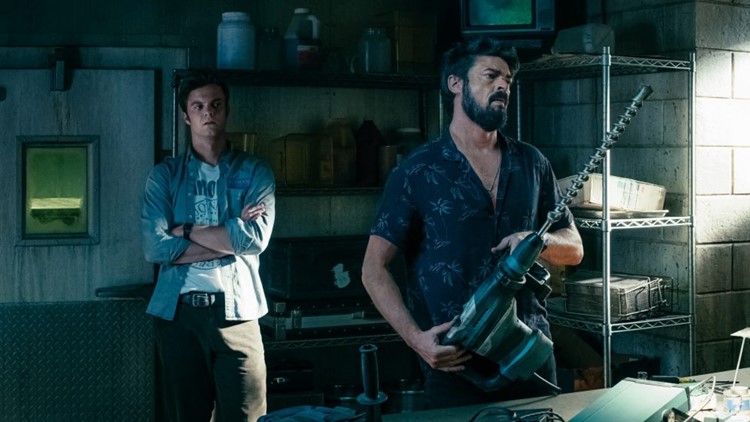 Review | Why Amazon's 'The Boys' is a must-watch television show

ST. LOUIS — In the middle of Eric Kripke's The Boys, a new Amazon television series, a pair of superheroes, Homelander (Antony Starr) and Queen Maeve (Dominique McElligott), storm into a plane with the hopes of stopping a terrorist attack.

They take out the bad guys in the seating area and seem to have extinguished the threat, but when they go to check the cockpit, two more baddies are waiting for them. The tights-wearing pair stop them but destroy the plane's mechanical board and operation in the process. The pilots are dead, and the rescue mission seems doomed.

Now, in 99% of superhero tales, this is where the satisfying yet gratuitous moment would play out. The hero would find some wild way to save the day: lift the plane up and land it himself, fly all the passengers to safety, or something nuts. That doesn't happen here. What does happen is sinister, depressing, and wholly original for this genre. It's jaw-dropping and just unflinchingly different.

That misdirection is the DNA of this entire series, currently streaming on Amazon Prime.

Kripke, along with producers Seth Rogen and Evan Goldberg, circumvent the superhero genre. They take everything that you think you know about how these tales go and turn it on its head. They spin the dial here, creating an addictive and wildly fun ride aboard this superhero satire tale. By going against the grain, they create a satisfying detour down superhero depraved lane.

The Boys centers around The Seven, a group of highly popular -- yet painfully corrupt -- superheroes. Along with the aforementioned Homelander and Maeve, you have a true motley crew of hero tropes drawn up: The Deep (Chace Crawford), A-Train (Jesse T. Usher), Black Noir (Nathan Mitchell), Translucent (Alex Hassell), and the newest member (and most innocent), Starlight (Erin Moriarty).

The Seven are governed by a corporation called Vought International, led by Elizabeth Shue's conniving Madelyn Stillwell. Vought has built a hugely successful branding corporation involving movies, commercials, merchandise, and used social networking to enliven their brand. They are also secretly wielding their powers to fill their own pockets, using human lives as a means to an end, and flying (literally) above the law.

When Hughie (Jack Quaid), loses his girlfriend to a freak accident involving one of "the supes," he enlists the help of Karl Urban's Billy The Butcher to take down the Seven. Others join the vigilante crew, including Laz Alonso's Mother's Milk (yep, that's how they roll here) and Frenchie (Tomer Capon).

If you don't like all the movies and shows where these super-powered individuals go through the regular motions, this is the show for you. The show gleefully zigs when other shows would zag, holding your attention with one unpredictable plot twist after another.

Out of the cast, Starr and Urban stand out, a pair of New Zealand natives working at the top of their game. The former is a true delight here, embodying Homelander (a riff on Superman, all the way down to the laser beam eyes and cape) with a malevolence and dirty wit that you won't see on many Marvel or DC types these days. Here's a guy who was used like a lab rat since he was a kid, born into a world of corrupted morals and overzealous power that yearns for more dollars and soul-eating journeys. Starr was the breakout star of Cinemax's underrated Banshee, and puts in stellar work here. No matter what cruel thing he does, you'll eat up his acting.

Urban, rocking his native tongue, spins a mercurial twist on Butcher's rage. A guy wronged by the Supes, he is bound for revenge but goes about it in unique and highly dangerous ways. He's got all the physical features down: leather coat, bright shirt, old car, dark beard and brooding features. But Urban's crackerjack smile gives Billy something extra. You're not sure if he is too bad for everyone's else's greater good, but somehow, the rooting interest never wavers.

The eight hours aren't a waste, carrying zero filler episodes and always moving the plot forward. If one plotline felt off to me, it was the forced romance between Hughie and Starlight, but that's a minor quip that doesn't upend the show.

A second season has already been greenlit and is shooting at the moment, and I can't wait. Season 1 ends on a wicked cliffhanger that shouldn't enrage you one bit, instead moving you to look back at a few hints to its origin. The Boys is an assured piece of work that gets better with each episode, yet definitely grabs your attention early.

If you like superhero tales, this will enliven you, showing off a different style. If you are tired of the countless attempts to persuade you to watch the same story over and over again, this show stands with you. While 99% of superhero takes keep their mental makeup in the clouds, this riveting series recalls all their human frailties.

Give The Boys a shot. It might just give you a whole new perspective on superheroes and what could happen if powers fell into the wrong hands. I wouldn't watch it on a plane though.

RELATED: Review | 'The Kitchen' is one of the worst movies of the year