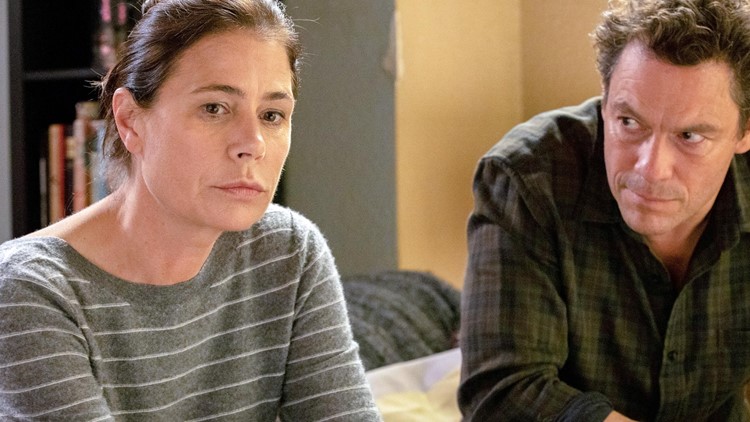 Review | Showtime's 'The Affair' wasn't a perfect show, but it had a perfect ending

ST. LOUIS — "If pain can echo through generations, so can love."

Noah Solloway's (Dominic West) words, spoken in this month's series finale of Showtime's "The Affair," seemed to echo throughout the show's history. Schmaltzy at first, but after you take them in, perfectly fitting like a socket wrench into a stabilizing piece of lumber.

The series, created by Hagai Levy and Sarah Treem, wasn't always the easiest watch-there were unnerving point of view changes that scrambled the focus at times-but it dealt with an uneasy subject matter.

Infidelity, and the long-standing effects it can take on not only one family, but several. The web that such an action can cast out when a single mistake is made out of passion can produce ripples on so many lives. When Noah had the affair with Alison (Ruth Wilson) back in Season 1, the direct parties felt it first.

First and foremost, Noah's wife Helen (Maura Tierney), and Alison's husband Cole (Joshua Jackson). Noah and Helen's four kids didn't just feel the shrapnel burst from that series of mistakes momentarily-they felt it for decades. As viewers, we saw it unfold and digested it as well, finding a way to attach ourselves to it.

The show dug into the complex yet very relatable themes over the course of five seasons. It was the drama always surged against the edge of the story lines, just as the waves pounded the walls off the coast of Montauk, where the heart of the show took place.

Montauk, the heavenly getaway destination that served as the perfect setting for such an emotional ride. It's impossible to see the end of the water that surrounds the coastal village, which can be a potent metaphor for how life can be endless in its judgment.

It was the never-ending judgment that kept the story lines above water when standard-issued drama threatened to take it down. Namely, the Scotty Lockhart (Cole's brother) murder mystery that strung up so many episodes in the first three seasons. Seeing Noah go to jail still seems surreal, but on this show, nothing was truly out of the ordinary. Did I just spoil a big plot point? Sure, but it's much more complicated than a bad boy writer getting convicted of a crime he may or may not have committed.

The show did focus mainly on West's Noah, for better or worse. There were times when I wanted the spotlight to cling closer to Tierney's Helen, or examine the divide between Alison and Cole. Or possibly lurk closer to their four kids-led by the boisterous and outspoken Whitney (Julie Goldani-Telles)-and their detriment from the situation. Then again, Noah was the one who toppled the dominoes in the first season, kickstarting the one show that truly got into the throes of marriage and love, and how those two don't always run hand in hand.

The writing dared to uncover a dirty secret in life, the reason behind such a high divorce rate. The cause for "happily ever after" dying a painful death far too often than not, and the people behind it. Instead of stroking endlessly useless subplots like the Scotty murder mystery, the show planted its feet into the ground over the final two seasons, focusing on its primary characters and bringing their story home.

Sure, the confusing subplots didn't cease to exist. Anna Paquin is a capable actress, but I constantly felt like her grown-up futuristic post-global warming Joanie storyline served as a commercial break for the more interesting happenings taking place in the modern world. But in the end, her story merged beautifully into Noah's, two characters connected by an incident yet separated by time, coming together for some clarity.

The acting made the show great. Without great acting, good drama is futile, a fog hanging over a television without purpose. West is known best for his diligent work on HBO's "The Wire," playing another imperfect yet endearing and good-hearted soul in Detective Jimmy McNulty. But I'd argue his work on Solloway equals or surpasses that performance. It's a tougher assignment. Playing a cop who flirts with corruption and makes bad choices isn't exactly new hat Hollywood; a famous author turning his own troubled life into engrossing, yet poisonous fiction is so much more interesting. West made all of that seem authentic.

And I loved me some Noah drama. It was like watching a boxer take a beating in the ring yet find new ways to remain on his feet. Every time he put out one fire-finalizing the divorce from Helen, moving forward in his career-he would pour gasoline all over something else. It was Noah's actions that served the plot so many delicious entrees to serve up, keeping the audience on their toes.

All of it came to a head with the #MeToo movement in Season 5, where Noah's womanizing ways collided with the release of his novel-turned-movie. He saw nearly his entire family alienate him once again, even as he nudged closer back into their lives.

It's hard to talk about Noah's mishaps without thinking about Helen. Tierney, long known for a series of television and film roles without truly sticking out for one performance, found her calling with this embattled matriarch. Here's a performance that evolved over the years and seasons, finding new shades of purple and red. Tierney can do such with just a twitch of her lips and flash of the eyes, but it was the pain in her dialogue reads that really left a dent. A woman who never truly left her husband, for better or worse.

Wilson and Jackson both grew into their roles, side pieces that became full-fledged people. You were at odds with Alison at first, but once you found out her story and background, there was a different feeling there. Cole, an old school guy, the good guy to Noah's bad boy, couldn't catch a break over the years. Like Helen with Noah, he couldn't resist finding new avenues towards a love and desire for Alison.

Great acting covers up plot holes and storytelling defects. In the final season, there was a subplot involving Alison's former boyfriend, Ben, that could have been something powerful and invigorating, but combined with Paquin's story, grew tedious and fizzled out. I think the writers tried to put a band aid on that and failed. Thankfully, they stuck to the bigger picture, which was Noah and Helen.

The creators really leaned into this main couple with their final two episodes, placing them on top of a wildfire-infused trail to discuss their lives and paths. And again, in the finale, in the afterglow of their daughter's wedding, to find a way back towards each other. Some things take time. Others take lots of time. That should be the motto of The Affair.

That wasn't put to the test more than in a key sequence between a much older Noah and Paquin's grown Joanie. As the series turned the final corner and came to a close, we saw two characters sitting in the same place where the whole series kicked off. Noah, a former best-selling author turned restaurant manager/owner, aka "seafood purgatory" according to Joanie, someone whose job it is to preserve and save the Earth yet more in charge of preserving her memory long enough to ensure her future.

Seeing the two go back and forth about their trials and tribulations was exactly what the show needed, and that tireless subplot required to make sense. Noah using his own painful yet meaningful history to help Joanie make a decision about her life. He reminds her that if abandonment and trauma can stand the test of time, so can presence and joy. It's there that "The Affair" meets up with and embraces its main focus: the way we treat, experience, and learn from loving someone over the course of decades.

The show connected so deeply because we have all been there in some form or another. We have loved, been hurt, experienced pain and loss, and got up off our feet to ask for another dose of the same torture. Torture that helps us define who we are as human beings.

"The Affair" wasn't perfect, but it had a perfect ending. It took the long route to its destination but ended up on a sweet cliff overlooking a lovely body of water-with an old guy dancing because he made it. Like the people it explored, the show didn't always know what it wanted to be, but it rounded into form at long last.

Go see for yourself. The show has ended, now it's just waiting for you.