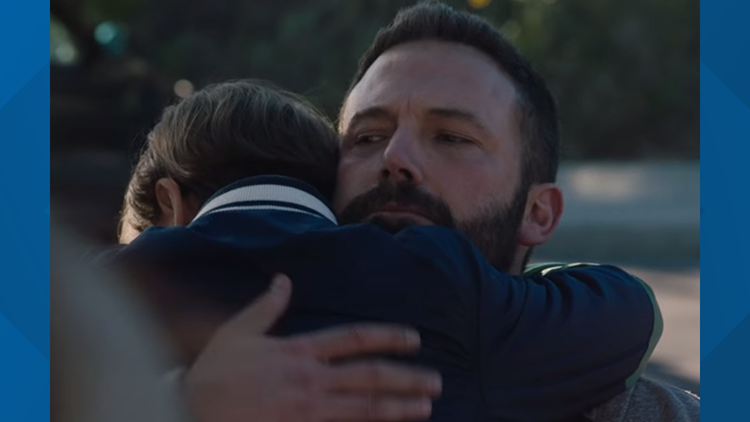 ST. LOUIS — Cinema can be at its finest when the art reflects life.

There's something about seeing an actor take some of his own baggage, throw it up on screen, and find a way to merge onto the make-believe road. The drama is then both real, genuine, and artificial all at once. An emotional response to seeing something put upon, but with real circumstances existing at the roots of its core, thus making the experience authentically powerful.

Ben Affleck has wrestled with the demons of alcoholism for as long back as his career can whisper. He's been in and out of rehab, pledging to get better and fighting the everyday battle of addiction. It'll be a part of his life until he departs this rock, which makes his new movie so much more powerful.

"The Way Back," directed by Gavin O'Connor (who did "The Accountant" with the star), casts Affleck as Jack Cunningham, a man who has spilled way too many gasoline fires in his own life. A former high school basketball phenom, Jack washed out of the sport before he could rise to fame, taking work in construction instead. There's also a tragedy lurking in his past in relationship to his wife and family that could have been caused by his alcohol consumption.

Basically, he's down and out, in need of rescuing. When the head coach of his alma mater's basketball team has a heart attack, Jack is asked to take over the job. One that includes turning a school sports program around, from the basement to the top. One could easily make the connection between Jack's life and this basketball team: two things flat out on the ground in need of serious help.

The rest of the trailer is a real showcase for Affleck, an underrated actor. Everybody knows he can write scripts. The man owns an Oscar for that. Remember, he has written several other scripts while Matt Damon has not, so please lay that myth to rest. Affleck is a renowned director as well, with "Argo" finding Oscar treatment.

But they've always been divided on his acting, something I think off-screen turbulence has contributed to. The marriage to Jennifer Lopez that seeped onscreen into a couple movies, followed by the lovebird romance with Jennifer Garner that ended up having a sad ending as well. On the screen, since his "Gone Baby Gone" resurgence, Affleck has taken on a lot of great roles, both supporting and lead.

People blur the line, just like Affleck can on occasion. Just like he is doing here with "The Way Back." Working with O'Connor gave the actor his last great leading role with the 2016 film about an autistic hitman. There was something about the mixture of action, drama, and adventure that made that film stick its landing. Affleck, in full movie star mode, gave a commanding performance.

Here, O'Connor gets back to his "Warrior" roots, carving out a sports story infused by human trauma. A game acting as a healing device for the wounded and wicked. That's cinematic popcorn for the soul, and medicine for Affleck.

In truth, I've always been a big fan of his. I love his combination of charm, versatility, and man-of-action ability. He's produced some bad films, but what actor hasn't? Daniel Day Lewis did "Nine," and Christian Bale did "Terminator Salvation." Affleck is someone who is easy to root for. Maybe it's his desire to avoid the robotic nature of the Hollywood game, or it could be due to his flaws that rarely leave his screen work. Either way, he's a good presence to see tackle a juicy role.

And Jack Cunningham is a juicy role. One that challenges the actor both personally and professionally. While the film doesn't scream Oscar to me at first, there is some room for surprise in that regard. You don't see many sports films rallying for Best Picture, but maybe "The Way Back" can change the mold.

One thing is for sure. Affleck took this role for a reason, and that's always a good thing. This is a low budget go-for-broke type movie and role, so there's genuine intrigue there. Maybe he's trying to show us what one can deal with whilst in the world of fame and addiction.

We shall see. "The Way Back" comes out on March 6.