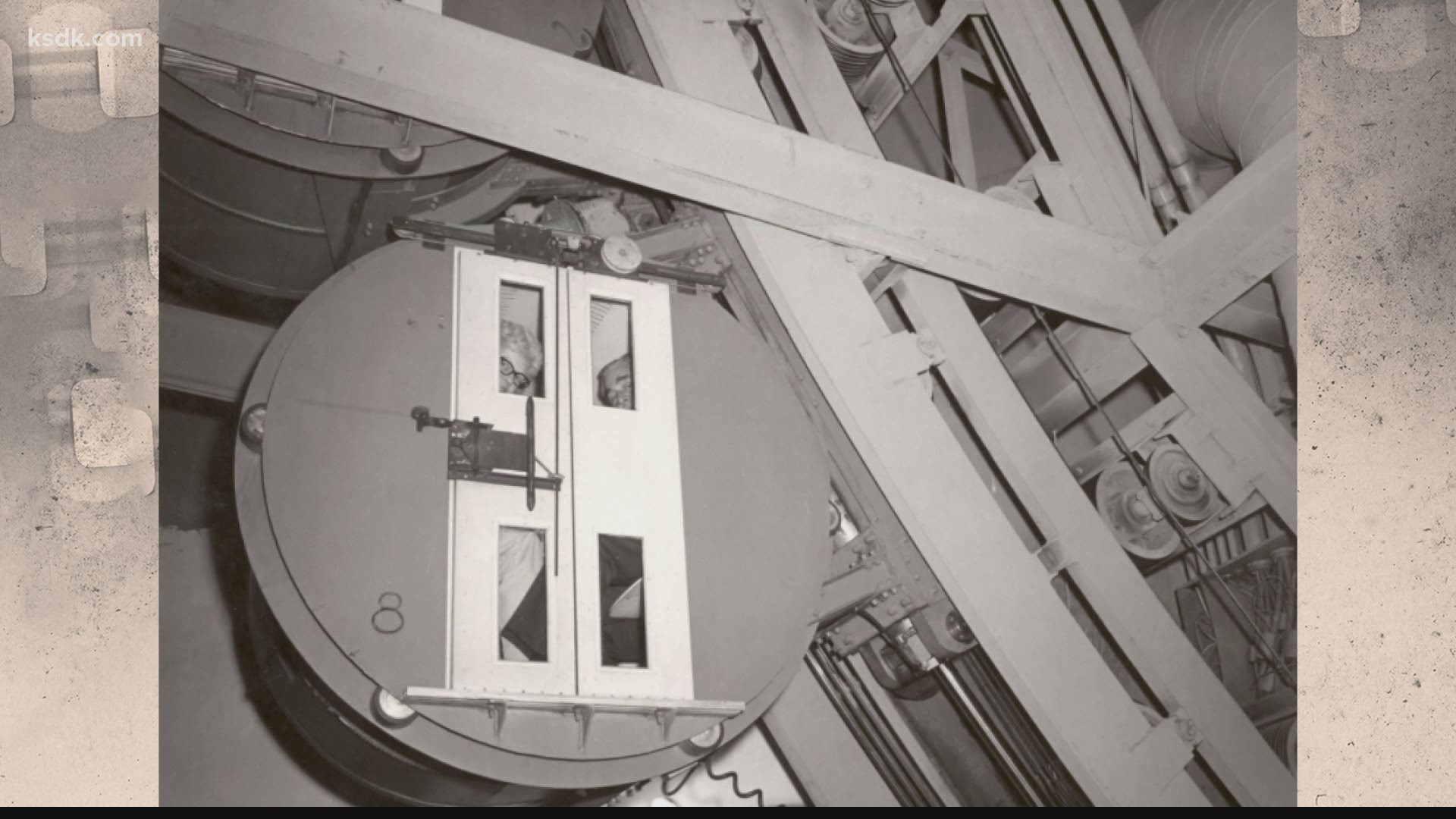 ST. LOUIS — Fifty-five years ago on Oct. 28, construction of the Gateway Arch was completed.

5 On Your Side has been celebrating all month long with a look back at the planning and building of our city's icon.

Wednesday's Vintage KSDK digs deep into our video archives for the highs and lows of what would become one of our country's most-visited monuments.

For two years and eight months, the Arch had people looking "up" in this town. High above the Riverfront, our reporter climbed new heights and interviewed the construction workers to get the big story.

"We sort of expected a rather hazardous operation this morning but everything went smoothly? Was that as you expected?” our reporter asked a construction worker on a platform high above a leg of the Arch. “Everything went very well this morning, just as we'd planned."

Big crowds came out on the day the last chunk of the Arch was dropped into place.

But while so much of the work could be seen from the outside, there were even bigger problems to solve on the inside. Like, how to get visitors to the top.

"And it was a real engineering problem,” said Bob Moore, a  historian for the National Park Service. “They contacted big elevator companies who declined. They didn't want to have any part of it. And then they happen to call one elevator company where there was a guy who was just had stopped off to see a friend, and his name was Dick Bowser."

Bowser's father worked for an elevator company and in two weeks, Dick ended up literally designing the trams in his basement.

Capsules weighing 1,040 pounds, that hang from a track and rotate along the curve inside the legs, carrying people to the top. Another feat of engineering, not without hiccups.

"Well there was a problem with the transporters or capsules would stop about halfway up? That's been corrected?” asked our Channel Five reporter of a project supervisor. “Yes, one of the problems in any new system is working out the bug involved."

While huge crowds would eventually turn out for a trip to the top, ticket holders wouldn't get that ride until July 24, 1967, almost two years after the Arch was completed.

Riders waited in line for hours.

In fact, the entire future of the Arch as an attraction had been in question since its completion.

It wasn't until the Bi-State Development Agency floated a $3 million bail-out that the trips to the top would get going.

Even the dedication ceremony wouldn't go as planned. Held 10 months after the tram rides started, a heavy rain forced the crowds into the concourse under the Arch. On hand, Vice President Hubert Humphrey and dozens of local dignitaries.

A plaque was dedicated, and the people haven't stopped coming ever since.

"I think the Arch itself is just so timeless, the appearance of the Arch,” says Moore. “It just doesn't age. It doesn't say, this was dreamed up in 1948, or this was built in 1965. It's just an amazing structure."

An everlasting tribute to the men and women who took an architect's idea on paper and brought it to life on the banks of the Mississippi river.

"I've been able to interview a lot of the people who actually built it,” says Moore. “There's so many stories that they tell,  and it's just an amazing group of guys, amazing generation of people who were able to get up on that thing."

They did it swaying in wind and snow, bitter cold, and St. Louis summer heat. Harsh conditions that wouldn't stop a dream set in motion in 1947, and finally completed on Oct. 28, 1955.

Architect Eero Saarinen didn't live the see the completion of his masterpiece.

He didn't even live to see construction begin on February 12, 1963.

Saarinen died on Sept. 1,1962, while undergoing an operation for a brain tumor.

But his memory lives on, right here on the banks of the mighty Mississippi.

RELATED: Vintage KSDK: Operation Challenge and the Kinloch Riots of 1962