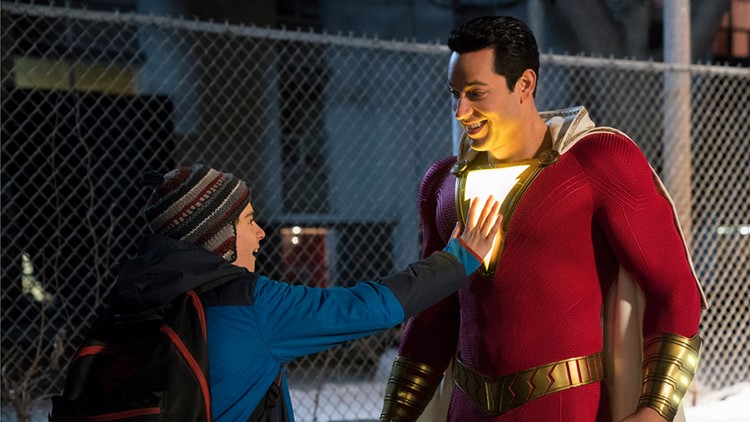 Why 'Shazam!' is a refreshingly tongue-in-cheek comic book adaptation

What if you could turn into a superhero by saying one word?

For Billy Batson (Asher Angel), life has been anything but easy.

Orphaned at a state fair by his mother when he was very young and currently finding himself on the wrong side of the law, Billy finds himself face to face with a Wizard (Djimou Hounsou) in a secret lair one evening. If he is pure of heart, The Wizard will grant him enormous and seemingly limitless powers that turn him from a 14-year-old kid into a larger-than-life superhero (Zachary Levi).

Welcome to David F. Sandberg's new film, the latest DC entry, "Shazam!" A rollicking good time at the movies that never gets too heavy or slows down long enough for a viewer to examine its silliness. This is easily the lightest of the DC offerings in recent years, presenting a story that pulls elements from "Big", "Superman", "Goonies", and a few other classics that aren't finished rattling around my head. Be prepared to laugh a lot, because this superhero is one gigantic kid.

Levi is perfectly suited for the role. If you had told me he was going to play a DC hero ten years ago, I would have laughed at you and asked if your Slurpee was spiked. You may know the actor from NBC's "Chuck", so just imagine if he's been working out since that show went off the air, and you have this character. Muscled up yet giggly and never getting too stern or brooding endlessly, Levi really connects as the super-powered Billy. If someone couldn't perfect humor like Levi, the role — and subsequently, the film — would have sunk like a ship.

Mark Strong gets to put on his usual villain hat here as the up-to-no-good Dr. Thaddeus Sivana, who once upon a time had an encounter with the Wizard that didn't go that well. Strong has played over a dozen villains in his career, so he finds a way to push some personality and charisma into a thinly written role. Sandberg's film finds a few comedic ways to lighten even the darkness of the bad guy.

Among the other supporting roles, Jack Dylan Grazer stands out, playing Billy's unlikely friend, Freddy Freeman. This kid is a real find. When Billy is arrested by the police, he ends up in a friendly group home for abandoned orphans, and the comic book-obsessed Freddy immediately takes Billy under his wing. It's the scenes with Grazer and Levi that sit atop the rest in this movie. From saving gas stations to being grilled for nearly causing a train collapse, Freddy and Super Lightning Fingers (there are many nicknames for Levi's hero, and I just made that one up) create the most laughs together.

Yes, there is a big climactic superhero-villain battle, but it's not tiresome. Sandberg has some fun with it, especially in a scene where Thaddeus is shouting villainous plans, but Shazam can't hear him. Whenever there is a chance for humor, the filmmaker goes for it, which balances well with the rather frightening demons that the evil doctor summons during his battles. The final showdown isn't overlong, which is a pleasant change of pace from EVERY previous DC film, including "Wonder Woman".

The action scenes channel-while simultaneously parodying-the ridiculous and overlong climatic battles in "Batman Vs. Superman" and "Man of Steel", right down to the way the characters punch and zip through the air in a burst. Luckily, a hundred buildings aren't destroyed in the big fight, just one unfortunately placed Ferris Wheel.

No, you don't have to read up on "Shazam" before seeing this film. I went in completely blind, and really enjoyed it. You won't get all the Easter eggs or references, but that's what fellow critics like We Are Movie Geeks' James Batts and the esteemed Max Foizey are for. You watch the film like a comic book virgin, and then bother the comic nerds afterward for answers. If you don't know anything, the experience is more than likely better and hits you easily. There are some small goodies packed into the film, especially a few late cameos from the likes of Meagan Good and Adam Brody. Sandberg's horror film background shows up in a key early scene as well as a couple others, offering comic book fans a well-deserved jolt.

The film isn't perfect. There are a few scenes that just linger on and could have been cut, which would have brought the running time under two hours. At times, the silliness can swell up and take away from the main plot of the film. The action is slick and entertaining at times, but eventually, you've seen it all and can predict who is getting punched next. "Shazam!" falls into the common tropes of a superhero film, but luckily, doesn't stay marred in them for too long.

The Big reference is well-placed, and the film's ability to stay light on its feet is a refreshing course for the DCEU, which often feels clogged up, stuffed with too many characters and drama, or just wears you out. "Shazam!" never gets too heavy, and that's a big strength.

Here's the thing. It's not as good as "Wonder Woman", which is something you'll hear often with DCEU films, because of how precise and full-bodied Patty Jenkins' film was and still is. But I did like "Shazam!" more than "Aquaman", which went on for too long and felt stuffy by the end.

There's a sly yet never preachy stance on orphans and how coming together can help heal the wounds of an unprovoked childhood. Real life orphans who walk in blind to this film will respect the care that Henry Gayden showed with the sad epidemic in this country, and appreciate that this story spins off the fact that an orphan finds superpowers. It's a well-earned feel-good touch.

Speaking of Gayden's work here, I liked the fact that Shazam doesn't become completely good when he finds out he can fly, has super strength, or can zip from one spot to the next. There's a growing pains transition that isn't rushed nor does it come off too fake. "Shazam!" is a confident piece of work.

With its tongue planted firmly in its cheek, "Shazam!" makes for a refreshing time at the movies.