Bernie Sanders is popping up all over the St. Louis area

Several spots in St. Louis have joined in on the Sanders Inauguration Day meme fun 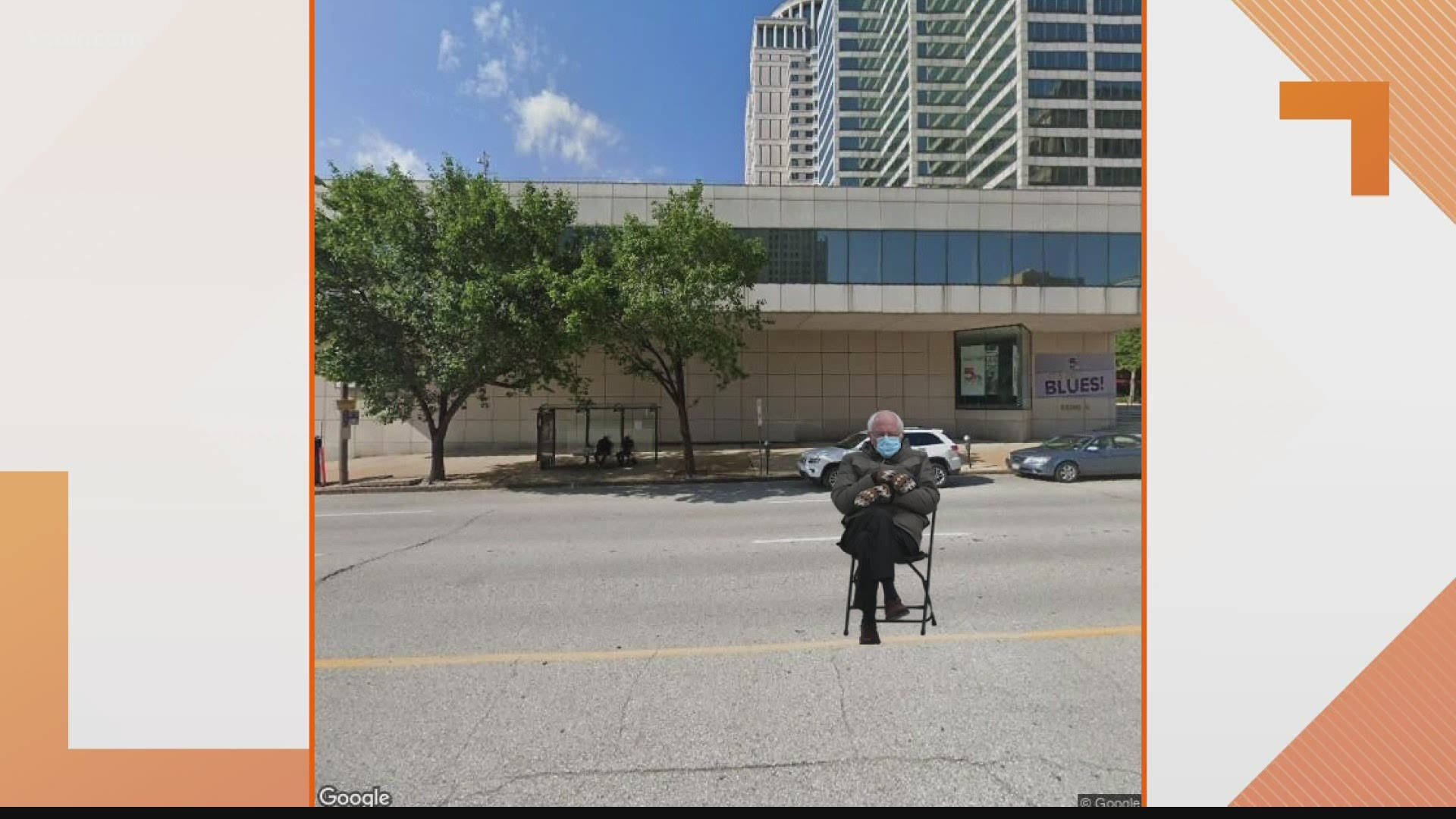 ST. LOUIS — U.S. Senator Bernie Sanders has been popping up all over the place since he attended President Joe Biden’s inauguration, including right here in the Lou.

A photo was captured of Sanders sitting at the inauguration with his arms and legs crossed, wearing a coat and gloves. The image was quickly turned into a meme, with people placing Sanders in a variety of places.

Several spots in St. Louis have also joined in on the fun…

One of the first local memes to hit social media was from the St. Louis Blues. The team posted a photo on Twitter of Sanders sitting all alone in the stands at Enterprise Center.

RELATED: Bernie Sanders wears mittens made by Vermont teacher to the inauguration

A handful of local restaurants started jumping on the bandwagon...

Mission Taco Joint put Sanders in front of its restaurant with the caption, “When it’s going to be 50 degrees and you’re waiting for your friends to get off work for tacos and margaritas.”

La Patisserie Chouquette put Bernie in front of its door and said he knows the importance of ordering early.

Salt + Smoke also posted Sanders sitting outside its restaurant with the caption, "Waiting for Salt + Smoke to open up for the day like..."

Diego's Cantina posted a different photo of Sanders on his phone at the inauguration with the caption, "Sure, we’ll be right out with your order."

And Frida’s St. Louis put Sanders between two tables with the caption, “We’ll be right with you, sir.”

St. Louis Bicycle Works put Sanders in front of its building with the caption, “Got some extra help today with keeping our curbside pickup area clear."

Camp Mill Pond, a St. Charles summer camp, posted a photo of Sanders sitting outside on a sunny day with the caption, "Had to. Those mittens, tho. Truly a campers dadcore fashion staple."

Amie Dupre’ Corley, a local interior designer, put Sanders in a colorful living room with the caption, “Couldn’t pass this up. #bernie thanks for the inspo.”

The Saint Louis University Billikens posted a photo of Sanders sitting outside Chaifetz Arena with the caption, “Waiting for Billiken basketball to return on Tuesday like...”

Waiting for Billiken basketball to return on Tuesday like... pic.twitter.com/ihNmdbjKrH

Webster University put Sanders in a few spots around campus with the caption, "Wherever you are hanging out on campus, make sure to bundle up and wear a mask!"

Wherever you are hanging out on campus, make sure to bundle up and wear a mask! pic.twitter.com/C1Y2N0lgJU

Hollywood Casino St. Louis also used it as an opportunity to remind visitors to wear masks.

The meme has been so popular since the inauguration that an NYU graduate student set up a website with one goal: to let people take the now iconic image of Sanders and put it anywhere. The website taps into Google Maps. All you have to do is enter an address and Sanders will be sitting anywhere you want.

You can create your own Sanders meme on the website here.