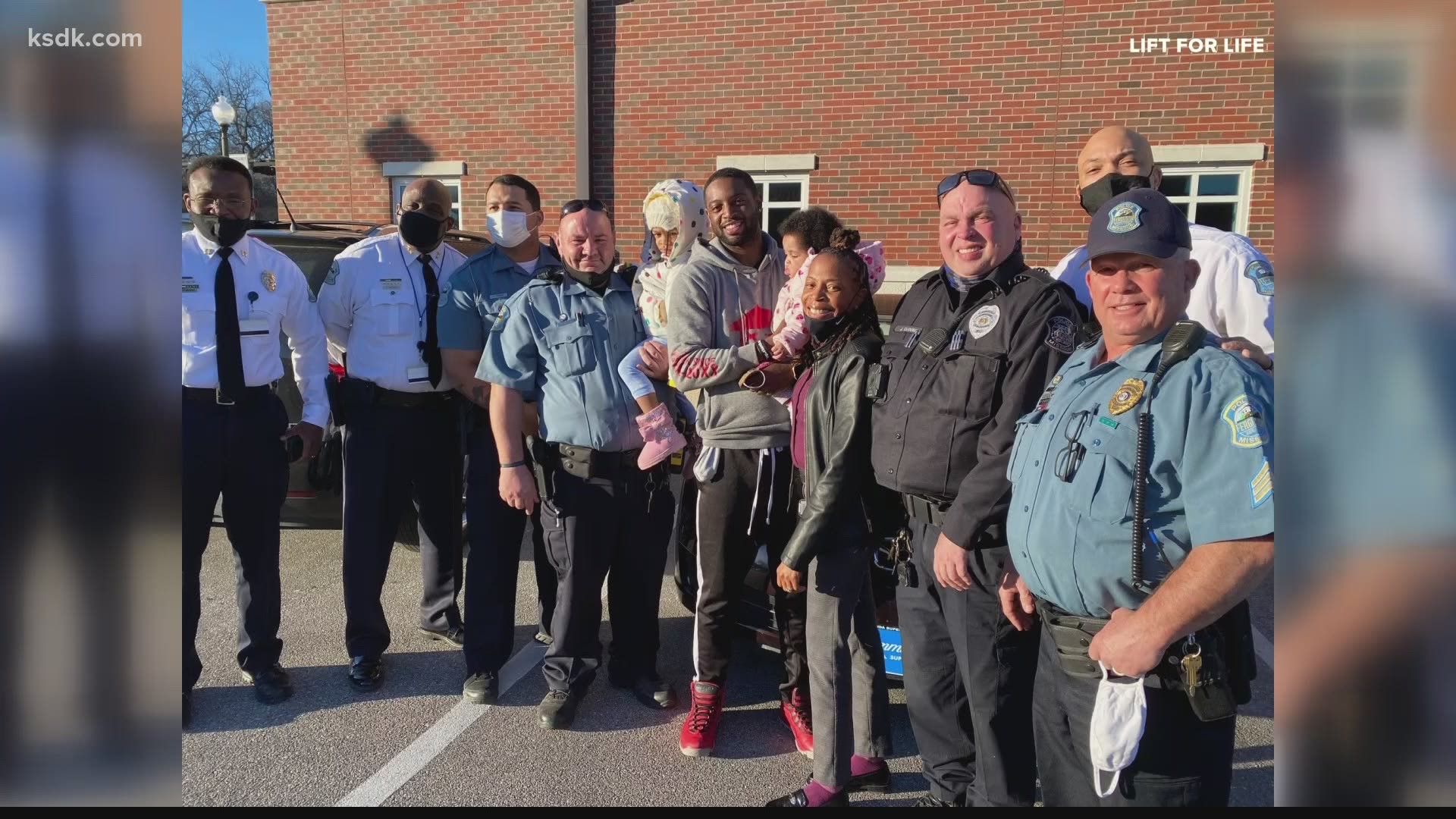 But it was all just a ruse to lure him into a moment — and a reward — to commemorate one of his acts of bravery.

“It was just perfect timing, honestly,” Knighten said. “I was so overwhelmed with emotions because I wasn’t expecting it at all.”

Knighten, 25, remembers being at police headquarters in December 2019 filing some paperwork when he overheard a dispatcher talking to a 911 caller.

He heard the dispatcher repeat the caller’s words, saying a boy had fallen into an icy pool at the January-Wabash Park.

It was about five minutes away from the station.

He ran to his police car and rushed to the scene, lights and sirens blazing.

He scaled a six-foot fence, which 10-year-old Cartel Walker had squeezed under to get to the snow-covered diving board. He slipped and fell into icy stormwater that had collected in the deep end of the pool.

“The water didn’t appear to be as deep as it actually was,” said Knighten, who is 6-foot-2. “The ice broke and I fell into the water and I didn’t touch the bottom.”

The frigid water soaked into his uniform.

“It was just pulling me down,” he recalled.

The cold shocked his muscles, catching the Navy veteran by surprise despite the aquatic training in his background.

“I had never swam in water that low of temperature so I had no idea the shock that it would put on muscles,” he said.

But he made it to Cartel.

“I ended up grabbing a hold of him and tried to get as close to the edge of the pool as I could,” he said.

But he knew he couldn’t swim back to the shallow end of the pool, so he grabbed onto a step that was a couple of feet above the surface of the deep end.

“As I’m holding on, I could feel my glove my hand slipping out of my glove and, at one point, I’m thinking, ‘I don’t know if I’m going to make it out of this one,’” Knighten said.

“He jumped down into the water and held onto the step for me and I held onto him until fire came through with a rope,” he said. “I don’t even know where I got this like strength from, but I was able to lift the boy up with my hand.”

Firefighters then pulled Cartel and the officers out of the water.

“I remember being so cold, they laid me on the snow and I didn’t even realize that it was snow,” Knighten said.

Knighten was taken to the hospital as a precaution. His fellow officers told him he was going in and out of consciousness.

The only thing Knighten said he could think about was Cartel.

But Cartel didn’t make it.

“That was probably the, like, the hardest news that I had to accept,” Knighten said, holding back tears.

In the days and weeks that followed, Knighten relived the moment, relentlessly second-guessing himself.

What if he could have got there a second faster?

What if he would have removed some of his police gear before going in?

“I was really beating myself up about the situation,” he said.

But his fellow Ferguson officers helped him find mental health services and surrounded him with support.

So did his alma mater, Lift for Life Academy. It’s a nonprofit school on St. Louis’ south side.

Kelter said she’s been one of Knighten’s biggest fans ever since she met him as a student, admiring him for overcoming some trying circumstances in his life.

In 2015, he got shot by the jealous ex-boyfriend of a woman he was bringing home from their first date.

Knighten said the man sped toward him, and Knighten’s tires screeched as he tried to get out of the way.

When he got out of his car, the man told Knighten he had disrespected the neighborhood by screeching the tires.

Knighten, who was 19 at the time, went inside his date’s house to meet her parents and told them he worried the man might vandalize his car. They told him to park it in their garage, but when he went outside, the man was walking toward him along with two other men. All of them had guns.

The man who attacked them is now in prison. And Knighten is now a police officer.

“Jamez has been shot, he's been a victim of violent crime himself, and instead of turning angry and bitter, which he rightfully could have done, here, this young man got a great foundation from his parents, a great foundation at Lift for Life Academy, from the Navy, from the police department and that's the direction he went in,” Kelter said. “Instead of going left, he went right.”

In recent weeks, Knighten had been talking with Kelter about his financial situation.

He has two daughters, Serenity, 2, and Lyric, 7 months old.

The car he bought at an auction wasn’t holding up for them.

“Here is this police officer Ubering to go to work every day,” Kelter said. “I wanted to do something to help him because he would have never asked.”

So the wheels started spinning in Kelter’s head.

She called a supporter of Lift for Life Academy for advice.

Instead of advice, that supporter bought Knighten a car.

Another nonprofit, Connections to Success, helped the donor give the car to Knighten and also gave Knighten a Community Hero Award.

Kelter lured Knighten to the police department for the big surprise by telling him he was going to meet with a financial advisor.

Instead, Kelter, some of Knighten’s family members and fellow Ferguson officers were there waiting to surprise him with the award and a 2011 Mazda 6.

The moment happened nearly one year to the day Knighten risked his life to try to save another.

“He never wanted to be really recognized for this act of heroism and valor, because he felt like it was it was a horrible situation and a child lost their life,” Kelter said. “Although the outcome that we all would have wanted didn't occur, you can't take away from a young man scaling a fence with all of his police uniform on him, jumping in the water to save this child.

“That's a remarkable feat, and, in a split second, his life was changed forever. And he has to live with that.”

Kelter said the anonymous donor was in the crowd, watching Knighten get the award and the car.

“When a person steps up and does the right thing when no one's looking, that does need to be recognized,” Kelter said. “I’m just joyful this quiet superhero was recognized for his efforts.”

He said he thought of his own little brother when he saw Cartel in the water because they were close in age at the time.

“I would want someone to try their hardest, try their best to save my brother if he was in that situation,” he said.

Knighten has met members of Cartel’s family since the drowning, bumping into Cartel’s grandfather while on duty inside a store.

And Cartel’s father is friends with him on Facebook, too.

The child’s family has thanked Knighten for trying to save Cartel, telling him his actions gave them precious time to say their goodbyes at the hospital.

That’s the reward that Knighten said has meant the most to him. 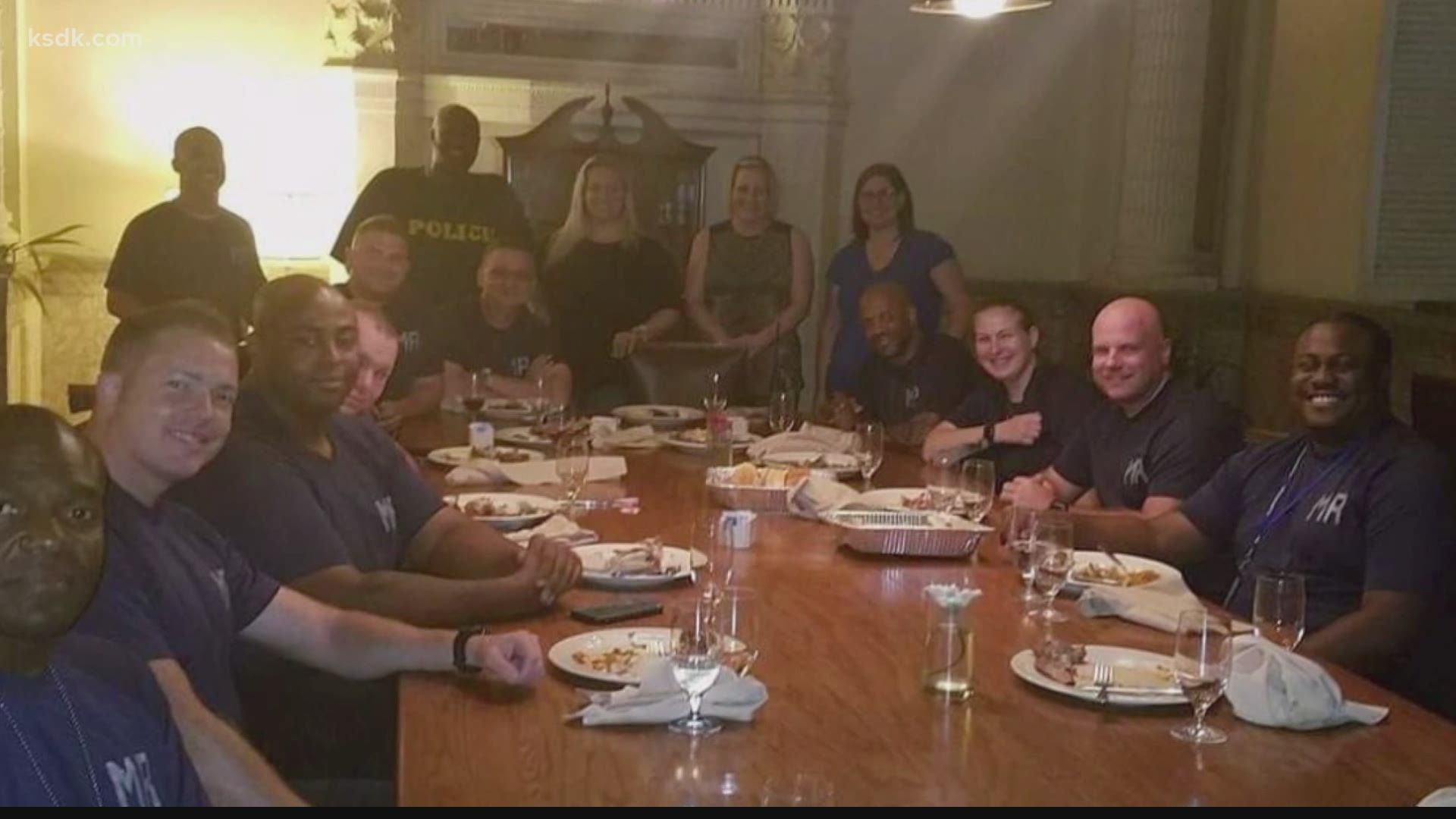