Freedom Flops: Why a pair of sandals made in Dallas are actually a really big deal

Marine veteran and amputee Jacob Schick explains why a simple pair of flip flops, now offered free to veterans just like him, is a bigger deal than you might think. 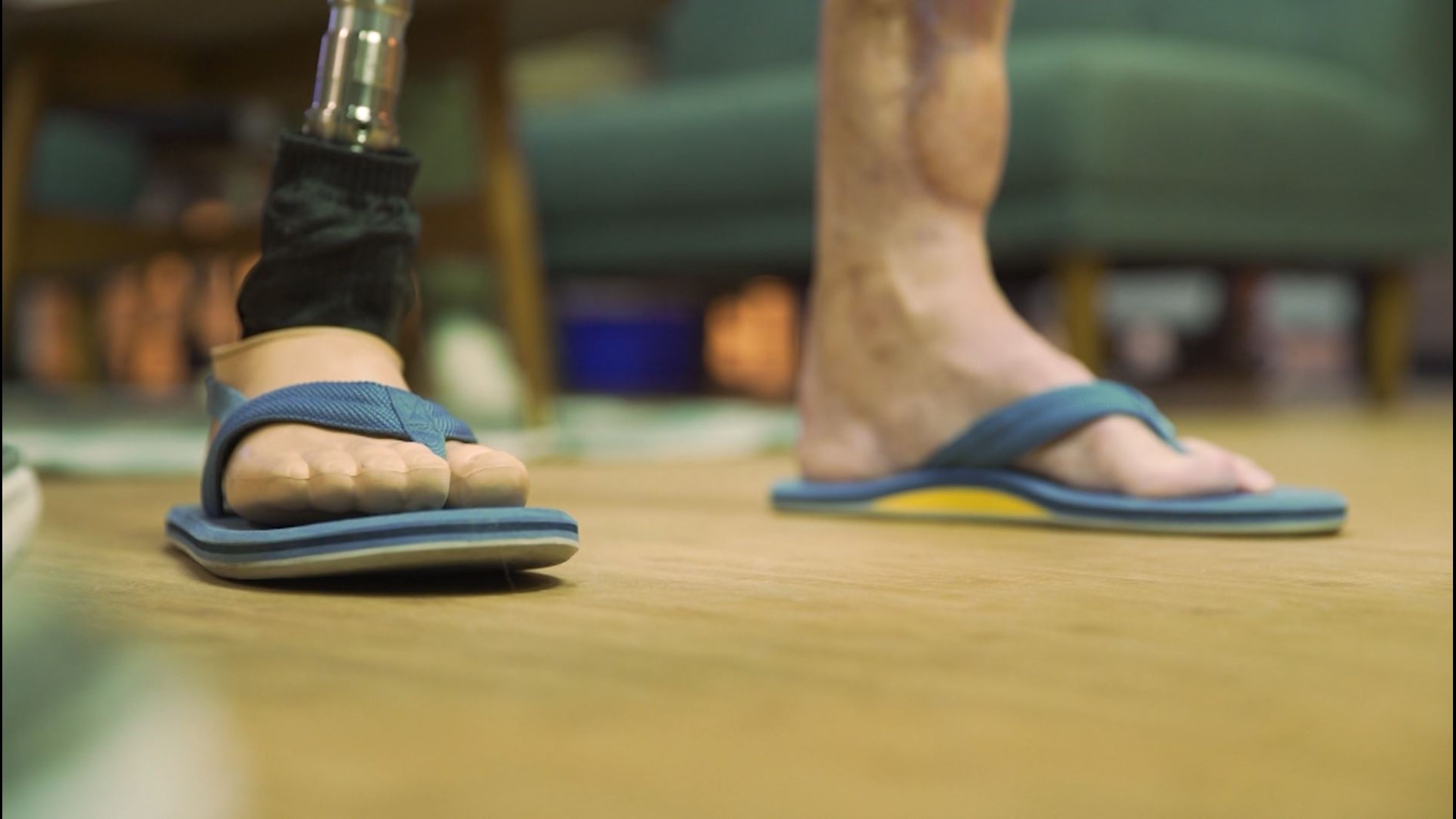 DALLAS — You might not think of a sandal, a flip flop, as a symbol of freedom. But a Marine veteran would tell you otherwise. And a Dallas company is betting there are more just like him ready to get a sample of that freedom, for free.

The announcement happened at a Deep Ellum-area company called Hari Mari just a few days ago. An idea that started with Jacob Schick.

"All we wore was boots and sandals. Nothing in between," the Marine veteran said of his time before 2004 in Iraq.

That's the year a triple-stack tank mine changed his life forever. The explosion ripped through his Humvee.

Forty-six surgeries and 23 blood transfusions later he recovered from extensive injuries including broken bones, severe burns, and the loss of his lower right leg.

He jokingly refers to the life-changing incident as "a bad day at the office."

In the years that followed, Schick has done very big things. He is the CEO of 22Kill, the veteran suicide-prevention organization in Dallas. He's traveled the world as a spokesman and advocate for veteran-related issues.

Schick has even been in a movie or two: most recently A Star is Born with Lady Gaga and Bradley Cooper.

There are seemingly small things he's worked on too. He liked sandals, flip flops, but nobody made one that would stay on his prosthetic foot.

"Much, much older cousin," Schick laughed.

"We didn't know if it was even going to work," Stewart said of the prototype they agreed to make and have Schick perform his own rigorous Marine-level tests.

And the flip flop, with a strap around the heal to keep it affixed to a prosthetic foot, did work.

It worked so well that Hari Mari announced it was ready to provide the same free set of flip flops to any veteran or first responder amputee injured in the line of duty.

"It became a very small way for us to hopefully give back," Stewart said on the night the announcement was made.

"Trust me when I tell you it's not a small thing. It's not," Schick replied. "They do give you a sense of freedom that you otherwise didn't have before. And so it's not as small as Jeremy puts off."

"It's a big deal because it's a lot more than saying thank you. It's showing it. A thank you is easy. It's lip service. They are following through with a tangible action that's changing lives for the better," Schick said.

"These guys do more for us than we all ever know, right," said Stewart. "And to be able to kind of pay that forward, to reciprocate in some fashion, is a huge deal."

When you get right down to it, it's just a sandal. A flip flop. But these are called Freedom Flops for a very good reason.

"To be provided that freedom again is a big deal," said Schick.

A big deal, with a few more small steps toward freedom, for the men and women fighting for ours.