They ditched apartment living, moved into a van and haven't looked back 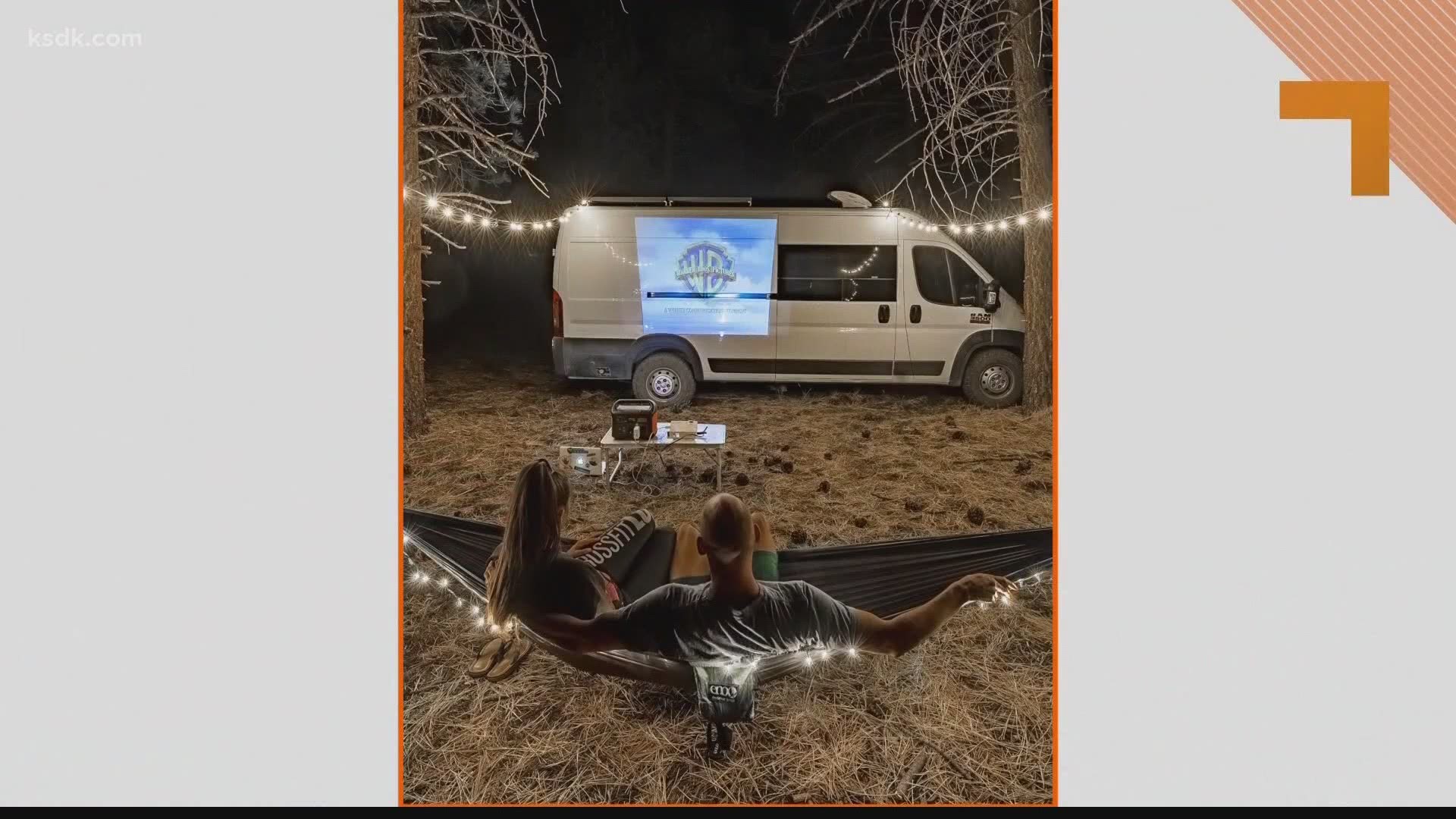 Someone who traded their house or apartment for a home on wheels, minimal possessions and the open road.

Van life is becoming increasingly popular with millennials, and people are becoming more open to the idea amid the COVID-19 pandemic.

Fenton natives Lindsey Graham and Danny Rekart jumped on the bandwagon in 2018. They ditched apartment living, moved into a van and haven't looked back.

The couple has been documenting their journey on Instagram and have gained more than 20,000 followers along the way.

'The risk was worth it'

In 2016, the couple left Missouri when Rekart became a traveling nurse – a nurse who aids hospitals when they are short staffed for short periods of time.

They realized they were getting killed in apartment and moving costs while living in expensive cities like Los Angeles, Denver and Seattle.

Graham said at one point they paid for four months of rent and weren’t even in the apartment – they were out traveling hours away from home.

The couple started thinking about having a home on wheels after seeing family members move into an RV and take a year to travel.

“Their travels were inspiring, and we knew that this could be the answer to some of our problems if we went nomadic,” Graham said. “We could easily combine our two worlds – adventure time and home life – in one fell swoop.”

In September 2018, they bought their van.

Graham said they were clueless on how to build it out, but they found a good deal and jumped right in. The following month they moved out of their apartment and into the van, before it was made into a livable space.

At that time, it had no insulation, running water, cook set, toilet or heat. She said they lived there for about five weeks in the dead of winter in Seattle and ended up saving more than $3,000.

"We also gained the confidence that vanlife was for us," she said.

From January-April 2019, the couple came home to Fenton to build the van. Graham said Rekart had never done anything like this before but learned how by watching YouTube videos.

She said since they jumped into van life, they didn't have much money saved up and had to put expenses on credit cards.

"The risk was worth it, but we also lived broke for a while till they were paid off," she said.

After months of work, the van was made into a livable space that runs on solar energy, has a stove and oven, a faucet that runs cold and hot water and an environmentally friendly toilet.

In May 2019 they were off to their first assignment in Salem, Oregon, with a new lifestyle. Graham said it came with both heartaches and moments of “elated joy.”

Watch a brief tour of their van in the video below:

When you're living a nomadic lifestyle, each day brings something different.

As a nurse, Rekart works six 12-hour days in a row, then has eight days off. That’s when the couple decides where they want to travel.

Graham said sometimes it’s an ocean, the mountains or the desert – it’s just whatever they are feeling at the time.

“We like to diversify our time and really be mindful to spend our time in places that bring us the most joy but still allowing new experiences to be abundant,” she explained.

During Rekart’s workdays, Graham runs their social media front, creates content and does housework. She also spends time “resetting” the van, so they have everything they need before those eight days off.

One of the best things about nomadic living is the ability to move around with ease, especially with the travel nursing lifestyle. Once their contract is over, they can leave that same night if they want to.

“Not one box has to be packed and not a thought has to be made on the transition from one spot to another,” Graham said.

Their home is where they park it. If there is a path to it, they can temporarily call it home. Then, it's off to the next place.

“I literally have a cabin in the woods, a house on a cliff outlooking to a mountain, a beach front property, and a lake house,” she said. “I have lived in some of the prettiest places that if you haven’t seen it with your own eyes, you would never believe it was real.”

Graham said their lifestyle has given her a new mindset on life and that every moment is an opportunity to grow and become a better version of yourself.

“I cherish each moment like it’s my last. I ride this crazy roller coaster with both hands up and just allow it to take me for the ride.”

Another huge benefit of the nomad life is financial freedom. The couple is in their early 30s and they are completely debt free. They don't pay rent or utilities besides filling their gas tank and filling their propane tank, for heat and the stove, every few months.

Graham said they also save money by being “avid minimalists.” They don’t spend money on anything they don’t need. Most of their spending goes toward food and experiences.

She now thrives on the simple life.

"I find joy in the smallest of things like a hot shower because they aren’t a guarantee right now," she explained. "I cherish every sunset and every opportunity I have to explore one step further in this world."

And as a COVID-19 nurse, one of the greatest benefits for Rekart is time. While he's working, they can park their van in a parking lot behind the hospital.

"I don't have a commute," he said. "A lot of people are waking up an hour or two hours before work so that's a huge benefit."

"There's a lot of benefits to this that we didn't even know would exist," he explained. "You buy yourself so much time when you live small like this and you don't have to drive back and forth."

Photos: St. Louis couple living on the road in van

Although living nomadic has many benefits, there are also some challenges that come with it.

Graham talked about how being able to move around so easily has led to some amazing experiences, but this can also be a drawback.

“It definitely can be stressful in the beginning, but it just comes with the territory,” she said.

This leads to another challenge – vulnerability. One of the biggest fears that comes with living on the road is a break-in or your home on wheels getting stolen.

Most people living on the road have everything they own in their vehicle. Graham said everything in their van is covered by insurance but one thing they can’t replace is their cat, Mogley.

“If someone was to smash the window, Mogley would without a doubt jump out because he is curious and not be able to get back in,” she said.

When talking about challenges, Graham said they are like modern day pioneers. If they need something, they must go find it themselves – nothing is handed to them.

When they run out of water, they have to go find it. When the sun doesn’t come out for days, they have to be mindful about how they use their energy.

“You are always in a state of not knowing where you are since you are constantly moving from one place to the next. Life on the road is hard work,” she explained. “Pretty much, we are pioneers with some modern-day perks, like grocery stores.”

When you live in a 70-square-foot space, you don’t get much privacy, but Graham said it's sort of a double-edged sword.

“It has definitely made Danny and I completely in sync with each other and we can literally read each other’s minds at this point, but sometimes, you just want your space,” she said.

Although living on the road could be a benefit amid the COVID-19 pandemic, it's also a challenge in some ways. When it comes to showers, it’s been tough.

Most 24-hour businesses are no longer open 24 hours, some businesses have closed off their bathrooms to the public and several gyms have temporarily closed their doors.

Before the coronavirus pandemic, the couple relied on 24-hour access to a gym for a hot shower. Thankfully, Rekart can shower at work but Graham needed to find an alternative.

She said she has showered at truck stops or uses her sink to get clean.

'No end in sight'

As far as what the future holds for this couple, Graham said there is no end in sight, but nothing is ever set in stone.

“We will continue to travel and call the open road home until it doesn’t feel right,” she said. “Although, I honestly don’t see us ever stopping. We know too much now.”

Not knowing what will happen down the road is just part of the nomadic mindset.

"You just follow this road, you go with the wind and allow life to unfold before you and make the best decisions you can," she explained.

Rekart said now that he has lived the van life, he's turned off by the idea of living in a bigger home and Graham said they’ve talked about going even smaller.

"The smaller you are, the more move-ability you have, and the more spots you can easily fit in," she said.

In the short term, the couple has plans to come home to Fenton in December for the holidays.