"From her attitude and personality, you’d never know she had any physical limitations. She happily hops around as though there’s nothing wrong!" 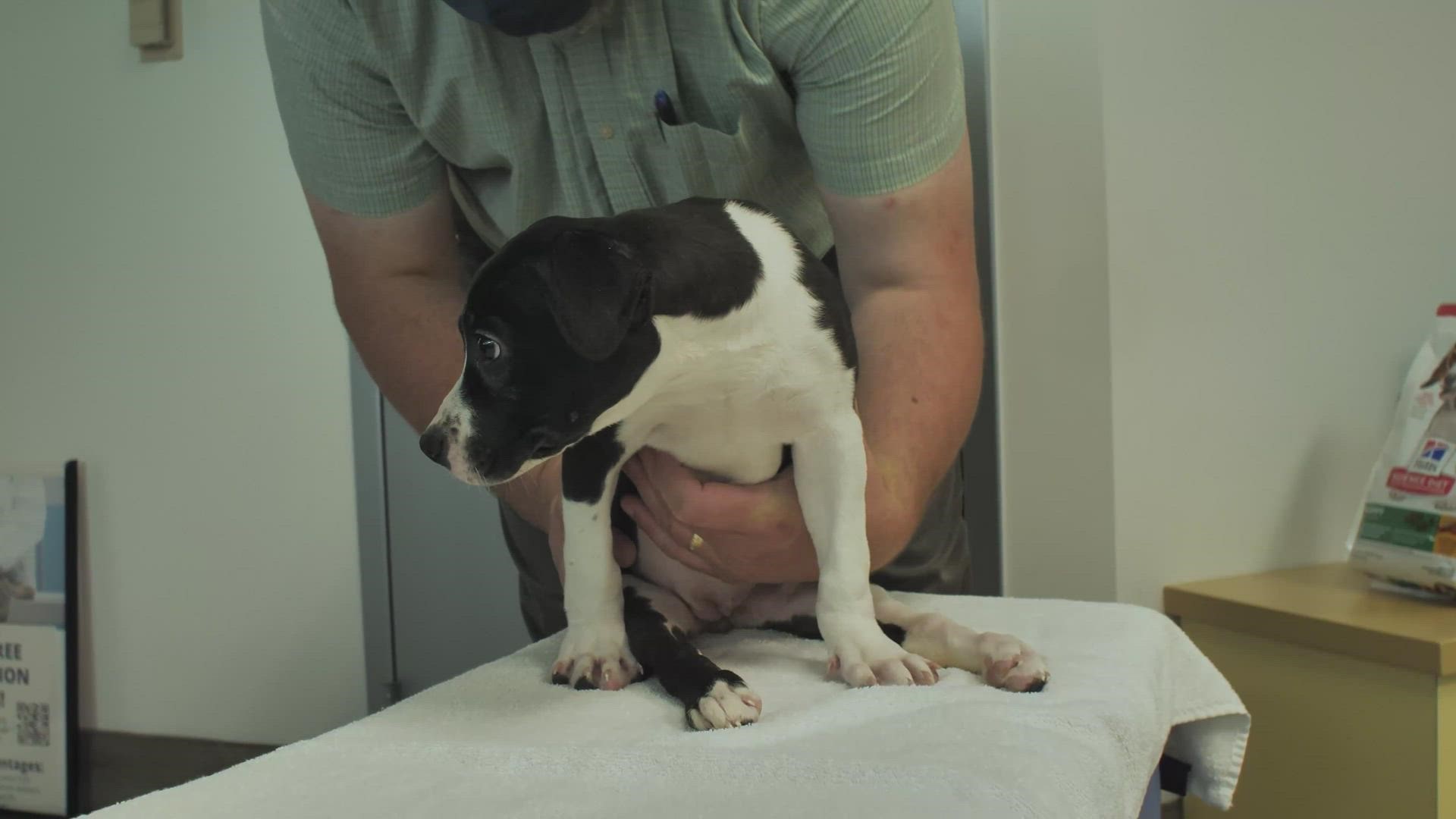 ST. LOUIS — A 4-month-old puppy with paralyzed legs is learning how to walk so she can be adopted to her forever home.

Suzy Q was first surrendered to the Texas SPCA in June and the specific cause of her injuries was unknown. The organization said she didn't meet the criteria to be adopted since she couldn't walk on her own and they weren’t able to give her rehabilitation.

They reached out to PetSmart Charities, which has a relationship with the Humane Society of Missouri (HSMO). Since the humane society has a new state-of-the-art pain management center, they referred Suzy Q to them.

Suzy Q arrived at the Humane Society of Missouri in St. Louis on June 29 and began rehabilitation that same day.

Dr. Travis Arndt, director of veterinary medicine at the Animal Medical Center of Mid-America, said she's not fully able to walk on her own but she's making progress.

“She had taught herself how to get around by putting her hind legs both to one side and scooting around, dragging her bottom half along with her,” Arndt said. “She is still not fully able to walk on her own yet, but she has made a lot of progress in starting to use her hind legs.”

“From her attitude and personality, you’d never know she had any physical limitations – she happily hops around as though there’s nothing wrong!” he said. “She is very curious, friendly and treat-motivated.”

Since her recovery is still ongoing and they don’t know the extent of additional or long-term care she may require, it’s difficult to say if an adoptive family will have to consider extra responsibilities for her.

Arndt said she doesn’t seem to have any issues around other dogs but since she hasn’t spent much time around kids or other pets, they don’t know for sure how she would interact with them.

“But we also don’t have any reason to suspect that she’d have any issues getting along with anyone,” he told 5 On Your Side.

Suzy Q receives several different kinds of therapies every day. She walks in an underwater treadmill, which offers high-resistance, low-impact hydrotherapy where she can use her hind legs in a normal walking posture.

Arndt said she has progressed to where she sometimes is able to support herself and walk, while other times she needs a staff member to move her hind legs manually in step with her front legs.

In addition to her therapy, she also has a specifically fitted dog wheelchair that allows her to run around and get used to walking independently.

The Animal Medical Center of Mid-America took on Suzy Q’s rehabilitation without any designated funding. Anyone who would like to donate to help with her care can do so by clicking here.

Arndt said she’s making good progress but they still don’t know if it will be weeks, or months, before she can walk on her own, which will determine when she’ll be ready for adoption.