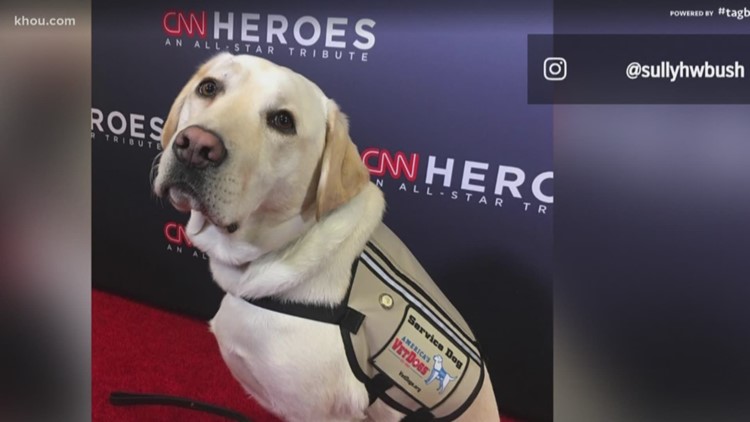 Sully the service dog honored with 2019 AKC Paw of Courage

The American Kennel Club, the world's largest purebred dog registry and leading advocate for dogs, is proud to honor the late President George H.W. Bush's service dog, Sully, as the recipient of the 2019 AKC Paw of CourageSM award.

This award is in recognition of his loyalty, dedication and distinguished service.

Sully, a two and a half-year-old Labrador Retriever, is a highly trained service dog who was paired with the former President and Navy veteran in June 2018, and was specifically matched to provide assistance and companionship to President Bush in his daily activities.

The Bush family worked with America's VetDogs to find a dog that would meet the President's needs. Sully assisted with everyday tasks such as retrieving items, summoning help, and most importantly providing companionship to President Bush in his daily activities.

In February 2019, Sully joined the Walter Reed Bethesda Facility Dog Program as a Navy Hospital Corpsman Second Class (HM2), where he will provide interactive care for patients and staff using innovative Animal Assisted Interventions (AAI) during their road to recovery.

"The devotion and comfort that dogs provide their owners goes unmatched," said AKC President and CEO Dennis Sprung. "Sully served the late President George H.W. Bush honorably; providing him support and assistance, but even more importantly, love and companionship. The 2019 AKC Paw of Courage gives us an opportunity to pay tribute to the devotion that Sully brought to the late President in the final months of his life."

The Labrador Retriever even has an Instagram account (@SullyHWBush) where he has grown his following to more than 250,000. Sully will be honored with a 2019 AKC Paw of Courage medallion and an engraved plaque in honor of his notable service to the late President George H.W. Bush.

"It's an honor for America's VetDogs to accept the AKC's Paw of Courage Award on behalf of Sully," says President and CEO John Miller, America's VetDogs. "America's VetDogs is very proud of Sully and his service to President Bush. Sully is a wonderful example of all of the service dogs that we provide to our nations veterans and we look forward to him continuing his mission at Walter Reed National Military Medical Center."

Any working dog is eligible to receive an AKC Paw of Courage; the award is not specific to purebred dogs. To nominate a dog for a Paw of Courage award, click here.

RELATED: Sully the service dog prepares to embark on a new adventure after Christmas