This is the only Ibex Rare release for 2018. The Variant II is a variation on The Variant which was released in Spring 2017.

Nestled deep within the belly of The Schlafly Tap Room, below the footsteps of patrons and beyond the daily routine of brewing, lies a sacred room that connects the north and south structures below the earth. This solace room, quiet in space and undisturbed by light and motion, is where the most favored batches are brought to rest and evolve.

It is here the beers spend extended resting times in spirit barrels of different varieties. Then, the beers will make their way upstairs to Schlafly’s Horn & Quill Room that features a craft bottling line as well as two foeder tanks, made with Missouri white oak from Missouri company, Foeder Crafters.

From there, what can only be described as the rarest of beers are let loose on the earth, ready to wow.

Welcome to the Ibex Cellar.

From the cellar itself, sprung the idea of creating a premium series of beers. One series called “From The Ibex Cellar," featured six new, handcrafted beers. A second series is even more exclusive, "Ibex Rare," which showcase the Schlafly brewers commitment to the artistry, ingenuity, and passion for craft beer.

The series showcases what happens when the Brewers take a no-holds-barred approach to brewing beer. The series predecessors include Lazy Ballerina, The Eleventh Labor as well as Devil’s Farmhouse.

"The fun of creating a beer for the Ibex Rare series, is that there are no limits on us as brewers," said Jared Williamson, Schlafly Lead Brewer. 'When it comes to ingredients, what barrels to use, everything is an option."

So, while creativity and innovation are at the heart of the brew, so goes with it a sense of responsibility to both the beer and customer. "We want to make the best, most focused beer we can, no matter what we put into it," said Williamson.

Get Ready For Variant II

Schlafly Beer will be releasing its rarest beer of the year on Saturday, December 8. This is the only Ibex Rare release for 2018. The Variant II is a variation on The Variant which was released in Spring 2017 and met with great fanfare and a line around the block. The first time, I remember chasing beer at Schlafly.

The original Variant was a whole new imperial stout base beer designed by Williams. A big beer itself, at 9.4% ABV, they wanted to develop the new stout base so it could become more of a canvas from which to grow from. This beer was refined and subdued on the hops, and let the malts play. It became that perfect canvas from which to create The Variant II.

The Variant II follows its predecessor but is its own beer. The Variant II is a blend of two different variations of that base 9.4% Imperial Stout, offering a multi-layered experience. While The Variant was aged in port barrels with cocoa nibs, The Variant II is a blended stout that is both aged in brandy barrels as well as aged with sour cherries. The brewers aged a portion of the stout with the sour cherries for four weeks and another in the brandy barrels for six months. After the aging process, they developed the ideal blend of the two liquids.

"Brandy barrels are much more subtle then whiskey," said Williamson. "I didn't want it to be busy, but rather velvety and luxurious. You'll get cherry on the nose, rich dark malts, chocolate notes even, but there is actually on chocolate in this beer. None."

Into the glass, you'll get a bit of oak, and then as it warms, the sour cherry and the barrel come together. Kind of a classic cocktail. I recommend that if want to maximize this beer, let it sit for 30 minutes after pulling out of the refrigerator before opening and pouring. You'll want to treat it almost as if it were a cask beer would ideal.

The idea for what The Variant II should be, came from the breweries recent history of creating beers influenced by the deconstructing cocktails. You may recall the Hop Toddy!

"We were thinking of the classic Manhattan, and that, of course, brings cherries to mind," said Williamson. Cherries can be such a make or break. There is such a sweet spot because in a way it could swing towards cough syrup, or become to sour."

The Variant II will continue the look of The Variant and Devil’s Farmhouse with a simple embossed plaque on a unique 750 ml bottle. Each bottle will be sold for $30 with a limit of three per customer. There will also be 50 bottles of The Variant available for purchase for $30 on a first come, first serve basis.

As far as the next beer, we have no timeline," said Williamson. "But I will tell you, we are looking at using barrels that we've never used before, and possibly bringing back a Schlafly classic." 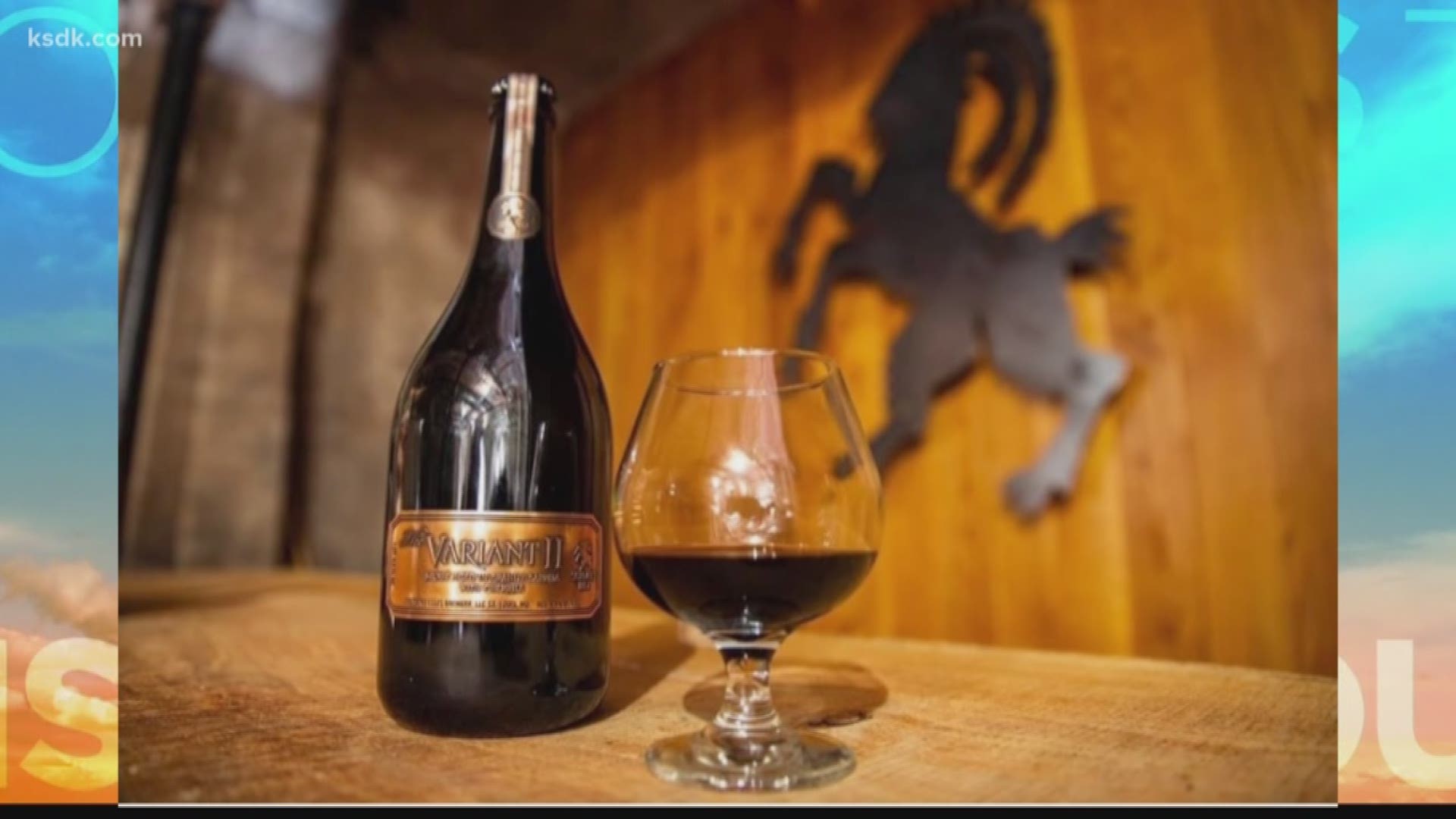