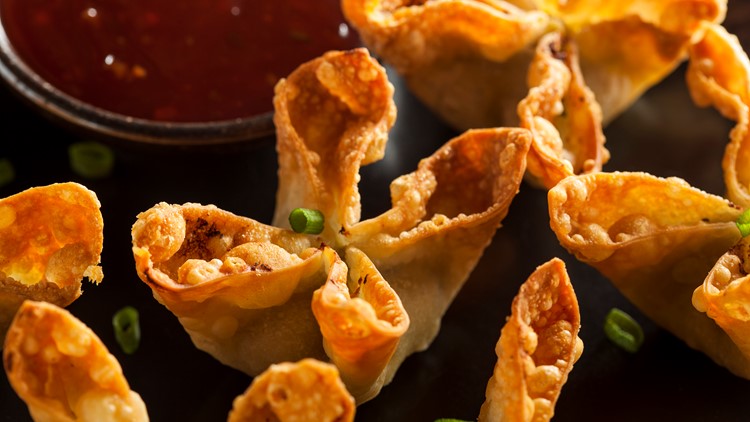 Where to find the best crab rangoon in town

ST. LOUIS – When we put the question, ‘Who has the best crab rangoon is town?’ on our Facebook page, the comments started rolling in.

“I miss crab Rangoon Soo much! It's unheard of here in Minnesota. They look at me like I have three heads when I ask for it 😭,” she said.

So, based on the community feedback we received, we decided to make a list of the top five places in our area to get the delicious treat.

But first, what exactly is crab rangoon and how did it come to be a staple in American-Chinese food?

Since cream cheese – a main ingredient in crab rangoon – is not indigenous to Chinese cuisine, crab rangoon is believed to be a very modern dish.

The earliest mention of crab rangoon was in 1958, according to FoodTimeline.org. It was in a review of Trader Vic’s at the Savory-Plaza in the New York Times.

The description of the cream cheese and crab filled treat, “This is a crabmeat deep-fried in a crisp, thin shell.”

According to FoodTimeline, the first recipe for crab rangoon was published by Trader Vic’s in the 1960s.

The website mentions the time period makes sense because, after World War II, Chinese, Japanese and Polynesian food was considered “exotic and trendy.”

So, traditional foods were adapted to suit American tastes.

Now that we told the tale of crab rangoon, where can we get the best of the best in our area?

The top spots in town

Out of the more than 500 comments, Green China received the most votes on our page.

Green China has three restaurants in the area in St. Charles, Lake St. Louis and St. Peters. The St. Peters location got the most votes!

On Facebook, Alex Bingham said he moved out of the area of his beloved Green China in St. Charles and misses it a lot.

“Green China. I moved out of their radius and it's 100% the thing I miss most. I've never had a better rangoon,” he wrote.

“Green China in St. Peters Mo. off of Mexico and Salt Lick. They are so good and sweet,” wrote Tracy Ann Suchanek.

So, crab rangoon at Green China is good… but could it be life changing?

“I'm with you green China is life changing thanks for the suggestion,” said Alex Zimmermann.

Green China in St. Peter’s is located at 627 Salt Lick Road and is open Tuesday-Sunday. Click here for information on hours and a look at the menu.

Several people on Facebook voted for China King in various places across our area. So, we came to the conclusion that China King is good just about anywhere you go!

There are several King China restaurants in our area, too many to list!

Another Facebook user said not only are the rangoon’s in Arnold the biggest and best, but they also come with instructions for any leftovers.

“China King in Arnold! They are huge! The sweet cream cheese filling with crab you can see. They come in an 8 count with reheating instructions,” wrote Loretta Rae.

Click here to find a China King in your area.

“Straightforward eatery in a strip mall” is how its described on Google.

The one and only Lemay Wok received several votes on Facebook without much explanation, so the rangoon’s there must speak for themselves.

Lemay Wok is located at 4530 Lemay Ferry Road in south St. Louis County, Click here for hours and a look at the menu.

There wasn’t an overwhelming amount of Bo Fung fans on our Facebook, but the fans who commented were very enthusiastic about their love for the St. Louis Chinese spot.

“YES!!!! BO FUNG all the way!!! 2nd best since Bo Fung is too far from me now is Great Wall on Telegraph by the South County WalMart!!!” said Dawn Smick Davidson.

Bo Fung is located at 6810 Gravois Avenue. Click here for hours and a look at the full menu.

And last but certainly not least, homemade crab rangoon!

OK, homemade isn't a restaurant in town but the love for homemade rangoon runs deep.

“My house. Lol. If I am known for one signature dish, that is it,” Lynda Melton said.

Another commenter said her daughters are the best in town.

And, of course, momma’s house is the right answer to almost anything.

Don’t know how to make crab rangoon or where to even start?

Here are some easy recipes:

Crab Rangoon from Dinner then Dessert

The Crab Rangoonies from The Food Network

And here is a crab rangoon recipe with a twist… Layered Crab Rangoon Dip from the Food Network.