ST. LOUIS — A 16-year-old boy from the Metro East is supposed to be back in school, but instead, he's fighting to get back the life he once had.

On August 3, Cortez Dones was riding his bike on Route 161 in Swansea when a car hit him. His family said witnesses told them he went flying as high as the traffic signal. He was not wearing a helmet, and he hit his head.

Since then, he has been at St. Louis Children's Hospital.

"He was in adult diapers. He had an NG tube to feed him because he couldn't swallow or drink," said Anne Albers, a pediatric nurse practitioner who has worked with Cortez.

She said at first, it was impossible to understand what Cortez said. On top of many scratches, a broken pelvis, and a broken arm, Cortez had significant brain damage.

Doctors said when he hit his head, his brain shook, which left lots of smaller injuries.

Every day in the hospital, Cortez and the medical staff aim for progress. He is in therapy for four to six hours every day, including physical and occupational therapy. 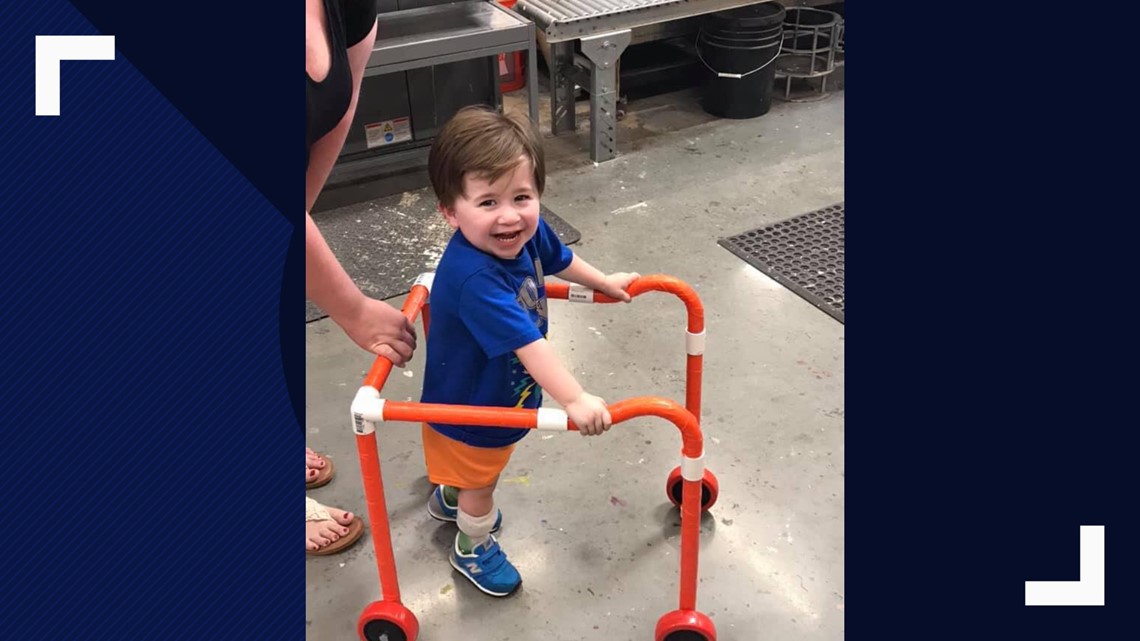 Home Depot workers build boy's walker out of PVC piping
CEDARTOWN, Ga. -- Workers at a Georgia Home Depot store came together to help a family in need. Christian Williams Moore said her son, Logan, has hypotonia which affects his muscle tone and makes stability a struggle. It makes him unable to walk unassisted at the moment.

Cortez's parents are constantly at the hospital with him. He likes to play video games in his room. Along the wall, there is a row of cards wishing him well. There is also a military uniform from the local Air Force base.

Cortez wants to join the military.

"I want to serve my country," he said.

His goal is to go home soon. Doctors said that could happen this week.

Bones can heal, but the brain is more complicated. Cortez said it's hard to speak in his interview with Five On Your Side.

"There's a section of your brain that is injured that will never be the same," said Albers.

His family fears the injuries to his brain could last forever.

He may not ever truly be the way he was before August 3rd, but Cortez and his family hope one day, with lots of hard work, he can still sign up to serve.

His family said they are concerned about the medical bills they face and the additional expenses that could come with retrofitting their home for Cortez.

They started a GoFundMe page, which you can donate to here.

Swansea Police said the driver who hit Cortez stopped and has cooperated. The police chief said Illinois State Police are doing a crash reconstruction to determine what led up to the incident.