"I think it really resonated with people because, I mean, this year has just been so hard on everyone" 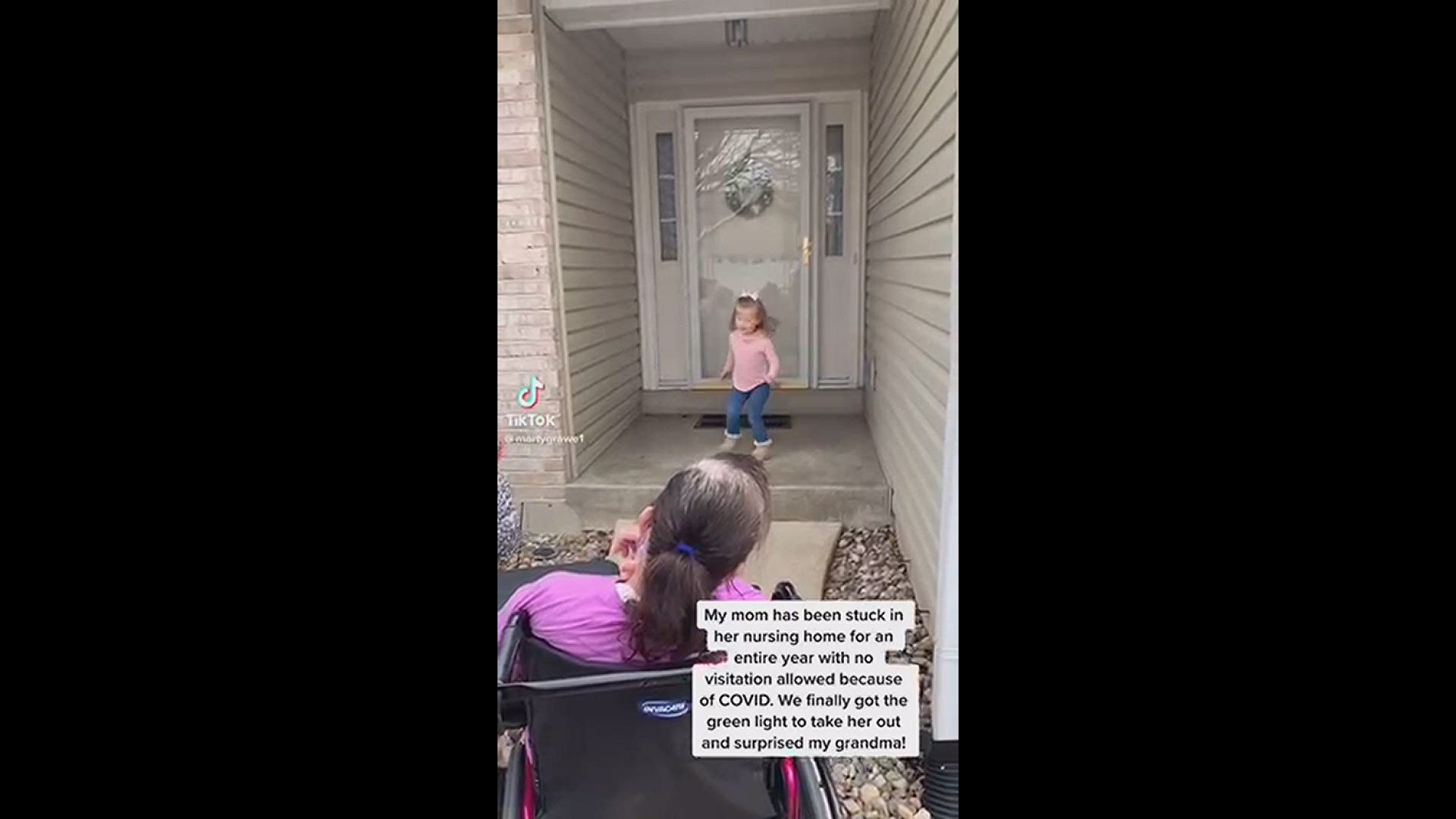 ST. LOUIS COUNTY, Mo. — The COVID-19 pandemic has changed the lives of so many people around the world, in many ways.

Whether it was mental health struggles, job loss or death – we’ve all been hit with hard times over the past year.

One of the biggest sacrifices families had to make was being separated from loved ones, especially those who are high risk. Although people found ways to stay connected, none of those things compared to being able to hug and hold our loved ones.

Now that the vaccine is being distributed across the country, people are finally starting to reunite safely.

One St. Louis area family recently captured the emotional moment when four generations reunited after being apart for a year. They put the video on the social media app TikTok and it went viral with more than 125,000 views.

"All of a sudden, it took off," Julia Wagner said.

In the video, Wagner and her sister, Sarah Bogers, surprised their grandmother by bringing their mom and kids to see her at home. Their mom is in a nursing home, which recently loosened some of its restrictions.

In the video, their grandmother walked out of her home with her arms wide open and tears in her eyes to finally hug her daughter after so much time apart.

Wagner said they posted the video just for the family and weren't expecting the reaction that it got from other people across the platform.

“I think it really resonated with people because, I mean, this year has just been so hard on everyone,” Wagner said. “A lot of people who are commenting have had people in nursing homes.”

Their mom suffered a traumatic brain injury in 2004 and has needed 24/7 care ever since then. They used to visit her every day, and then COVID-19 hit.

“We weren’t allowed inside the facility anymore, we were just restricted to FaceTiming or we’d have to stand outside her window,” Bogers said. “We weren’t able to physically see her, touch her, anything like that for a year.”

Having their mom isolated for so long was especially challenging because she couldn't fully understand what was happening due to her injury.

“She pulled out a lot of her hair because she was so frustrated and she doesn't have the capability to express that frustration using words all the time because of her brain injury," Wagner said.

"It got to a point that was cruel, keeping her so separated from her family," Bogers said.

Wagner said their mom was on cloud nine the day she reunited with the family, but she believes she's still suffering from the long-term ramifications of being isolated.

"We understand the restrictions, but at some point you have to take in their mental health into perspective. These are people who don't have years left to live like a lot of us," Wagner said.

But now with the rollout of a vaccine and nursing homes beginning to loosen restrictions, they are finally seeing some light at the end of a dark year.

"Now we can actually sit at a table, because we're both vaccinated, we can touch her, we can hold her hand, we can hug her," Wagner said.

The two sisters also talked about how the past year has made an impact on their children. Wagner was pregnant during the pandemic, so her mom just got the chance to meet her grandson.

"With all kids growing up in COVID now, it's been a weird world for them," Wagner said. "We're excited to start getting to this new normal now, that hopefully things start resembling life pre-pandemic."

In the short-term, Wagner and Bogers will be spending Easter with their mom and the rest of the family, which is the first holiday they've all been able to spend together in a year.

Have you been able to see or squeeze a friend or family member for the first time in a year? If so, we would love to see your happy moments and share them with the 5 On Your Side audience.

Open the free 5 On Your Side app and tap “Near Me” in the lower righthand corner. From there, tap “Share with Us” to upload photos or a video. Make sure to tell us a little about your story.

And then, look for your reunions in the app and on the air.