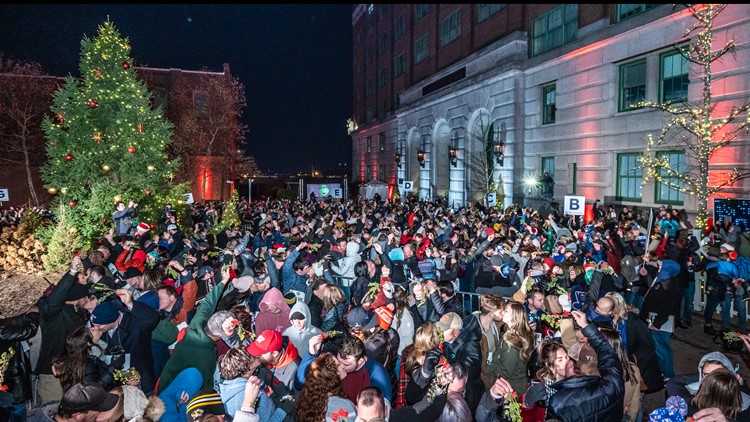 St. Louis couples help break records for 'most couples kissing under the mistletoe'

ST. LOUIS — Love was in the air in St. Louis Saturday night, so much so, that it’ll go down in the record books.

Hundreds of couples gathered at Anheuser-Busch to participate in an attempt to break the Guinness World Records title for most couples kissing under the mistletoe.

All that smooching paid off.

In St. Louis, 480 couples gathered at the Biergarten and Tour Center, held up their individual sprig of mistletoe and kissed for (at least) five seconds to break the world record for couples kissing at a single location. The previous record was 448 couples.

But that wasn’t the only record broken.

Hundreds of couples were gathered at two other Anheuser-Busch breweries looking to break the multi-venue mistletoe kissing record. In all, 896 couples in St. Louis, Fort Collins, Colorado and Merrimack, New Hampshire puckered up for their sweethearts.

Guinness World Records officials were at each location for the festive record-breaking attempt and verified that the couples did in fact set the new standard for couples kissing under the mistletoe at multiple venues.

“This year we wanted to create new excitement and remind people to open their hearts this holiday season,” said Kathryn Sattler, Head of Beer Category and Community at Anheuser-Busch. “With this record-breaking opportunity, we wanted to help everyone build real connections in their communities, their neighborhoods and with the ones they love. And thanks to 896 couples coming together across the country, we certainly spread some love this holiday.”

And at least one couple took their relationship to the next level. One man was seen proposing to his girlfriend at the event in New Hampshire, and she said yes.