Where to watch fireworks in the St. Louis area this year

Here is a list of events around the St. Louis area we’ve found so far 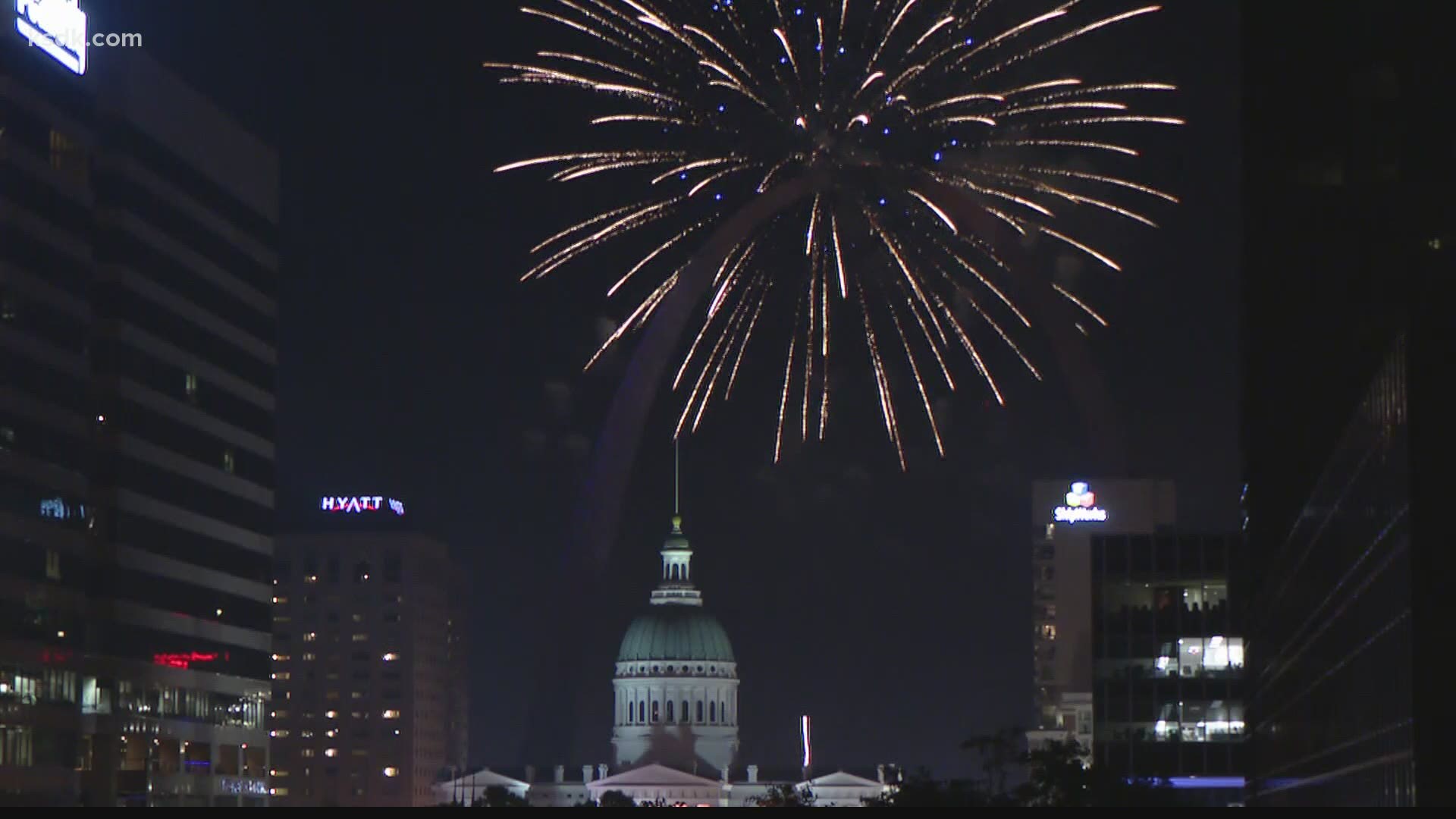 ST. LOUIS — With Fourth of July right around the corner, and COVID-19 restrictions eased this year, you may be wondering what to do for the holiday.

Several towns across the area will be hosting firework displays and events to celebrate. Here is a list of events around the St. Louis area we’ve found so far.

Fair St. Louis’ Fourth of July event is back this year but instead of several nights of fireworks, organizers are putting together one big show.

The Fourth of July Fireworks Spectacular will be held Sunday, July 4, starting at around 9:45 p.m. Fair Saint Louis said it will be the largest fireworks show it’s ever produced. There will be three barges positioned on the Mississippi River blasting off 3,000 shells choreographed to patriotic music.

“Thanks to the generosity of so many members of our community, including Enterprise and Edward Jones, Fair Saint Louis is thrilled to produce one of America’s largest fireworks celebrations, providing a uniquely St. Louis experience that has been an annual summer tradition for our region for 40 years,” said Fair Saint Louis general chairman David Estes.

Guests can come downtown to watch the show in person or watch it online from home.

For more information on the event, read: "Fourth of July fireworks return to downtown St. Louis this year with largest show ever."

The “Fireworks Cruise at the Gateway Arch” will take place at 50 S. Leonor K. Sullivan on the Fourth of July starting at 7:30 p.m.

Guests can enjoy dinner and a Dixieland band while cruising down the Mississippi River on the Becky Thatcher paddleboat before docking underneath the Arch to watch the fireworks. The cruise costs $53.

Kirkwood is holding its annual Fourth of July Freedom Festival and Fireworks show this year. The event will be held at Kirkwood Park on July 4.

Music by Fanfare will start at 7 p.m. and fireworks will begin at dusk. Food trucks will be located southwest of the Racquet Sports Center building in the park.

West Adams will be closed to traffic between Geyer Road and Church Avenue from 5-10:30 p.m. Rifle Range Drive and Amphitheater Drive will also be closed.

We are pleased to announce the return of our annual 4th of July Freedom Festival and Fireworks show this year.

Thanks to our generous sponsors (to be announced at a later date), this event will return this summer to Kirkwood Park on Sunday July 4, 2021. pic.twitter.com/xqVHZPtfH6

Wentzville is hosting its Liberty Fest and annual Fourth of July parade this year. The parade will begin at 1 p.m. at the Wentzville Ice Arena at 910 Main Plaza Drive.

After the parade, residents can head to Progress Park Pool to take part in free activities that include inflatables, airbrush tattoos, a rock-climbing wall and cornhole boards from 5-8:45 p.m. Preregistration is required for this event. Live music featuring That 80s band will be held from 6-8 p.m. and a professional fireworks display will begin at 9:05 p.m.

O’Fallon is bringing back its Heritage & Freedom Fest this year after it was canceled last year due to COVID-19.

The festival kicks off on July 2 with a carnival, family-friendly sideshows and other activities from 4 p.m. to 11 p.m. Carnival rides, festival food and merchandise vendors will be open throughout the weekend.

On July 3 and 4, there will be free concerts, fireworks and free family-friendly activities. On the Fourth of July, O’Fallon’s Heritage & Freedom Fest Parade will kick off from Main and Third streets and end at T.R. Hughes Boulevard near the festival entrance.

St. Charles is hosting an Independence Day “bonanza” that kicks off July 2 at 222 S. Riverside. The event features three full days of carnival attractions, live music and food and crafts vendors. The event is free to the public.

For more information on the event, visit discoverstcharles.com.

Fireworks begin at around 9:40 p.m. on July Fourth and will last about 27 minutes.

The Richard and Lori West family will host their fourth annual fireworks show at New Melle Sports and Rec on July Fourth.

The venue opens at 4 p.m. and fireworks start at dusk. Hotdogs, burgers and limited concessions will be available for purchase. There will also be a DJ at the event.

A variety of fireworks shows will kick off in the Metro East starting June 27 and running through July 5.

Firework shows will start at Beverly Farm in Godfrey and the St. Louis Regional Airport in East Alton on June 27. Guests can bring blankets and lawn chairs and spread out under the stars to watch the shows.

Beverly Farm will feature an ice cream truck. Family fun activities, refreshments and food will be available at St. Louis Regional Airport prior to the launch of fireworks. Admission is free.

Fireworks take centerstage in Carlinville and Grafton on July 2.

The Carlinville show will be at the Macoupin County Fairgrounds and is limited to the first 100 cars. Parking spaces can’t be reserved in advance, according to a news release. Outside food and drinks are allowed but alcoholic beverages are prohibited.

Guests can enjoy entertainment and food and drink specials at Grafton businesses and when the sun goes down, enjoy a firework show near Lighthouse Park at the confluence of the Illinois and Mississippi rivers. Admission is free in both Grafton and Carlinville.

The Alton Fireworks Spectacular will be held on July 3. The fireworks show is returning after a one-year pause due to the COVID-19 pandemic. The show includes an evening long performance by the Air National Guard Band of the Midwest leading up to the fireworks show over the Mississippi River.

Guests can enjoy food and drinks at the Liberty Bank Alton Amphitheater from Angie Burger and The Sweet Divine. Fireworks begin at 9:30 p.m. and admission is free.

Fireworks will be held in Edwardsville on July 3. The festivities begin at 2 p.m. with live music from Starlifter, a popular U.S. Air Force Band of Mid-America. The Edwardsville Municipal Band will perform at 7:30 p.m. Refreshments will be available, and admission is free.

On the Fourth of July, fireworks kick off in Jerseyville at the Jersey County Fairgrounds. The City of Troy is hosting its annual July Fourth fireworks at Tri Township Park.

The annual Godfrey fireworks will take place on July Fourth at Robert E. Glazebrook Community Park. The fireworks will begin at 9:15 p.m. but guests can start parking at 6:30 p.m. Admission is free.

Music by Vince Martin and fireworks over Lake Lou Yaeger will kick off in Litchfield on July Fourth. Music starts at 7 p.m. and fireworks being at 9:20 p.m. Admission is free.

Other celebrations include Greenfield’s Fireworks at the Lake on July 3 and Granite City Fireworks at Coolidge Middle School on July 4. Admission is free for both events.

The third annual Fireworks Over O’Fallon event will be held on July 3 at dusk. The fireworks will be launched near the west entrance of the O’Fallon Family Sports Park.

“Two years ago, we brought back fireworks for the first time in 30 years. Each year, we will continue to make them bigger and better!” Mayor Herb Roach said in a news release. “I hope that all of you will join us in celebrating the holiday and enjoying the community.”

Spectators are asked to park in designated parking areas. There will be no parking in the grass or side of the roadways in the park. Once all the parking spots are filled, no other vehicles will be allowed in the park. Guests can still park their vehicles outside the park and walk in to watch the fireworks from grassy areas.

There also will be parking restrictions on the north side of West Nixon and West Madison. Parking will be prohibited on Venita Drive and Taylor Road. After the show, signs and police officers will direct vehicles towards the east or west exit of the park.

The turf fields and baseball restrooms will be closed during this time. Restrooms near the splash pad and north side of the park will be open.

If you know of any other events around the St. Louis area, email kwheeler@ksdk.com.