‘After I told her she was my hero, she said I know’: Young girl battling cancer dies

Sydney was diagnosed with stage four Favorable Wilms' tumor, a rare form of kidney cancer, in 2015. 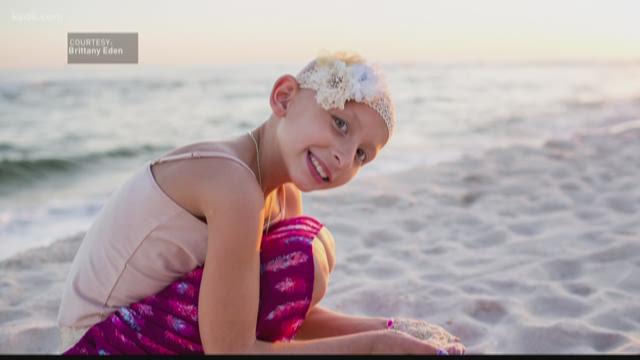 ST. LOUIS – A young girl who inspired thousands of people has died.

8-year-old Sydney Coari, of Hermann, Missouri, died early Wednesday morning, her family confirmed to 5 On Your Side.

Sydney was diagnosed with stage four Favorable Wilms’ tumor, a rare form of kidney cancer, in 2015.

"Sydney flew out of the arms of her mommy and daddy and into the arms of Jesus at 12:35 am, exactly three years to the day that she was diagnosed.

Sydney spent her last hours surrounded by those she loved and loved her. She woke up one last time to tell us she loved us. After I told her she was my hero, she said I know, so I asked what’s you’re superhero name and she spoke her last words, “Super Sydney” as she raised her arm in the air, like she was flying!

Thank you all for your love and support. We will post arrangements as soon as we have them finalized. We now have to spend some time focusing on her siblings and ourselves, and learn how to be a family in this new normal. Nothing will ever be the same again.

And in Sydney’s words... “I know you’re Jelly I get to see Jesus first but if you’re gonna be jelly be strawberry jelly it’s the best. “

In Dec. 2017, Sydney donated more than 4,500 toys to Mercy in Creve Coeur. It was part of her bucket list. Her first item that was on the list was to collect toys to help sick children.

"Every day is a gift. Hug your babies tight, you never know when you're not going to be able to do that again," Her mom told 5 On Your Side in December 2017.

She also got the chance to be a model for a day. A variety of companies, like Kortni Jeane, Roolee Boutique and Modern Burlap, donated their products. The companies said they would use the professional photos in their marketing campaign.

“This is a very real photo shoot,” Robinson said. “The companies are going to take these pictures and use them on their social media, on their website. And they're going to share Sydney's story with everyone who follows them.”

In January, Sydney got go to Disney World thanks to strangers that raised nearly $10,000 to send her and her family there.