Internet comes together to help Texas mom whose belongings, including her son's ashes, were lost by moving company

"It really was a great viral moment when the power of the internet gets the attention of the powerful.” 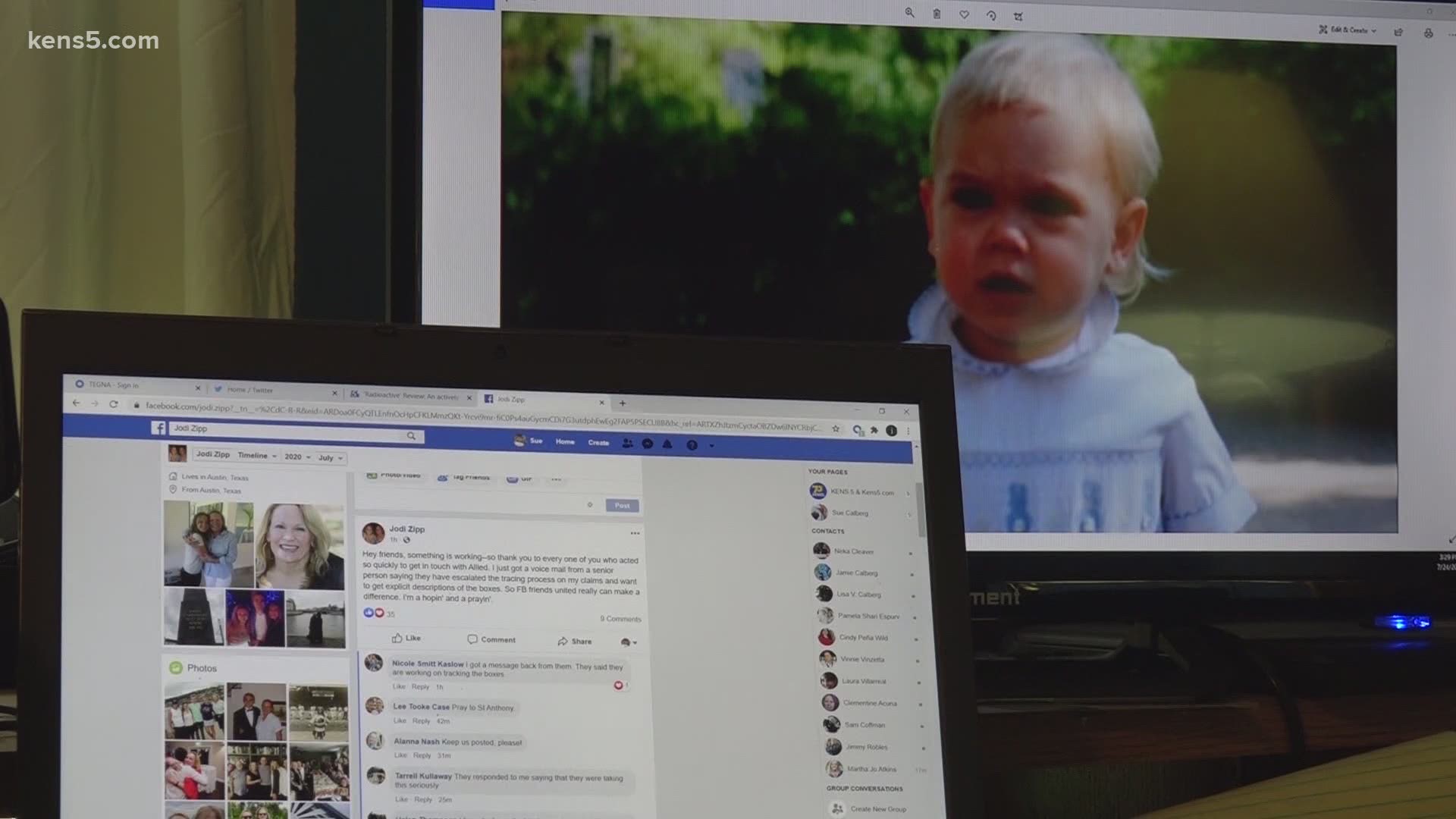 SAN ANTONIO — A grieving Texas mom is desperately trying to recover what has been lost in a cross-country move.

It's a search for ashes and heirlooms, and this is the story of how an internet community came together to help.

His mother, Jodi Zipp, says pictures and mementos of her beloved boy are treasures beyond measure.

But some of those precious items are missing. Zipp says the national firm she hired to move the family from Austin to Michigan has misplaced a number of boxes containing items that cannot be replaced.

"There were sweaters that still smelled like him and a couple of little packets of his ashes that we had not had a chance to scatter yet," Zipp said.

Zipp said her plan was to wait until after the move to sort through the memories of a life lost too soon.

Fighting back tears, Zipp said, “They were full of my children's baby clothes, things I made. I smocked. I sewed. His little tooth fairy pillow that I needlepointed for him and all of that stuff was carefully wrapped in acid-free tissue paper in acid-free boxes and they are not here.”

She said that, due to coronavirus travel restrictions, she could not be in Michigan when the movers delivered her goods in April. Zipp said she arranged for a local resident to be at the house and sign for the shipment.

When the family was finally able to make the trip, Zipp said she started unpacking and realized a number of important boxes never arrived.

She said the moving company initially promised to look into the matter, but made no progress. Eventually, they stopped returning her calls.

“The first reaction I got from their insurance adjuster was because I was not here to inspect the load and determine what was missing when it was delivered, that I had no claim.”

Zipp said a second company representative promised to help, but never called back.

Desperate for answers, Zipp said she turned to social media. She asked her friends to reach out to the company on her behalf.

"I've got some tough women on my side," Zipp said, explaining that within a matter of hours, a number of people had reached out to the firm on Facebook, Twitter and other social platforms. “I was surprised. I thought people would express sympathy, but it really was a great viral moment when the power of the internet gets the attention of the powerful.”

Zipp said the company responded, and promised to expedite the search.

“I've been overwhelmed and touched by the outpouring of people. They said this won't stand and they really had my back and stepped up and did whatever they could,” she said.

In a follow-up post, Zipp told her friends she “was a-hopin’ and a-prayin’" that the invigorated effort would be successful.

Zipp said she hopes her keepsakes ended up with another family.

“I haven't given up all hope. It's possible that those boxes are in another person's storage unit or garage because the big trucks carry multiple peoples' belongings, you know," she said. "It wasn't just my stuff, so there's some hope."

Zipp said her friends will keep up the pressure until they find answers. And OG's ashes.

“Those things were the last vestige of my connection with that boy, so it's important to me. He's in there."

The support of her friends, Zipp said, is what has made the journey possible.

“I'm really grateful because it has given me hope," Zipp said. "This morning I woke up thinking it's a needle in a haystack, especially because they were not being responsive. But now I do have hope and that's a precious thing."

RELATED: Abandoned puppy rescued from the side of the road is ready to find a forever home