'It's a campaign of hate': Webster Groves family receives letter calling for removal of BLM sign

She posted about the letter on social media, where someone sent her a link a story about a family in Oregon that received a letter with the same wording 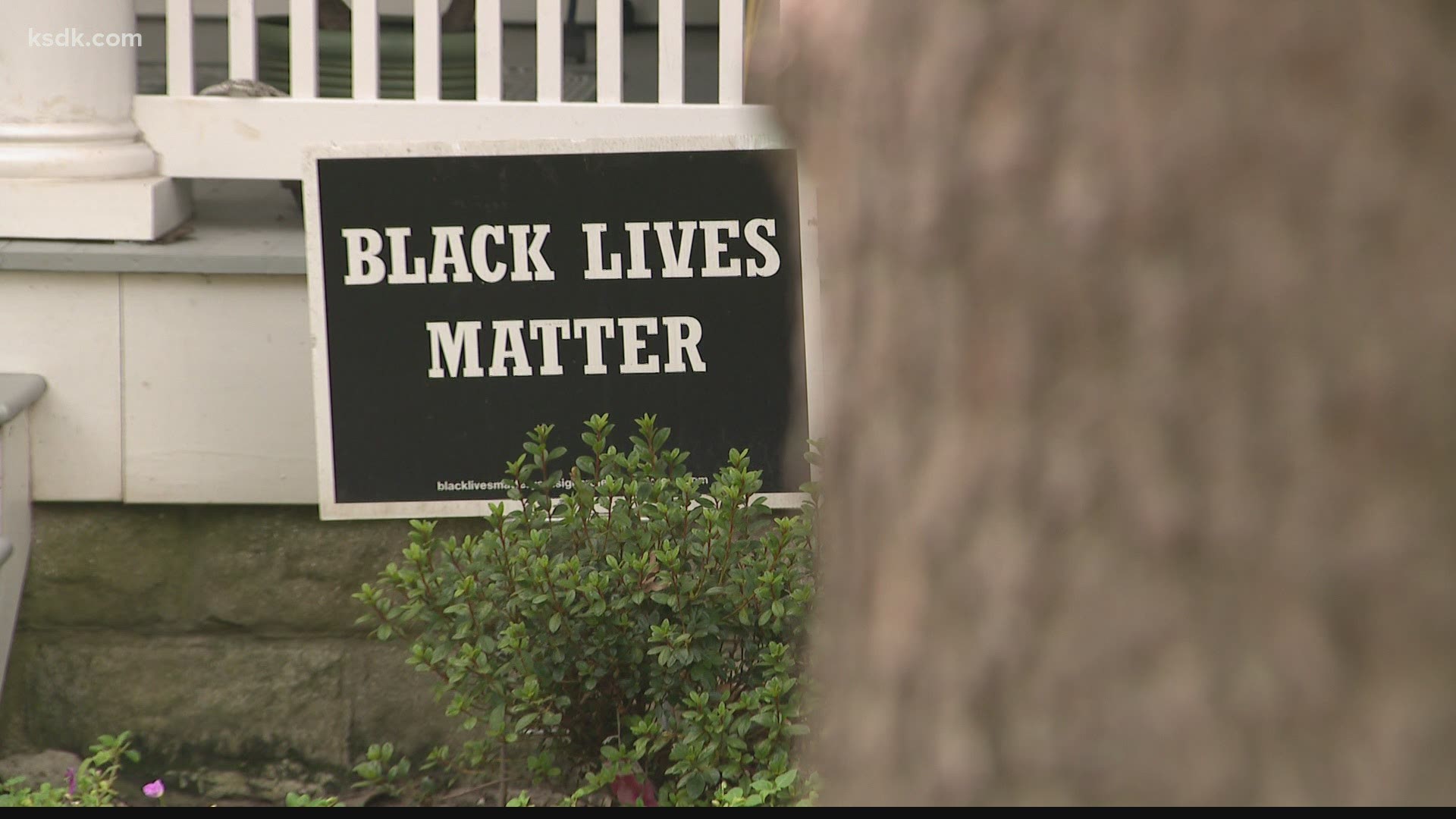 WEBSTER GROVES, Mo. — For Courtney Schaefer's family, the decision to put a "Black Lives Matter" sign in front of their Webster Groves home was about being neighborly.

“I happen to work in Jennings,” Schaefer said. “Michael Brown went to my school and actually had lunch with one of the teachers I worked with, so it’s very close to what I do and how I feel. It was natural.”

They put their first sign up about three years ago.

“It was stolen, so that’s when we moved it from the front of the yard closer to the house," Schaefer said.

She said multiple homes were hit by sign snatchers, but she and many of her neighbors were quick to replace them.

Late last month, she received a letter in the mail addressed to "Resident" with her address upside-down on the envelope.

“We, your neighbors, appreciate that you have strong political and social viewpoints and wish to communicate to others via your yard sign," Schaefer read.

The two-sided letter went on to explain that homes are not "made to be billboards for your opinions" and telling her family to "save your political viewpoint for insider your home."

“Thank you in advance for caring enough about the people you live side-by-side, especially with different viewpoints, to remove your sign," Schaefer read. " Signed, your neighbors."

Schaefer said for "the briefest second" she wondered if one of her neighbors had sent the letter, but that quickly went away after she realized none of the other people in her neighborhood had received letters for their signs.

She posted about the letter on social media, where someone sent her a link a story about a family in Oregon that received a letter with the same wording.

“It’s a campaign of hate," Schaefer said. "They are trying to instill uncertainty which leads to fear. I think what that letter says is that Black people wouldn’t be welcome here, and I don’t think that’s true.”

According to Census data, more than 90% of Webster Groves' population is white while Black residents make up less than 6% of the population.

Schaefer said she knows her community is predominately white and while the letter does not reflect her community, she said it's a wakeup call.

“There are folks here who feel very strongly about Black Lives Matter, but we still have issues," Schaefer said. We still have a long way to go.”

One of the claims in the anonymous letter is that the signs hurt property value and drive down interest in homes in the neighborhood.

Susan Schiff, who's been selling homes in Webster Groves for 35 years, said she has not seen any trends that support that claim.

"The reality is prices are up," Schiff said. "The number of sales are up year-to-date from last year to this year. If anything, I'm seeing a bump."

Schiff said buyers factor in a number of things when searching from a home, with comfort and kind neighbors high on the list.

"Racism, there's no room for that," Schiff said. "No place for that. I think whoever wrote this letter is sadly misinformed."

As news of the anonymous letter spread, another issue popped up in Webster Groves. Local churches like Peace United Church of Christ and First Congregational Church of Webster Groves started receiving backlash, and were even defaced with graffiti, after holding events to honor the lives of people of color who were killed unjustly.

In response to those incidents and the letter, the city's mayor and city council released a letter denouncing racism and laying out the partnerships and strides the city has made since the beginning of the summer.

In additions to efforts already made, the city is planning to conduct an equity audit of city government and continue work with policing.

Webster Groves City Council Member Laura Arnold lives in Schaefer's neighborhood and said she is both surprised and not surprised about the letter.

"I want to say we were very surprised, on the one hand, because we often don’t think that is who we are as a community," Arnold said. "But on the other hand, we are like every other community in the country right now that is trying to deal with issues of racial equity and become more inclusive.”

Arnold said being a predominately white community does not excuse racism and that, if tangible changes are made, Webster Groves could be an example of how to properly address it.

"If we’re serious about this and we’re persistent about finding ways to have those conversations, we could be an example to others," Arnold said.

As for the person who sent the letter to Schaefer, Arnold said she has one question.

“I would ask what they’re afraid of," Arnold said. "Diverse communities are strong communities, so I would want to know what fear drives them to do this anonymously, as well.”