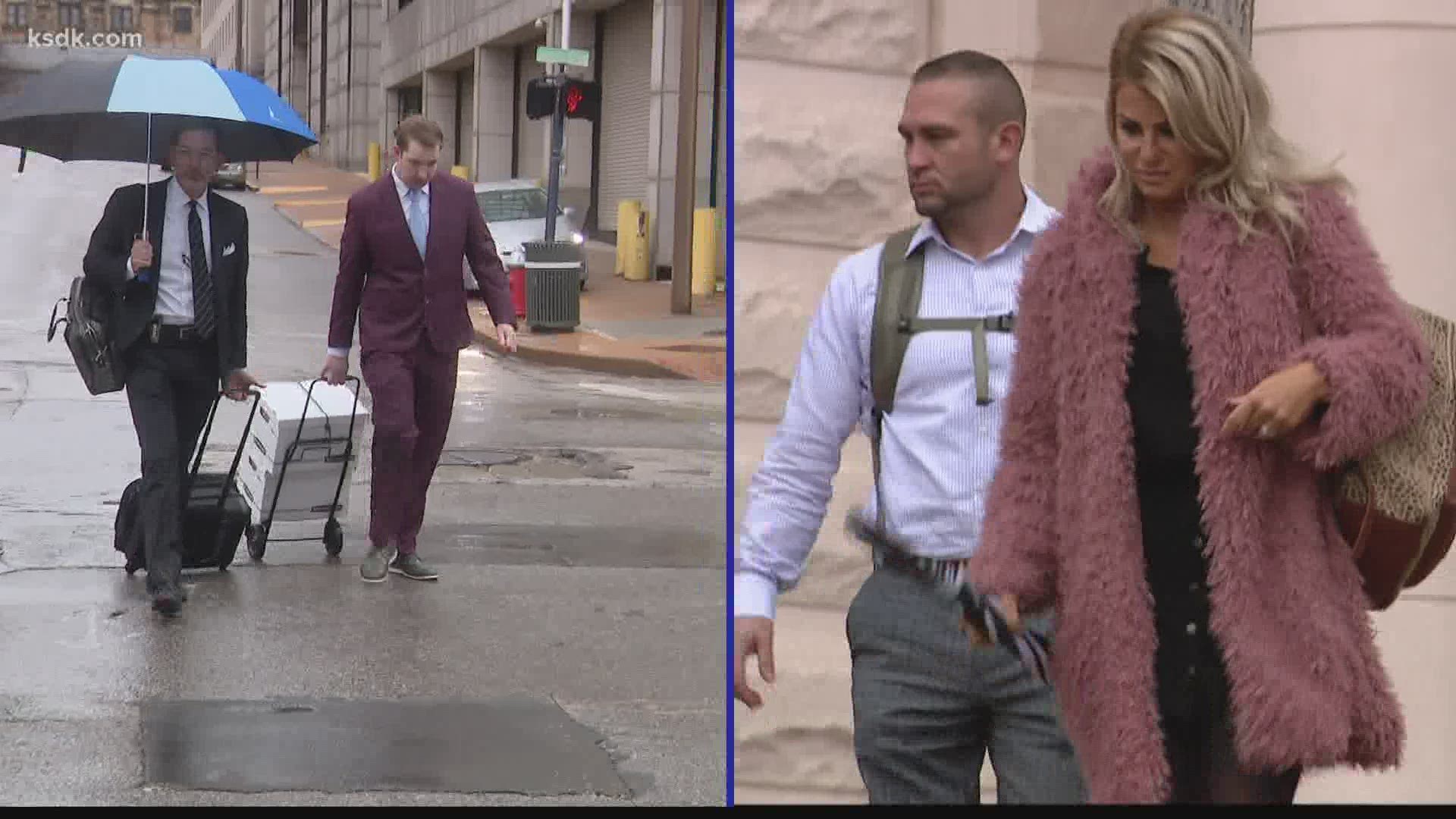 ST. LOUIS — An all-white jury has been seated for a second time to decide the fate of white St. Louis police officers accused of assaulting a Black colleague who was working undercover as a protester in 2017.

Defense attorney Scott Rosenblum successfully argued the lone Black man who made it to the final panel should be dismissed because he has a cousin who is incarcerated and is still in touch with his cousin’s mother. He added the government routinely uses incarcerated loved ones as a reason to strike jurors from panels involving Black defendants.

Rosenblum also argued he was striking a white woman from the alternate juror pool for the same reason.

First Assistant U.S. Attorney Carrie Costantin invoked what’s known as a Batson challenge – forcing the defense to provide a race-neutral reason for striking the juror, saying this trial involves a racial component because the accused officers are white and the victim is Black. She also argued the potential juror’s cousin was convicted in 1996, so enough time has passed for the juror to remain impartial.

The accused officers, Christopher Myers and Dustin Boone, are on trial this week for the second time on charges related to the assault of Officer Luther Hall.

The jury includes nine women and three men. There are two women and one man among the alternates.

An all-white jury was seated for their first trial in March, and prosecutors invoked a Batson challenge in that case. That resulted in one Black woman being included among the alternate jurors, and she ultimately was part of the final panel after one of the jurors was dismissed for a personal reason.

In all, five officers were federally indicted on charges related to the assault.

Hall was working undercover as a protester in 2017 following the acquittal of a white St. Louis police officer who had been charged with the murder of a Black man following a pursuit.

Two of the officers accused of assaulting Hall have already pleaded guilty and are awaiting sentencing.

Three went on trial in March, which resulted in an acquittal for one of them and a partial verdict for Myers and a hung jury for Boone.

Myers is still facing a destruction of evidence charge, for allegedly destroying Hall’s cellphone. Hall captured some of the assault on his cellphone, and prosecutors are alleging Myers destroyed it to conceal evidence of the attack.

Boone is again facing a deprivation of civil rights charge, which carries a sentence of up to 10 years in prison.

On Monday, the jury selection process began with 90 potential jurors divided in to three groups.

On Tuesday, Rosenblum said prosecutors moved to strike most of the out-state jurors because the further outside of the city you get, the more “conservative” and “law and order” it is.

He also argued prosecutors moved to strike mostly men from the jury because he believed the mostly male jury favored his client during the first trial.

Opening arguments also began Tuesday, sounding mostly similar to arguments made during the first trial with some exceptions.

Costantin read a series of text messages Boone sent to friends, family and his then girlfriend that included racist, vulgar language. She also said Boone Facetimed with his girlfriend for about an hour while he was working on the night of the assault -- including the time Hall was attacked.

She chuckled with disbelief saying, "Yes, defendant was showing a video stream of all these events as they were occurring."

She then texted Boone four rolling on the floor laughing emojis at about the same time Hall got assaulted.

Costantin said after Boone learned Hall was assaulted, and he was not a protester, he texts his girlfriend: "Nothing about that story to anyone please, not something I'm proud of and not entertaining at all at this point." She responded: "I would never say anything."

Boone's attorney Patrick Kilgore said the text messages lacked context, and he planned to show the jury how his client's statements about what he did that night have been consistent all along.

He said he planned to prove his client wasn't anywhere near Hall when Hall was assaulted by using photographs a newspaper photographer took before and after the assault.

Prosecutors also focused on Myers' text messages, in which he said to friends: "Let's whoop some (expletive)" and "I"m (expletive) fighting protesters."

Rosenblum told the jurors both messages were missing context, "C'mon, that's all they got?"

The first witness for the prosecution also took the stand Tuesday. Officer Lewis Naes testified that he was Hall's partner on the night in question, but got separated from Hall and did not see the assault.

Prosecutors noted how he was not assaulted even though he had two encounters with police while working undercover and that he, too, did not tell them he was an undercover officer. He described a situation in which Black officers put him in handcuffs and their arrest attempt was "perfect."

He said the officers searched his backpack and found his badge and department-issued weapon and that's how they learned he was an officer.

Rosenblum seized on Naes' description of how he approached officers who were about to arrest him, asking him to demonstrate how far his held his hands in the air in a surrender position, and noted how he did not "secret" himself.

Rosenblum argued during the first trial Hall did not show his hands and hid between a utility box and a generator when officers started approaching the area, which justified use-of-force against him.

Hall testified during the first trial he held his phone and cameras in his hands, which were out in front of him.

The trial is expected to last about two weeks, which is the same amount of time the first trial took.