“Everybody’s calling me,” she said Friday. “Everybody wants to meet with me.”

And it’s because she expressed outrage at their decisions to include her city in a 120-day pilot program with St. Louis’ Sixth District.

The program’s existence surfaced during a conference earlier this week called Achieving An American Breakthrough, hosted by the U.S. Conference of Mayors and Verizon.

He added there had been a joint roll call on Oct. 16 between city and county officers and the dialogue started weeks, if not months, before that between the commanders of the respective areas.

5 On Your Side’s Jasmine Payoute reported Thursday that the news led Mayor Austin to fire off a fiery letter to Nierdorff, Page, Barton and St. Louis Mayor Lyda Krewson, which read, in part, “We will not be told what actions will occur in our city without being included in the conversation and provided a seat at the roundtable.” 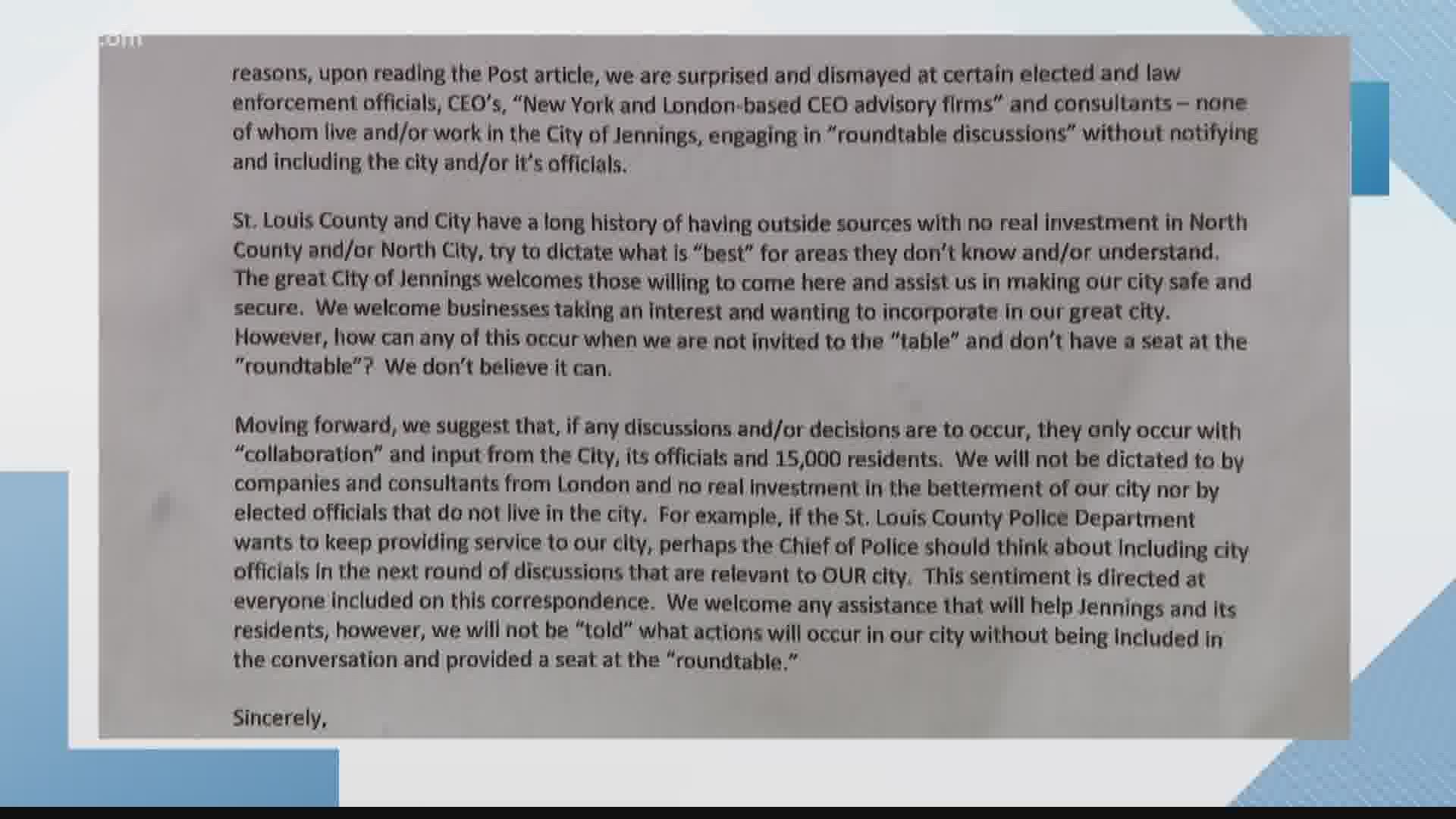 Austin’s phone started ringing as news of her letter spread.

Page sent her a letter Thursday, which Austin considered an apology.

It ended with the line, "We must have the humility to recognize where we fall short and the urgency to do something about it."

It also mentioned that he consulted with Prosecutor Wesley Bell, Judge Ray Price, chairman of the St. Louis County Board of Police Commissioners, and Barton, who assigned Lt. Col. Troy Doyle to provide "essential coordination with the review," according to the letter.

The mention of Doyle's name caught the attention of his attorney, Jerome Dobson. Doyle filed a lawsuit against Page earlier this year alleging he wasn't chosen to become the next police chief because he is Black.

By Friday, she had meetings scheduled with some of the most powerful people in the region.

“That was quick wasn’t it?” she quipped.

For their part, Centene officials wrote a statement, which read in part, “We know that the mayor has expressed her desire to see safer streets in Jennings and our region and we applaud and share that goal. We look forward to sharing more information on this police review once complete. We want to remind everyone that we have one motive that we hope everyone shares: a safer community for all residents, men women and children.”

Punch was the lone opposition vote on a Centene-led study of the county police department proposed earlier this summer. Punch said the study had been negotiated with Page and Centene leaders behind closed doors.

The St. Louis County Police Association is fired up, too.

But the real purpose of the study now looks to be a revival of a plan to combine the city and county police departments.

“We support information sharing, which has always gone on, but we are the county police department and they are the city police department, and the residents of those two areas do not want their police force used to patrol the other areas,” Crecelius said.

Crecelius believes Centene has been angling to combine the police departments for years.

But Centene has since hired him.

“Sam Page sold the police department,” Crecelius said. “When in the history of government has a private company been given such unfettered access to the police department and it just so happens they’ve made hundreds of thousands of dollars in campaign donations to the county executive?”

Page’s spokesman Doug Moore has denied Centene has any influence because of its campaign donations to his boss.

Austin isn’t ready to go that far with her criticisms.

She said for now, she believes Page and Centene leaders have seen the error of their ways.

She noted she spent 31 years as an educator for Saint Louis Public Schools.

“My background as an educator and a principal with SLPS gives me a different outlook on leadership and working together,” she said. “They recognize things should have been done a little differently and they are correcting it.

“I believe they see where things went wrong and we are now working together for the betterment of our city. It’s a start. We’ll see what comes out of that.”