Lt. Cynthia Golden retired in 2003 after 30 years of service and thanked Chief Mary Barton for her friendship 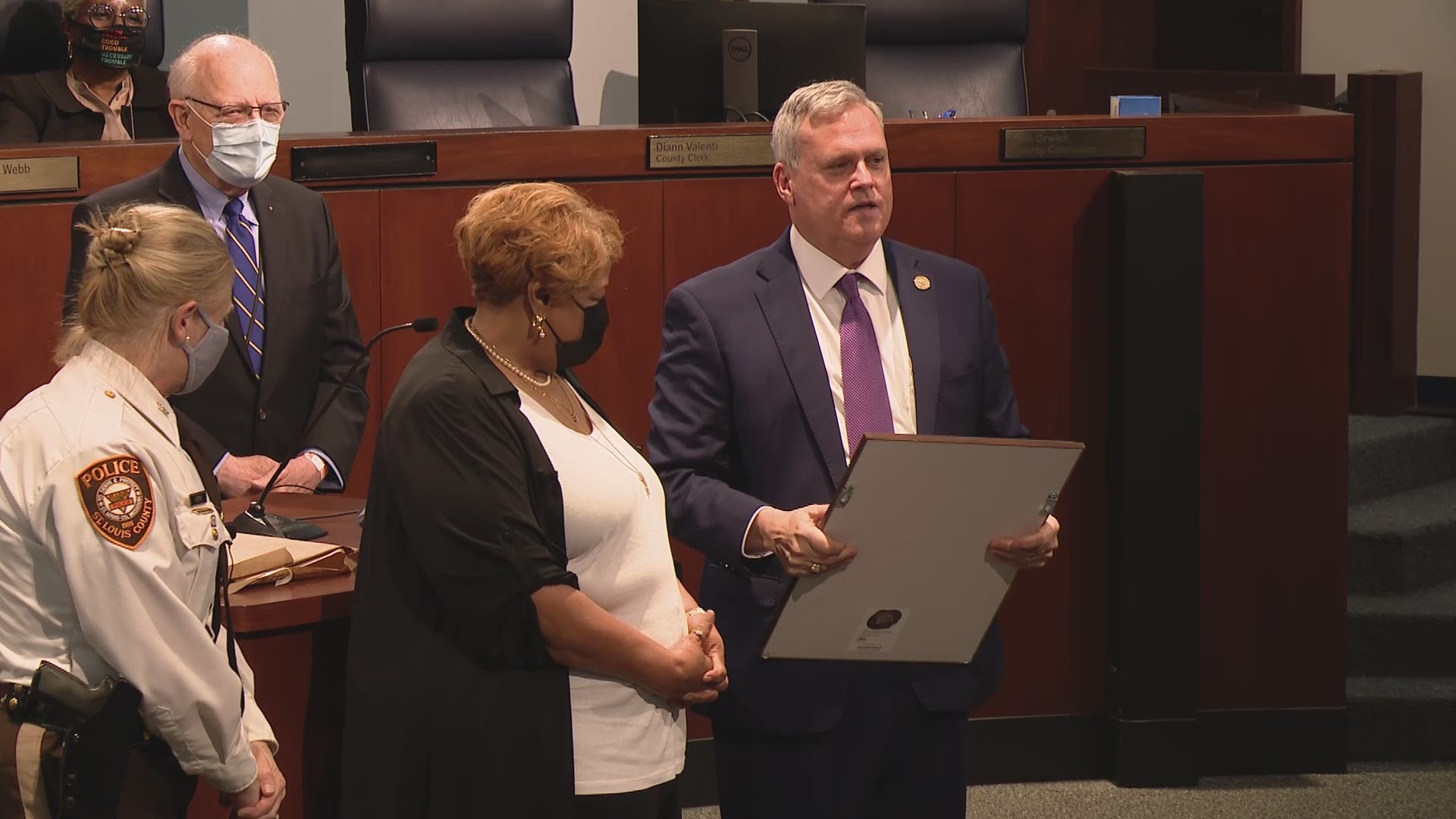 ST. LOUIS COUNTY, Mo. — When Cynthia Golden joined the St. Louis County Police Department in October 1972, she didn’t have a driver’s license and she couldn’t shoot a gun.

Her husband, Walter “Coach” Smallwood, stood up during a recent presentation to honor her service as the county’s first Black woman on the force to emphasize the point.

“She’s probably the only police officer ever hired without a driver’s license,” he quipped.

Golden, 71, went on to say how much the white men on the force surrounded her with support – not letting her skin color, her lack of a driver’s license, or her inability to shoot stand in the way of her career as a police officer.

“I would be remiss if I didn’t recognize I had a lot of growing up to do as a police officer, but these men who were all white, were determined I would succeed,” she said. “You have to see the whole picture.

“These men were determined I would be successful, and behind them was the chief of police.”

Standing beside Golden as she spoke Wednesday during the Board of Police Commissioners meeting was the current Chief Mary Barton – who has come under fire from the Ethical Society of Police for her handling of racial issues during her first year at the helm of the department.

And sitting in the back of the room was Officer Shanette Hall, who has been one of the most outspoken critics of Barton’s leadership.

Hall is a board member of the Ethical Society, a membership organization that represents primarily Black officers.

Barton’s administration recently transferred Hall out of the recruitment division and back onto the streets.

The Ethical Society said the move was retaliation for Hall’s recent interview with national media outlets talking about the racism Black officers face in her department.

Barton insists the transfer was based on the needs of the department.

The group along with the County Council passed no confidence votes in Barton following the transfer, citing a running list of concerns about Barton’s leadership.

St. Louis County Police Association leaders have said they share some of the concerns including retaliatory transfers and are surveying their 915 members to see how Barton’s administration is contributing to low morale.

Golden had so many transfers during her career, she lost count.

County Councilman Tim Fitch – also the former police chief – paused to emphasize the point while reading the resolution the County Council passed in her honor as he read off the numerous units she served.

Precinct Representative to the chief.

Sergeant in the West County and Affton precincts.

Lieutenant in the North County precinct.

“How many transfers was that?” Fitch said.

“A lot,” she said with a chuckle. “But it amounted to a lot of experience and my being able to help other officers when you have that broad of a realm of experience.”

“Absolutely,” Fitch said before continuing on with her list of accomplishments.

She was the first woman to go out on solo patrols, and among the first Black women to graduate from the FBI National Academy.

She got multiple commendation letters as well as letters thanking her for her service from the community.

“There was always somebody looking out for me, I didn’t know it at the time, but if I had a problem with someone, I would ask them if I could talk to them, we shut the door and we went at it,” Golden said. “I think that should be known.

“I know there were problems in the world, but they weren’t mine.”

Golden then turned to shake hands with the members of the Board of Police Commissioners.

County Council chairwoman Rita Days had sat down beside them.

Golden shook her hand, too.

Days was among the council members who voted no confidence in Barton.

In a 15-minute interview with me Thursday, Barton called the Council members who voted against her "unprofessional" for airing their concerns publicly instead of coming to her directly.

Barton also addressed the crowd gathered for Golden's moment Wednesday, recalling how she and Golden manned the First Precinct after Sgt. Rick Weinhold was killed in the line of duty so his fellow officers could attend his funeral.

“I’ve never met a person with more grace, more courage under pressure, she’s probably one of the most moral and ethical people I have ever met and I hope in my life I can achieve the grace and integrity and presence of mind you have always demonstrated,” Barton said. “You are a force to be reckoned with and you always will be.

“I’m proud to call you my friend.”

“Right back at you,” Golden said before the two shared a tearful embrace.

“This is a very, very smart woman,” Golden said. “When I said I used her mind a lot, with God as my witness, I did.”