The memo argues he should be sentenced to 3-4 years in prison. 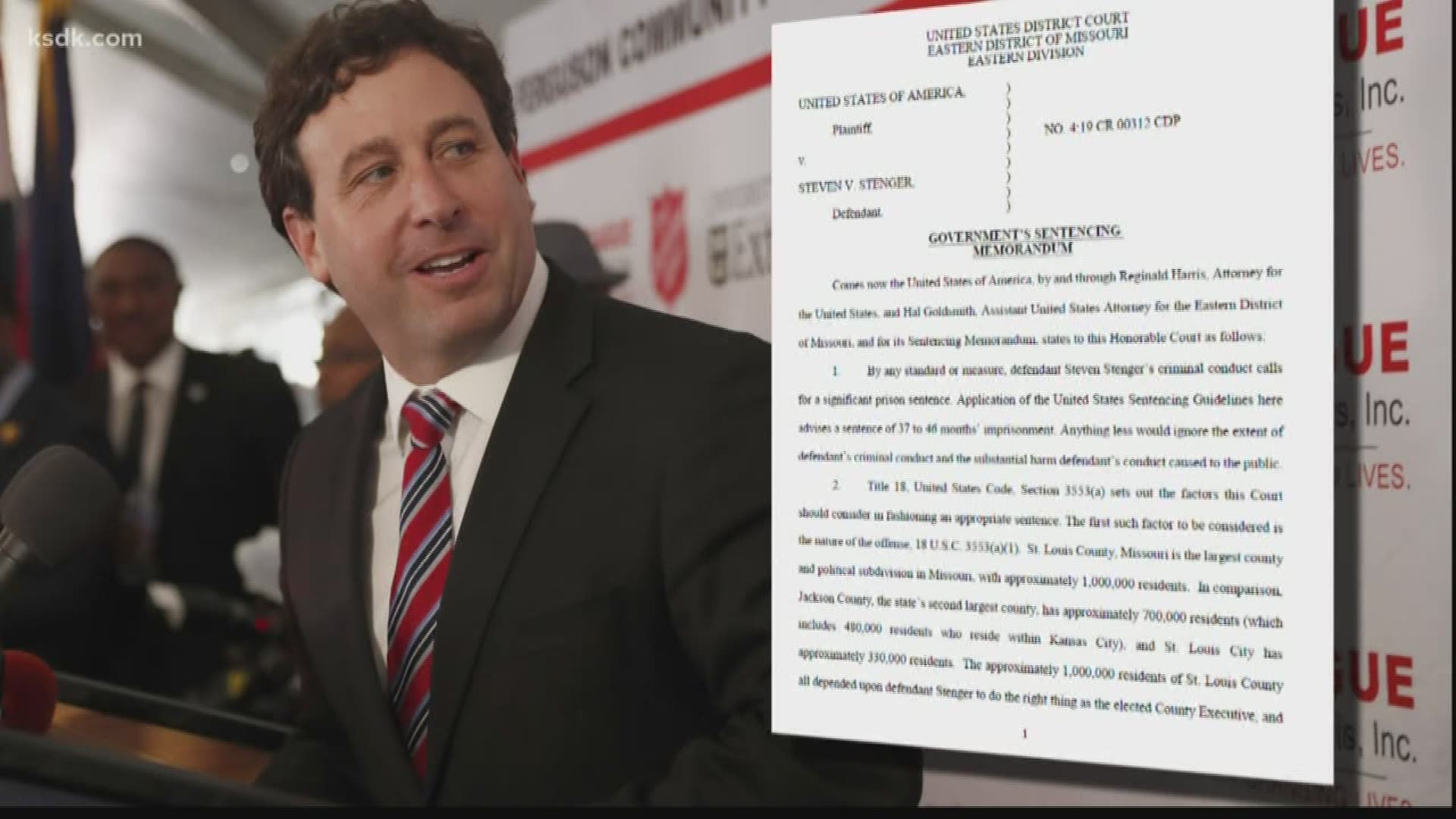 ST. LOUIS COUNTY, Mo. — In a 12-page sentencing memorandum filed on Friday, federal prosecutors said that no leniency should be used in the upcoming sentencing hearing for former St. Louis County Executive Steve Stenger, who pleaded guilty to federal corruption charges in May.

The memorandum said that following sentencing guidelines, Stenger should get 37 to 46 months of imprisonment and "anything less would ignore the extent of the defendant's criminal conduct and the substantial harm defendant's conduct caused to the public."

The document said Stenger used his position for his own personal gain, collecting hundreds of thousands of dollars in political donations for his own benefit, hiring his "political cronies" and their family members to continue his pay-to-play scheme, and bullying his employees into committing illegal acts under the threat of being fired.

The memorandum included several uncovered quotes from Stenger, including what he had told his executive staff in a private conversation on Nov. 7 after the general election: “How ‘bout that motherf---ers? I don’t show up to the Council meetings. I don’t do f---ing sh-t. I’ve been sitting at my house for the past two months f---ing raising money and then won by 20%! The world’s a f---ed up place.”

It also accused Stenger of promoting the Better Together merger plan with the ulterior motive of eliminating the St. Louis County Council, which he had bumped heads with for months, quoting what Stenger told his executive staff privately, also on Nov. 7:

"The only thing that's really going to kill these guys [St. Louis County Council Members] is what's coming in 2020. I'm telling you, we all need to embrace the f--- out of this. Embrace it. I mean embrace it. We've got to pray that we pass this f---in g thing.... This answers a lot of our f---ing problems. Who wants to do another term with these people. I'd rather wipe them out."

Prosecutors say Better Together backer Rex Sinquefield contributed $700,000 to Stenger's campaign. Prosecutors allege that, in order to weave himself tighter into the Better Together plan, Stenger hired the husband of Sinquefield's chief of staff in a move he said was an "insurance policy."

A letter signed by several county council members, included in the court filing, claims Stenger didn't do much work at the office unless the deals benefited him personally. They say he a ran the place like a "fraternity house."

"When he did come to work, he...would immediately close the door and spend much of the day playing video games..." it says.

Stenger's sentencing hearing is on Aug. 9.

RELATED: Steve Stenger wants to pay $130,000 in restitution before sentencing