The officer struck was transported to a nearby hospital and is listed in critical condition. He was wearing a bullet-proof vest at the time of the incident. 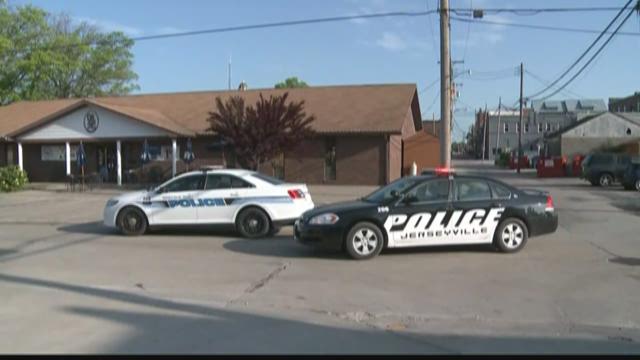 A Jerseyville, Ill. police officer was listed in critical but stable condition after a burglary suspect shot him early Tuesday morning. The officer fired back, killing the suspect.

The officer has been identified as 30-year-old Nathan Miller. He has been with the department since 2014. Before that, he served as a St. Louis City police officer.

"He's a great police officer, we've never had any incident with him like this, or any other kind of incident," said Chief Brad Blackorby.

The incident began just after 1 a.m. when police got a call about a burglary at DJ's Bar and Grill. When officers arrived, they saw a suspect, identified as Austin M. Durham, race out of the business. Two Jerseyville officers and one Jersey County deputy ran after the suspect for several blocks. Then, between two houses, police say Durham turned and fired, hitting Miller twice. Miller fired back. Durham was transported to the hospital, where he died.

5 On Your Side learned this was just the latest in a string of burglaries to hit this quiet town. Since Sunday, at least four other businesses were burglarized, with a similar modus operandi. Police are now investigating whether the crimes are related.

"It makes you think, be a little more cautious and open to what's around you at all times,” says Patrick Russell. His business, Total Lawn Care, was victimized early Monday morning.

Resident Jane Shain added, "This town is really changing, it's our family town and I don't know. We respect and think a lot of our policemen here, and I can't believe this happened."

The owner of DJ's didn't want to speak on camera, but said she was deeply disturbed by what happened.

Miller was transported to a nearby hospital and is listed in critical condition. He was wearing a bullet-proof vest at the time of the incident.

Durham was transported to the Jerseyville hospital where he was pronounced dead.