1 officer found guilty for role in assault of undercover colleague, hung jury on other 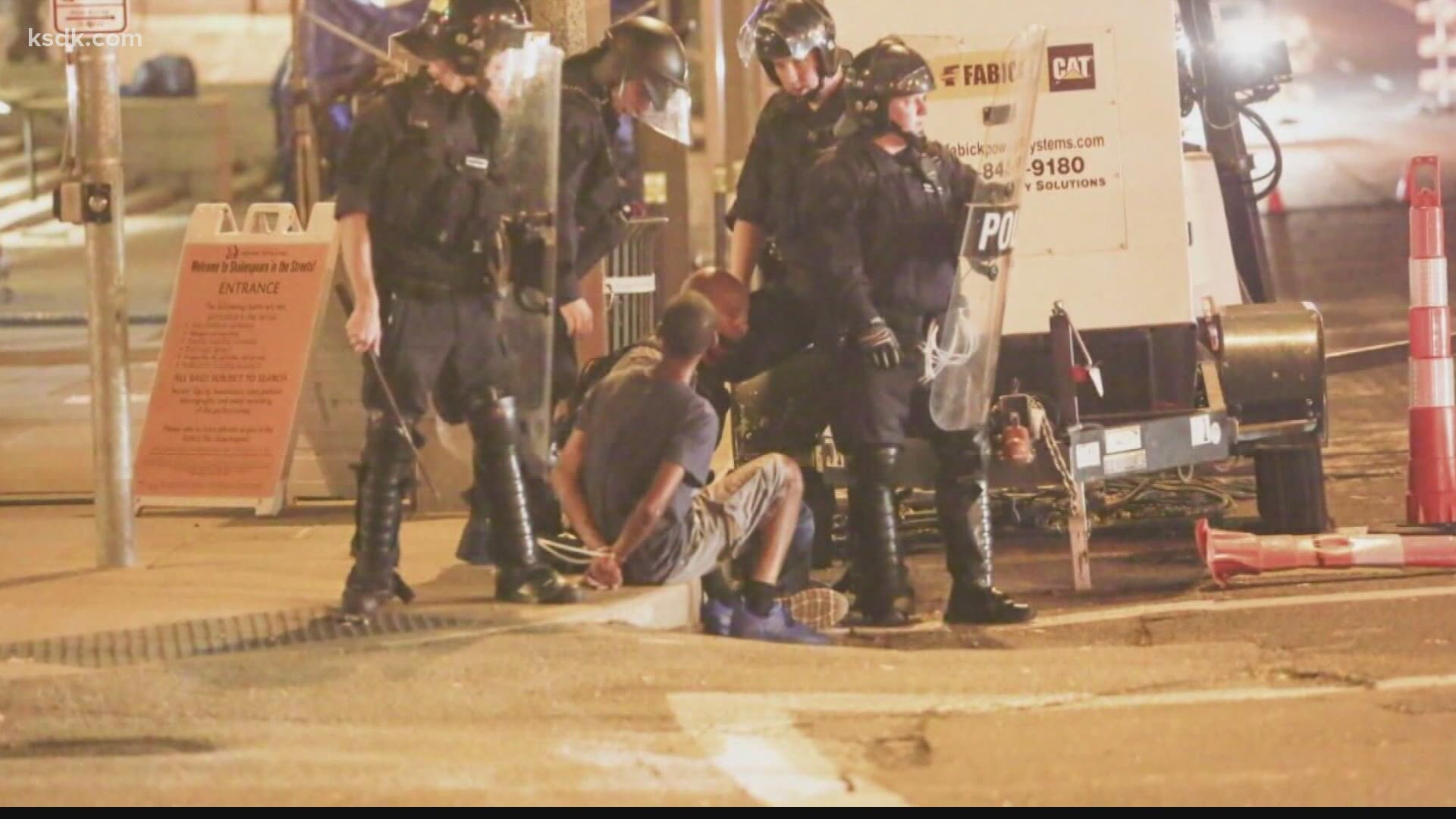 ST. LOUIS — A second trial for two former St. Louis officers accused of assaulting one of their own who was working undercover as a protester ended Thursday in a conviction for one of the officers and another mistrial for the other.

This time, the jury found Dustin Boone guilty of aiding and abetting the deprivation of Officer Luther Hall’s civil rights, which carries a sentence of up to 10 years in prison.

A second mistrial was declared in the case of Christopher Myers, who was charged with destroying evidence to impede an investigation.

First Assistant U.S. Attorney Carrie Costantin said a decision on whether to retry Myers for a third time has not been made, and the feds will talk to Hall to gauge his opinion. She said the government is "gratified" with the jury's verdict.

"I said in my closing argument that no one hates a bad cop more than a good cop and for those of us in law enforcement it's gratifying when we can take a bad cop off the street," she said.

Boone and his attorney, Patrick Kilgore, left the courthouse without speaking to reporters.

Myers did not talk to reporters, but stood with his attorney, Scott Rosenblum, on the courthouse steps following the verdict.

"I'd be surprised if they make Chris go through a third trial, I think at that point it becomes particularly inappropriate," he said. "I'm happy he wasn't convicted, he gets to go home to his family, he has no convictions on his record and we're happy about that, but I still don't think the evidence was there, never have, never will."

Rosenblum said the process has taken a toll on his client.

"He was a young police officer, he never dreamed he would be in this situation, he's been living under the specter of this for three years now and it's weighing and it's heavy and it's very difficult to live your life with this Domacles over your head."

A sentencing date was not set for Boone Thursday, but usually happens eight to 12 weeks after a verdict. He is facing up to 10 years in prison.

Two other former officers, Bailey Colletta and Randy Hays, are expected to be sentenced in July.

A fifth officer was acquitted during a trial in March.

All were accused of assaulting Detective Luther Hall, who was working undercover as a protester in September 2017. Protesters flooded the streets of downtown St. Louis after a judge acquitted a former white St. Louis Officer Jason Stockley of the murder of a Black drug suspect during a police shooting.

Hall was assigned to blend in with the protesters to document property damage or any other crimes with his camera and cellphone.

When officers moved in to arrest him following a dispersal order, Hall suffered a lacerated lip, abrasions to his elbow and ear, a jaw injury that left him unable to eat as well as injuries that required two surgeries to his spine to repair.

Federal prosecutors argued Hall’s cellphone video captured Myers striking the phone with an asp — which is a type of police baton — and text messages Boone sent to family and friends showed he is a racist, who admitted to assaulting other people he had arrested and talked about his desire to assault protesters.

He also sent a lengthy text message to Hall apologizing for his conduct.

Thursday's decision came after some confusing moments and multiple jury notes that began around 12:30 p.m. Thursday when the jury said it could not reach a unanimous decision on either defendant.

Senior United States District Judge E. Richard Webber then delivered the Allen law, or hammer instruction as it's more commonly known, to the jury. The law pleads with jurors to try again to reach a verdict, reminding them that a trial is costly and no one is more informed about the facts of the case than they are at this point.

Webber, who was appointed as a federal judge by former President Bill Clinton, said he has never had to deliver a hammer instruction during his career.

It reads, in part: "In a large proportion of cases absolute certainty could not be expected" but the verdict must be the verdict of each individual juror.

Almost two hours later, the jury sent another note, this time asking for clarification on a jury instruction regarding Boone.

Before the judge could even answer the question, the jury sent another note saying it had reached a decision on Boone, but was deadlocked about Myers.

The judge sent the response explaining the jury instruction to the jury about Boone's charges.

Another hour-and-a-half passed and the jury sent another note saying it still could not reach a decision on Myers.

He then sent his clerk to get clarification from the jury as to whether they were still considering the jury instruction on Boone and learned they had not wavered in their decision about Boone or Myers.

Tears welled in Boone's eyes as the judge read the verdict against him, and his parents, wife and family wept.

Rosenblum says in the 450 jury trials he has tried, he has seen a jury come back with a verdict after being given a hammer instruction but it's rare and he's not sure he's ever seen it work in federal court

Federal prosecutors balked when the all-white jury was first seated, saying this case has racial undertones to it. Hall is Black. Myers and Boone are white.

But defense attorneys successfully argued they had race-neutral reasons to dismiss the only Black man who made it to the final jury pool.

Following the first trial, which took two weeks in March, a jury acquitted Myers of the deprivation of civil rights charge, but hung on whether he destroyed Hall's cellphone to impede an investigation.

That jury hung on whether Boone deprived Hall of his civil rights.

Costantin said a key difference between the trials was the absence of former Officer Randy Hays on the stand.

In the first trial, Hays changed some of his testimony.

"Just looking at the over all, how the first trial went, how we felt that the evidence was presented better during this trial, it was a decision made during trial," Costantin said.

Costantin said she believed the verdict sent a message to police officers.

What this is saying is we need to take those outliers off the force. Those are the people who should not be police officers -- people who are abusing their power and abusing their authority."

“As a police officer for the City of St. Louis, Dustin Boone violated the sacred trust placed in him to serve and protect members of the community,” Fleming wrote. “Our hope is this conviction serves as a deterrent to those who consider abusing their authority and a step toward restoring the community’s faith in the justice system and law enforcement.”

Quinn wrote: “Law enforcement officers must obey the law as well as enforce it. Those who violate their oaths do a disservice to the communities they are sworn to protect and serve.”