'No regard for life' | Florida police say suspected St. Louis cop killer was trying to leave the country

Thomas Kinworthy, 43, has not yet been charged for the murder of St. Louis Officer Tamarris Bohannon but the Ethical Society of Police identified him as the suspect 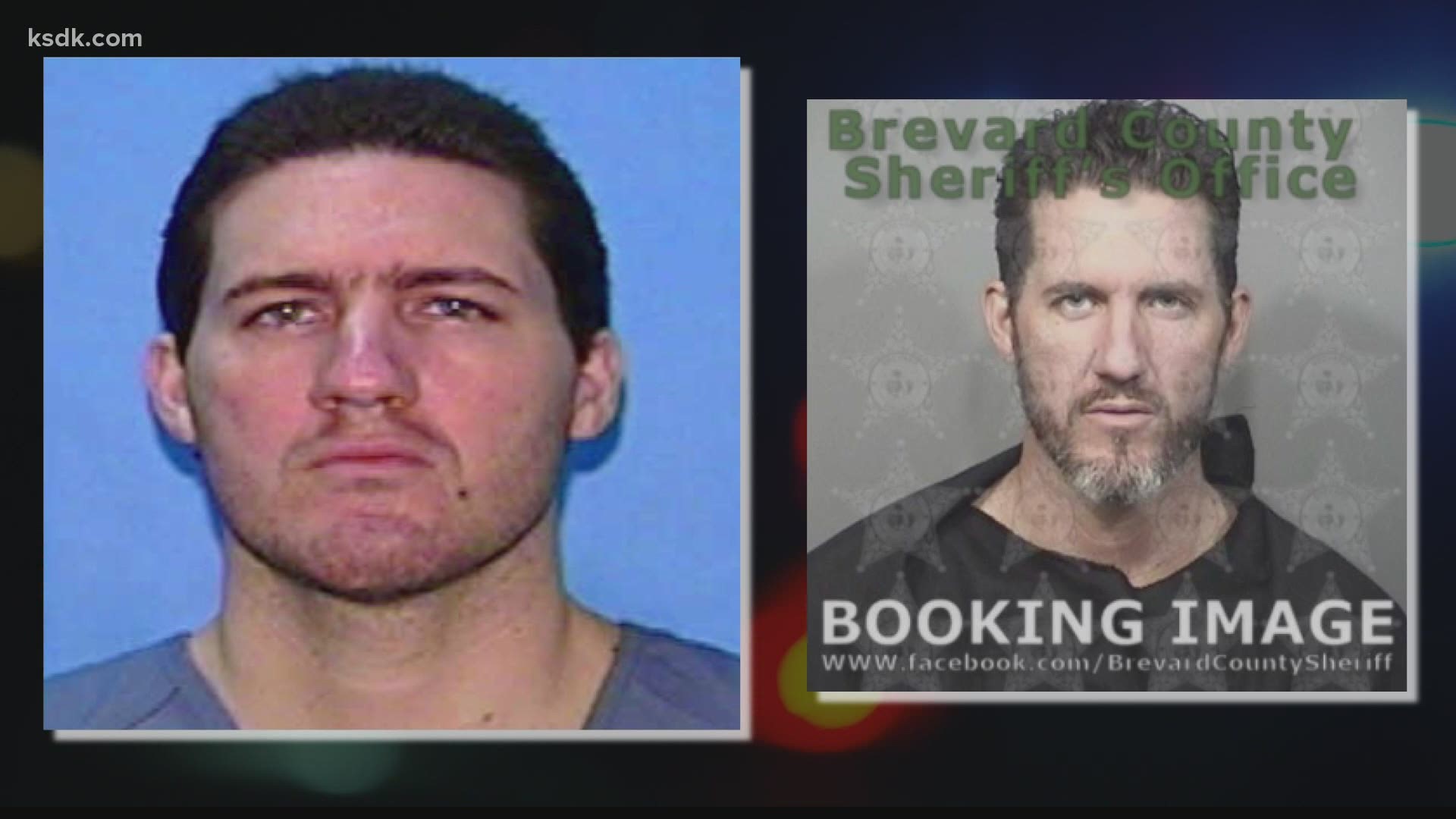 ST. LOUIS — Somebody had to stop Thomas Kinworthy.

And, on Saturday, police believe that somebody was St. Louis Police Officer Tamarris Bohannon.

According to court records, 43-year-old Kinworthy had already served time for shooting a man during a road rage incident in Florida.

He had a domestic violence incident involving his wife and children in 2019.
He started off this year with an arrest and sexual assault charges in Florida.
Weeks after that, police busted him with an arsenal of weapons inside his car.
He missed his court date Aug. 19, and police believe he was trying to leave the country.

Now, Brevard County Sheriff’s Department spokesman Officer Tod Goodyear said he and his fellow officers in Florida hope Kinworthy won’t hurt anyone ever again after the ultimate sacrifice Bohannon made Saturday when he responded to a call that Kinworthy had hurt someone again.

Bohannon, 29, died from his injuries Sunday. He was a father of three children, two sons and a daughter all younger than 10.

RELATED: 'He will be deeply missed' | St. Louis police officer shot in head Saturday dies from his injuries

“He has no regard for life, for other people, and hopefully this will be his last stop and he will not be allowed out to hurt anybody again,” Goodyear said.

5 On Your Side does not typically identify suspects in crimes until they are charged. However, because the Ethical Society of Police – a membership organization for primarily Black police officers – publicly identified him Monday and Kinworthy faces charges of violence in another state, 5 On Your Side is naming him.

In 1995, he pleaded guilty to his first felony, which was drug possession in Florissant. He was sentenced to three years of probation, which he violated about a year later, and served two years in prison.

In 1998, he was charged with unlawful use of drug paraphernalia in Callaway County. He pleaded guilty and was sentenced to 15 days in jail with a diversion program.

Six months later, at age 21, he was charged with two counts of attempted second-degree murder, aggravated battery, and other firearm/vehicle offenses after police in Brevard County, Florida, said he and another Missouri fugitive shot a man in a road rage incident, according to the Orlando Sentinel.

The newspaper reported Kinworthy was wanted for a robbery at the time, and his accomplice was wanted for a killing. The 21-year-old victim told police he was stopped at a red light when a man in a Pontiac Sunfire started making fun of his late model Ford Mustang.

Kinworthy escaped a police roadblock and the intense manhunt but got arrested for failing to pay the cab driver, according to the newspaper.

He was sentenced to 10 years in prison for the shooting, which left the man without three of his fingers, according to court records.

But he only served six.

He was charged with a dog attack in 2007 in Brevard County and fined $220, most of which he did not pay.

In August 2019, police said he dragged a man out of his girlfriend’s bedroom and into the kitchen, tied his hands behind his back and kept his head down threatening to kill him. He was wearing a mask, but the man told police he recognized Kinworthy’s voice, and he then took off his mask, sexually assaulted him, beat him and let him leave only after he begged for his life.

In December, he was involved in a domestic violence incident involving his wife and their children. He had filed for divorce in September, court documents said.

In January, Brevard County Sheriff’s deputies got search warrants for Kinworthy’s DNA as well as his car. In plain view, officers saw five rifles, two pistols, a bullet-resistant vest and numerous rounds of ammunition, according to court documents.

Once inside the car, they also found a black tactical backpack, a two-piece mask, and thousands of rounds of ammunition.

He texted a gun dealer he bought weapons from, “They got the car and all of my tools,” according to the search warrant. The dealer told police Kinworthy referred to his guns as his “tools.”

He told the dealer he had to close the storage unit where he was keeping his arsenal, so he put everything in his car.

The dealer told police he didn’t know Kinworthy was a convicted felon.

Goodyear told 5 On Your Side’s PJ Randawa about the search of Kinworthy’s car.

“Obviously this guy is a gun aficionado,” Goodyear said. “He likes guns, he had multiple types of weapons, handguns, long guns, he’s obviously been around firearms for a long time and has some proficiency with them.”

He failed to appear for his Aug. 19 court date on the gun charges, Goodyear said.

Kinworthy has friends and family members in the St. Louis area, but his connection to the Tower Grove neighborhood where the shooting took place remains unclear.

“Our agents had a feeling he was trying to leave the country,” Goodyear said.

Police say shortly before 6 p.m. Saturday, Kinworthy shot at a homeless man in the Tower Grove neighborhood, and then broke into a home and ordered the couple who lives there out at gunpoint.

Officer Bohannon was the first to respond to the call for a shooting, and Kinworthy shot him in the head.

Sources familiar with the investigation tell 5 On Your Side he then took up a higher position in the house and fired upon officers who had rushed to Bohannon’s aide as they tried to move him away from the scene. One officer was shot in the leg, but has been released from the hospital.

St. Louis investigators believe Kinworthy intentionally lured police to the scene by shooting at the homeless man. The homeless man has not yet been found, but police did find a shopping cart in the alley that looks like it belongs to a homeless person, sources tell 5 On Your Side.

Knowing his affection for guns, Goodyear said Kinworthy knew what he was doing.

“He may have been one of those guys who likes to train,” he said. “He knows to take higher position for a better view to have a chance to take a long-range shot if he wanted to.

“He’s a person that unfortunately shouldn’t have been out, and the system failed in some manner. This person, who had these serious charges, was allowed to not be in jail until he faced them and was allowed to be on the street and because of that, he left town to evade our charges, went to St. Louis and unfortunately took the life of another person. And, in this case, another one of our brothers, a police officer.” 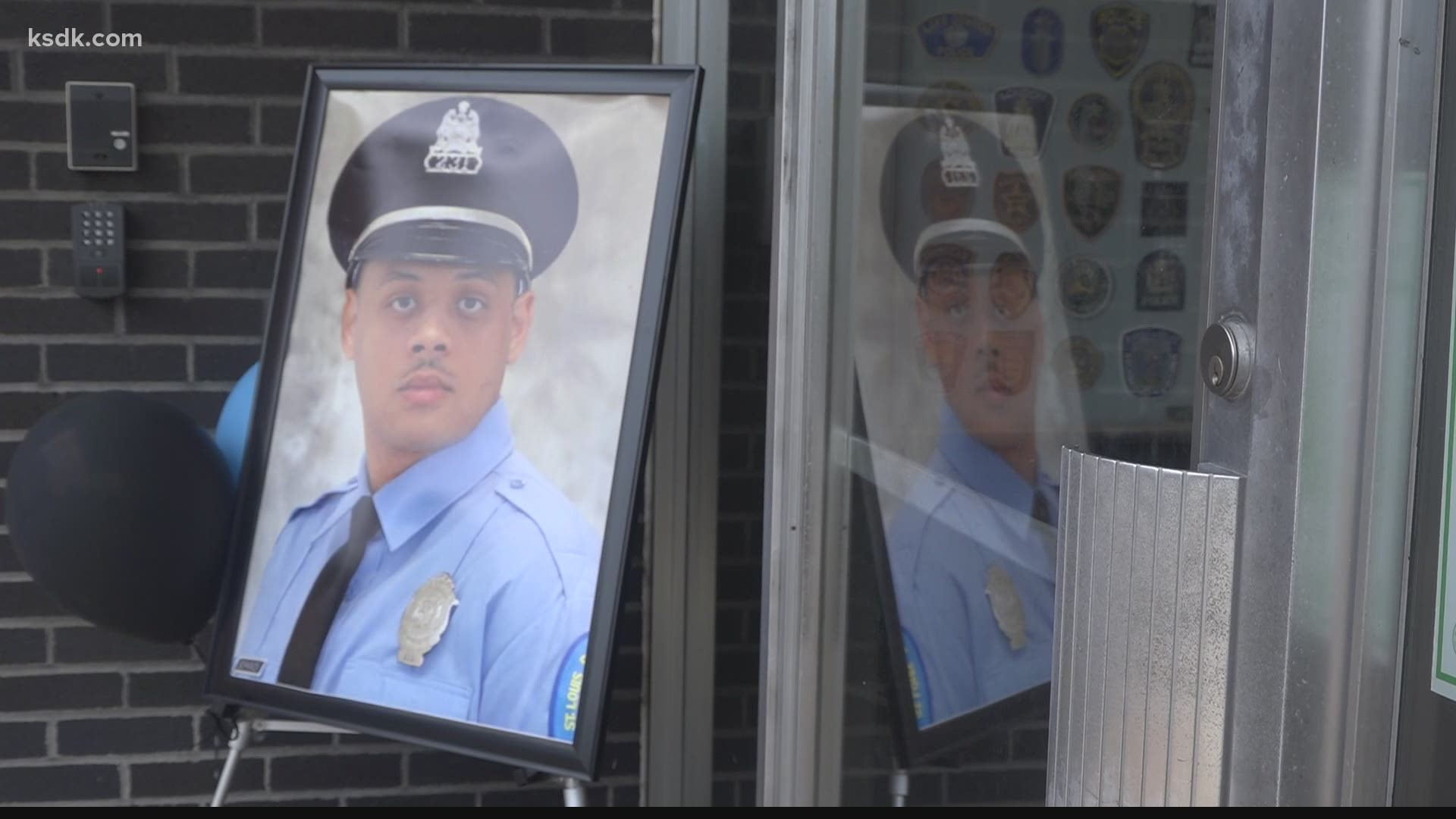