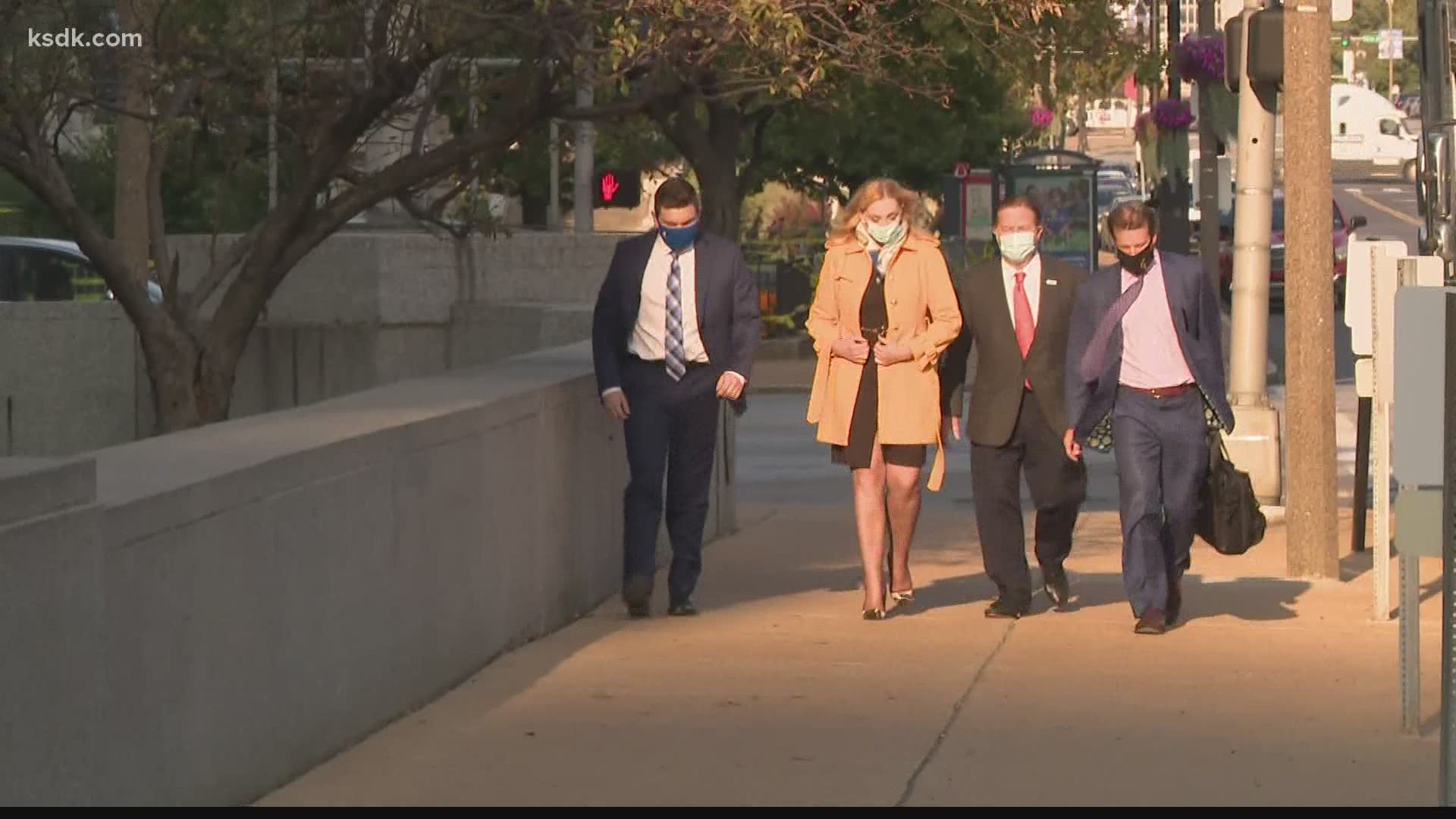 ST. LOUIS — A St. Louis couple who aimed guns toward protesters and were later charged in the incident briefly appeared in court again Tuesday.

Mark and Patricia McCloskey each had hearings Tuesday morning regarding charges of unlawful use of a weapon. The charge is a class E felony, which can carry a sentence of up to four years in prison and a fine of $10,000.

5 On Your Side's Christine Byers was inside the courtroom for the McCloskeys' hearings. She reported their hearings were postponed to Oct. 14.

While walking out of the courtroom Tuesday morning, the McCloskeys and their lawyer stopped to talk to reporters gathered outside.

Mark McCloskey said he and his wife are victims of “violent” trespassers who were shouting death threats and threats of rape against his wife.

He blamed the "left, Democrat government" of the city for the charges and said he and his wife were "doing no more than exercising our Second Amendment rights."

Listen to the full interview with the McCloskeys after their Tuesday court appearance in the video below.

Sources tell 5 On Your Side the grand jury has met at least once on this case and has not yet made a decision on whether the couple should be indicted. Grand jurors heard testimony from several witnesses, including protesters whose trespassing charges were dismissed by attorneys for the city.

"If there is a true bill returned for either Mr. or Mrs. McCloskey we will do everything we can to fight those charges," the couple's lawyer Joel Schwartz told reporters after the court appearance Tuesday. He expects a decision by the grand jury to be made by the couple's court appearance next week.

One person St. Louis Circuit Attorney Kim Gardner has not subpoenaed to appear in court is Sgt. Curtis Burgdorf, who is the lead detective on the case. 5 On Your Side reported tension between him and Gardner’s assistant circuit attorney Chris Hinckley leading up to the charges.

RELATED: St. Louis prosecutor to detective on McCloskey case: 'I suggest you quickly reassess this evidence'

The unlawful use of a weapon charges filed against the McCloskeys stem from the June 28 incident outside their Central West End home. The couple confronted protesters with a rifle and a gun. Nearly a month later, Gardner filed charges against the couple.

In a statement announcing the charges, Gardner said the McCloskeys waved their weapons in a "threatening manner" at "peaceful, unarmed protesters."

The McCloskeys first appeared in court on Aug. 31; the judge continued their cases to Oct. 6. At the time, the couple’s attorney sent a one-line statement regarding their first court date.

"We are looking forward to having these allegations litigated in a courtroom," Schwartz said in an email.

“The right to keep and bear arms is given the highest level of protection in our constitution and our laws, including the Castle Doctrine. This provides broad rights to Missourians who are protecting their property and lives from those who wish to do them harm,” said Schmitt.

Mark McCloskey defended their actions the day after the incident in an interview with 5 On Your Side.

Latest coverage on this case: