Williams said she is sharing her story to spare other parents the grief and anxiety she felt, watching a stranger drive off with her baby. 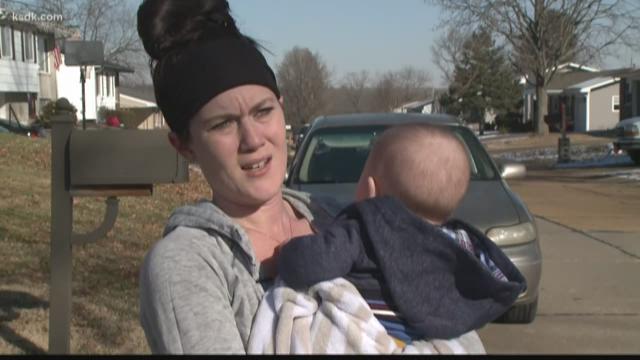 ST. LOUIS – D'Anna Williams is holding her son a little tighter these days after nearly losing him on Christmas Day.

“He's my child. He's literally the only thing I've got,” Williams said.

Williams said she had spent the night at a friend's home and stopped by her apartment on Spring Ave. the next morning because she had forgotten to lock her door.

She parked on the street, leaving six-month-old son Aniken in an infant seat inside the car. Williams walked up to her door. When her back was turned, she heard a car door slam.

“When I turned around and saw a figure in my front seat,” Williams said.

Williams ran down the street, chasing her car.

“Every negative thing was running through my head,” Williams said. “What if I never see him again. What if he hurts him.”

Williams called St. Louis Police to report what happened. Minutes later, police received another call; baby Aniken had been dropped off on the front porch of a home two miles away. Williams said she is grateful to the family who watched over her son.

“I don't know if they understand, but they protected him at that point. They took him in their home, they held him.”

The suspect, 16, abandoned Williams' car. Police chased him on foot and arrested him. The teen faces charges of kidnapping, endangering the welfare of a child and motor vehicle theft.

Williams said she is sharing her story to spare other parents the grief and anxiety she felt, watching a stranger drive off with her baby.

“It's not worth it. Don't leave your children in your car,” Williams said. “It was scary. I didn't know if I was ever going to see my kid again.”