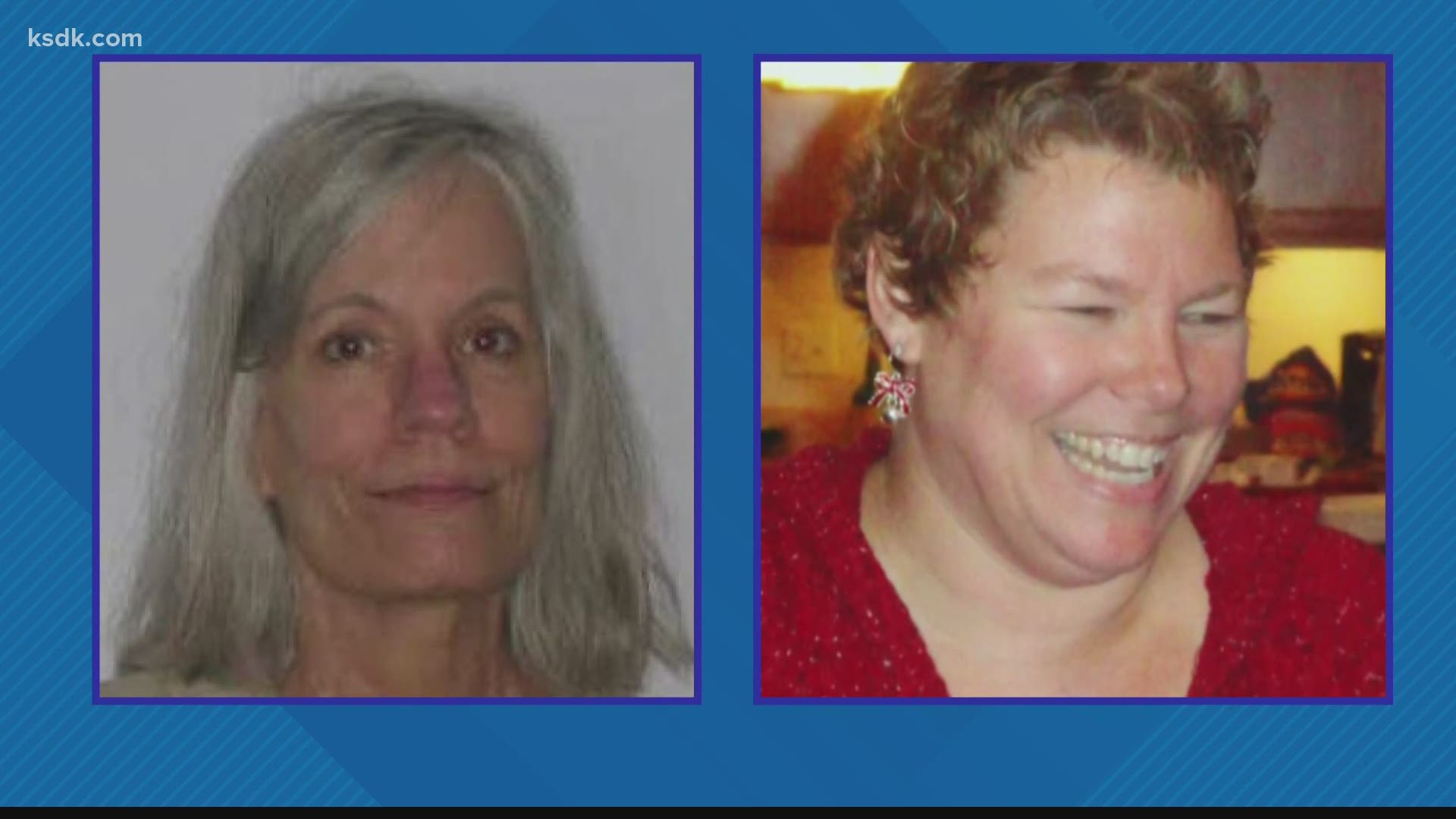 LINCOLN COUNTY, Mo. — Pam Hupp waited until her friend Betsy Faria was weak and lethargic from a chemotherapy treatment before she began stabbing her repeatedly as she lay on a couch under a blanket. Then, she dipped the victim's socks in her own blood and spread it around the house to make it look like her husband killed her in a domestic assault, according to court documents filed Monday charging Hupp with the 2011 murder.

Among the many oddities prosecutors noted about the crime scene was Betsy Faria's dog, who had been left outside when her husband returned home that night. Hupp was afraid of the dog, and she was the last person to see Betsy Faria alive, according to the court documents outlining first-degree murder and armed criminal action charges against her.

You can watch the entire news conference in the YouTube video below.

"One of the aggravating factors was she murdered for the insurance money, this case struck very deep into our souls and into our conscience with a level of depravity we haven’t seen before," he said. "She murdered her friend, mutilated the body, staged the scene, testified against an innocent man in court...I can’t pick a case more depraved than that, this is it."

There has long been suspicion that Hupp was involved in Faria's death. Hupp was the last person to see Faria alive before she was stabbed dozens of times and left for dead in her home on Dec. 27, 2011. Hupp became the sole beneficiary of Faria's $150,000 life insurance policy just days before she died.

Hupp is the second person to be charged with murder in this case.

Faria's husband, Russ, was convicted of the crime in 2013 and spent more than a year in prison but was acquitted in a retrial two years later. He agreed to a $2 million settlement from an insurance company for the Lincoln County police officers who investigated the case. The officers did not admit to wrongdoing as a term of the settlement.

"The only way that I can describe Pam Hupp is evil incarnate," Russ Faria said Monday. "Compare her to people like Charles Manson."

Wood said Monday he also plans to investigate whether there was criminal wrongdoing on the part of the investigators and former prosecutors on the case.

"To me it felt as if this was confirmation bias in its purest form, largely driven by ego," he said. "I can confidently say they weren't interested in finding any evidence that would point them in any other direction...

"By the time they got to the second trial, they doubled down because they knew how far they had gotten. They got hit with a $2 million lawsuit and that's not because anybody did a fantastic job."

Hupp is already serving a life sentence for the murder of Louis Gumpenberger in 2016. She entered an Alford plea in the case three years later.

Hupp shot and killed Gumpenberger during a staged home invasion and attempted robbery inside her O'Fallon, Missouri, home, claiming she was acting in self-defense. Prosecutors called it a desperate attempt to try and take attention away from her involvement in Faria's case.

In the summer of 2019, following Hupp's Alford plea, Wood announced he would be reopening the Faria investigation. The Major Case Squad of Greater St. Louis was part of the review.

As part of the Major Case review, all physical evidence was relocated to the St. Charles City Police Department to preserve investigative integrity.

In a letter, Wood said no officers related to any Lincoln County law enforcement agency would be investigating the Faria case.

Shortly after the review was announced, the Lincoln County Sheriff's Office posted online approximately 1,200 pages of Major Case reports and files from the original Faria investigation in the spirit of transparency after renewed attention on the story.

"I think Mr. Gumpenberger and Pam Hupp's mother would still be here today if Lincoln County had done their job properly,” Russ Faria told 5 On Your Side back in 2019.

Court documents filed Monday outline the evidence prosecutors used to issue the charges against her and begin by noting how Hupp was the last person to see Betsy Faria alive.

Hupp told investigators Betsy Faria and her husband Russ Faria were having marital problems, and Betsy Faria wanted Hupp to distribute the life insurance proceeds to the victim’s two daughters and to her mother, Janet Meyer, if she died.

But, prosecutors say, Hupp never gave the money to Betsy Faria’s daughters and later told investigators the money belonged to her.

Following the family’s Christmas holiday, Betsy Faria was scheduled to receive chemotherapy on Tuesday — the day of the murder — for the reoccurrence of her breast cancer.

“Despite being told repeatedly by Betsy that she did not wish to see Hupp that day, Hupp stalked her, all the while offering to transport Betsy to therapy and visits,” according to the documents. “Hupp arrived unannounced and unexpectedly at Janet Meyer’s house in the early morning where Betsy had spent the night.

“Having been told not to come to the chemotherapy treatment, Hupp showed uninvited and unexpected yet again. After chemotherapy, Hupp appeared again at Janet Meyer’s home where Betsy had been playing board games with friends. Hupp insisted on driving Betsy home to Troy, even though transportation was already arranged and despite later claiming she was unfamiliar with the Troy area.”

“Betsy never answered, despite the promise to do so, indicating she was likely already dead or lay dying,” according to the documents. “This is consistent with the body’s deterioration when examined by medical personnel 2 ½ hours later.”

Prosecutors also say Hupp texted Betsy Faria’s phone at 7:20 p.m. that she was now “home,” in “an attempt to establish an alibi that she was away from the residence at the time of the murder.”

But cellphone data showed Hupp’s cellphone was still being tracked by the same cellphone receiver for the Faria home, according to the documents.

Hupp then told investigators she meant to say she was “home free,” meaning she was on roads familiar to her.

Prosecutors say evidence including blood spatter, the position of the victim’s body and other physical evidence found in the den suggests the victim was lying on a sofa covered by a blanket when the attack occurred and was “completely caught off guard.”

“The fact that the victim was lying down when the attack occurred suggests that she knew her killer and felt comfortable enough in their presence to place herself in a vulnerable position,” according to the documents.

Prosecutors also allege Hupp soaked a pair of Betsy Faria’s socks in her own blood and used them to smear blood on the knife and light switch plate and put the socks back onto the victim after she had died.

“Blood stains on the socks resemble impressions of fingers and not toes,” according to the documents. “Investigators believe the killer place the socks on his/her hands after the murder occurred to plant evidence onto the crime scene and then put the socks back on the victim after accomplishing his/her goal.”

Hupp told investigators to do a forensic examination of Betsy Faria’s laptop, which they did, and found a document written by an unknown author on a program that wasn’t installed on Betsy Faria’s computer.

It said Betsy Faria feared her husband would murder her, according to the documents. The document was created and downloaded to Betsy Faria’s laptop the day before the life insurance beneficiary changed to Hupp.

Prosecutors also added Hupp knew Russ Faria would not be home on the day of the murder and chemotherapy treatments made Betsy Faria weak and lethargic. Betsy Faria’s dog was outside when Russ Faria got home and Hupp was afraid of her dog, according to the documents.

“The motive for the murder was money,” according to the documents.

In comments following the press conference, Russ Faria said he believed Hupp did not act alone.

"It's long been my belief that Pam Hupp had accomplices. And I hope that that is brought to light and that they get prosecuted as well," he said.

Hupp’s mother, Shirley Neumann, was found dead in 2013 beneath the balcony of her home in a senior living community near Fenton. In November 2017, the St. Louis County medical examiner changed the manner of Neumann’s death from “accidental” to “undetermined.”

The deaths of Faria and Gumpenburger have been the subject of numerous NBC Dateline investigations, a podcast series and an upcoming TV series, co-produced by NBC News Studios and Blumhouse Television.