The student later admitted to police that he had no intention of following through with his threat, but "was merely seeking attention." 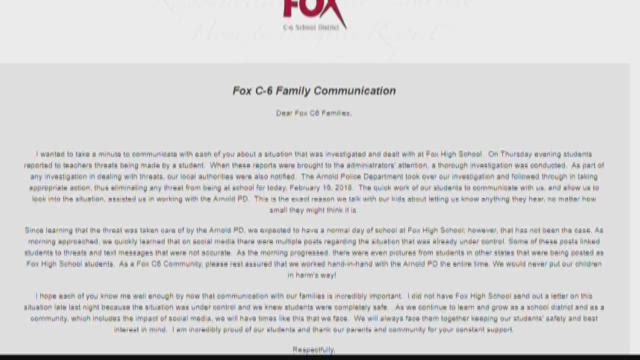 Thursday, the police department was made aware of the threat issued by the student in question. They said the 15-year-old told his classmates they should stay home sick on Tuesday, February 20, because he was going to bring a gun and possible explosives to class.

During their investigation, Arnold police discovered the student's identity and arrested him at his residence. He admitted to police that he had no intention of following through with his threat, but "was merely seeking attention." Police did not find any weapons in relation to the threat.

The student was placed into the custody of the Jefferson County Juvenile Authority for prosecution.

The Arnold Police Department increased their patrols around the area of the school in light of the arrest. In a statement, they said in part, "We take these threats very serious in today's society, especially in the light of the situation that occurred recently in Florida."

Here is the full letter Fox High School released on Friday morning about the threat:

I wanted to take a minute to communicate with each of you about a situation that was investigated and dealt with at Fox High School. On Thursday evening students reported to teachers threats being made by a student. When these reports were brought to the administrators' attention, a thorough investigation was conducted. As part of any investigation in dealing with threats, our local authorities were also notified. The Arnold Police Department took over our investigation and followed through in taking appropriate action, thus eliminating any threat from being at school for today, February 16, 2018. The quick work of our students to communicate with us, and allow us to look into the situation, assisted us in working with the Arnold PD. This is the exact reason we talk with our kids about letting us know anything they hear, no matter how small they might think it is.

Since learning that the threat was taken care of by the Arnold PD, we expected to have a normal day of school at Fox High School; however, that has not been the case. As morning approached, we quickly learned that on social media there were multiple posts regarding the situation that was already under control. Some of these posts linked students to threats and text messages that were not accurate. As the morning progressed, there were even pictures from students in other states that were being posted as Fox High School students. As a Fox C6 Community, please rest assured that we worked hand-in-hand with the Arnold PD the entire time. We would never put our children in harm's way!

I hope each of you know me well enough by now that communication with our families is incredibly important. I did not have Fox High School send out a letter on this situation late last night because the situation was under control and we knew students were completely safe. As we continue to learn and grow as a school district and as a community, which includes the impact of social media, we will have times like this that we face. We will always face them together keeping our students’ safety and best interest in mind. I am incredibly proud of our students and thank our parents and community for your constant support.