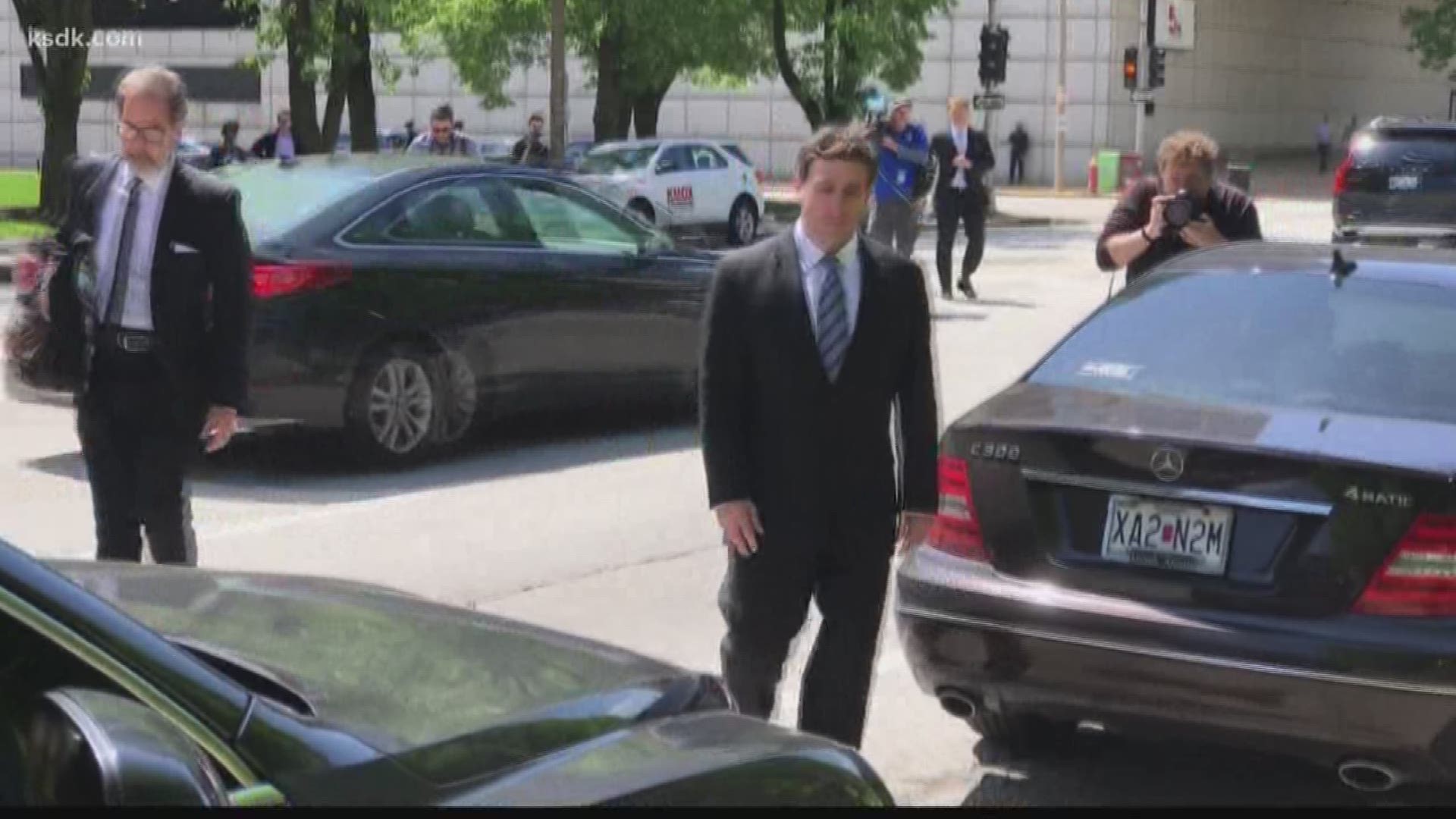 Stenger made his first court appearance Monday afternoon at the Thomas F. Eagleton Federal Courthouse in downtown St. Louis just hours after the grand jury indictment was unsealed and shortly after he resigned as St. Louis County executive.

Investigators reviewed thousands of emails and text messages and listened to recorded meetings and phone calls over their year of undercover work, which started in 2018.

Stenger secretly used his position as county executive to make money and, in turn, help companies enrich themselves "through corrupt means," according to the indictment.

Specifically, Stenger is accused of making sure John Rallo and his companies Cardinal Insurance and Cardinal Creative Consulting got contracts with St. Louis County in 2015 and 2016 in exchange for campaign donations and fundraising events.

Stenger also is accused of ensuring Rallo and his company Wellston Holdings, LLC, got the options to buy two properties in Wellston, Missouri, which were held by the Land Clearance for Redevelopment Authority of St. Louis County in 2016 and 2017.

The indictment accuses Stenger of taking steps to "hide, conceal and cover up his illegal conduct and actions, including making false public statements."

If convicted, each charge carries a maximum penalty of 20 years in prison and a $250,000 fine. Restitution also is mandatory.

Federal prosecutors said the investigation is still ongoing, so they couldn't release much more information, but they did say it is possible more people could be charged in the case.

The 44-page indictment details many of the secretly recorded phone calls and text message conversations. Some people are named in full, while others are only referred to with their initials. The U.S. Attorney's Office couldn't elaborate on why some people were named and others weren't.

While investigators were secretly looking into Stenger, he successfully ran for re-election as county executive. Goldsmith said they conducted their investigation in a way to not interfere with the 2018 primary and general elections—per Department of Justice policies.

"I have determined after much thought that it is in the best interest of our County and my family that I resign as St. Louis County Executive effective immediately."

In both of those transactions, the council raised questions about Stenger’s alleged involvement in offering high-dollar deals to the owners of both properties. Both of the property owners also contributed thousands to Stenger’s campaign.

According to Trakas, the subpoena ordered St. Louis County to hand over Stenger’s call history, texts and emails with current and former county employees about county contracts.

Stenger was on the rise in local politics before the federal investigation was launched.

He was set to become the de factor “metro mayor” if the city-county merger would get approved. The “Better Together” proposal called for Stenger to automatically become the metro mayor until an election could be held in 2024.

However, Unite STL—the group behind the Better Together plan—decided to change course and moved up the special election to November 2022 in their plan. They cited community conversation, rather than the investigation, as their reasoning.

“While the reunification effort is unaffected by today’s development, we do believe that it underscores the need for change and the potential benefit of reforming and streamlining St. Louis Government.”

"The serious allegations regarding Steve Stenger are deeply disturbing. In 2017, my office clearly outlined the process for the county council to initiate an audit to thoroughly investigate concerns with contracts. Stenger's actions made it clear then, as it is now, there was no real intention of ensuring a full accounting of taxpayers' dollars. I encourage the county council to act now so citizens can get the answers they deserve.

"Public corruption should never be tolerated. This is why I worked year after year to change state law so that my office has the authority to work with law enforcement to audit entities like St. Louis County. That solution was vetoed by ex-Governor Eric Greitens in 2017 and, the following year, it was killed on the final day of session by lobbyists working for government entities. In these final weeks of the session, I'm calling on the legislature to step up and provide law enforcement with the tools they need to expose public corruption. As long as there are public officials who put their own interests above those they are elected to serve, my office will remain committed to holding them accountable."

The Indictment alleges that beginning in October 2014 and continuing through December 31, 2018, Stenger and various individuals and companies schemed to defraud and deprive the citizens of St. Louis County of their right to his honest and faithful services, and the honest and faithful services of the St. Louis Economic Development Partnership’s Chief Executive Officer, through bribery and the concealment of material information. The purpose of the scheme was for Stenger to secretly use his official position to enrich himself through soliciting and accepting campaign contributions from individuals and their companies in exchange for favorable official action, and for individuals and their companies to enrich themselves and their companies by secretly obtaining favorable action for themselves and for their companies, through corrupt means.

If convicted, each charge carries a maximum penalty of 20 years in prison and a $250,000 fine. Restitution is also mandatory. In determining the actual sentences, a judge is required to consider the U.S. Sentencing Guidelines, which provide recommended sentencing ranges.

As is always the case, charges set forth in an indictment are merely accusations and do not constitute proof of guilt. Every defendant is presumed to be innocent unless and until proven guilty.

This case is being investigated by the Federal Bureau of Investigation and the Postal Inspection Service with the assistance of the Internal Revenue Service Criminal Investigations. Assistant U.S. Attorney Hal Goldsmith is handling the case for the U.S. Attorney’s Office.

PREVIOUS: County Executive Stenger responds to councilman: ‘I am not resigning’