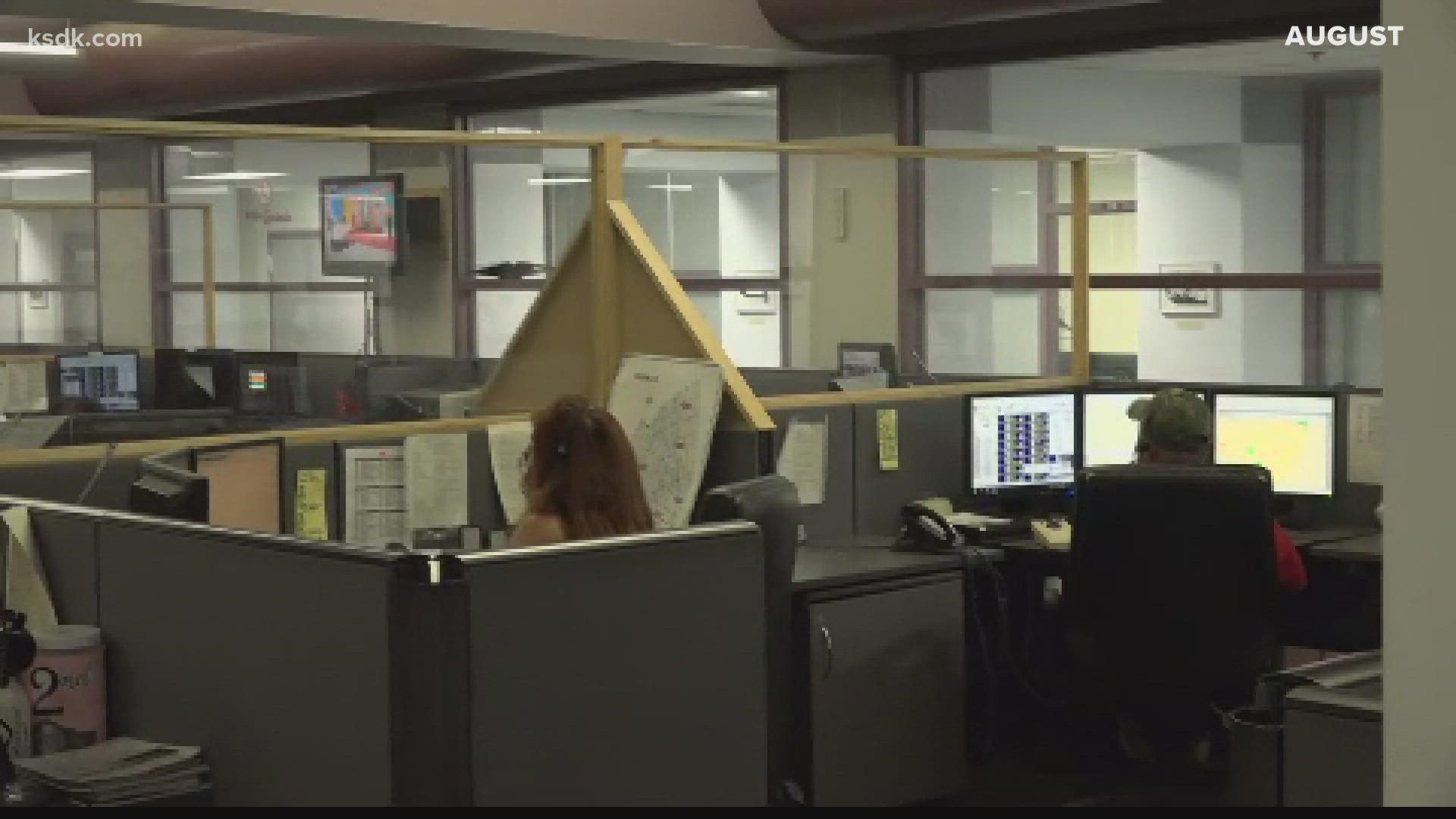 That’s what one woman robbed at knifepoint early Sunday said she remembers hearing a man tell her as he shoved her into her own car in a parking lot just south of Busch Stadium.

But she didn’t report the attack to police until the next day.

She said she and her friend were on hold with 911 for too long.

Stories like this one, about being put on hold when calling 911 in St. Louis, are continuing despite pledges by city officials including Mayor Tishaura Jones and her Public Safety Director Dan Isom to fix a large part of the problem by October.

“It is frustrating that it has taken so long to do what, seemingly to me, seems pretty simple,” Isom said.

At issue is a plan to consolidate the three types of dispatchers — police, fire and EMS — under one roof.

Fingers are pointing as to who is to blame for it not happening as promised.

Isom said the Personnel Division has had a plan to review since June.

Personnel Division leaders said that plan is not complete.

Right now, police dispatchers operate out of a dispatching center along Spruce Street while fire and EMS dispatchers work out of two separate rooms at the fire department’s headquarters along Jefferson Avenue.

Isom said one of the biggest problems is recruitment, and the city’s separate dispatching classifications may be contributing to the issue.

“We’re competing against ourselves,” Isom said.

That means 42% of the city’s dispatching positions are vacant.

And with salaries varying so widely, candidates who are already hard to come by are more likely to apply for the more lucrative positions even though the need is greater among the lower-paid positions, Isom said.

Isom said he sent a proposal to the city’s Personnel Department in June asking to do away with the titles and create levels of dispatchers. That way, he said, existing dispatchers can keep their pay, but be part of a classification of dispatcher.

“The idea is to get the pay equal for EMS to dispatchers and police dispatchers and then to have different levels where you can progress through your career,” Isom said. “You can come in as one, you could go to a two and then eventually, hopefully you could get up to three.”

Another reason to merge dispatchers is consistency, Isom said.

“When you put personnel into operation in the same building, you have the same leadership in the same management that provides consistency and direction. And it allows you the flexibility to move your personnel around where needed.”

Isom said the responsibility to merge the dispatchers into a new classification system falls to the Personnel Division.

“We have given, we believe, a complete proposal and draft plan to them,” Isom said.

The I-Team requested e-mails showing the progress that’s been made regarding the consolidation.

In a Nov. 9 email, Emergency Management Commissioner Sara Russell wrote that a list of duties for each new level of dispatcher would “make it easier to revise a classification for each role.”

“The Department of Personnel is still waiting to receive the list of duties from Ms. Russell,” Boeckelmann wrote. “Once this information is received, the department will review and continue assisting in this effort.

“The Department of Personnel is at a loss to understand why Dr. Isom would tell you that the proverbial ball is in our court on the updated dispatcher information when we are still waiting to receive it.”

Isom said progress is being made on other fronts.

An automated system now asks callers whether they need police, fire or EMS response instead of requiring police dispatchers to answer every call and transfer them accordingly.

That set up diverted about 700 calls away from police dispatchers in a week, Isom said.

He also said callers should not hang up when calling 911 no matter how long the wait. Hanging up and calling back puts callers at the end of the line.

“Please hold on and your call will be answered,” Isom said.

For the women who were robbed at knifepoint, they weren’t willing to take the chance.

They told police they had just left Paddy O's bar and walked to their car in a parking lot south of the bar. Once there, they started talking when a man approached one of them from behind, grabbed her by her hair, shoved her face-first into the driver’s seat of the car and held a sharp object to her back.

The man then stole the victim’s purse, got into a dark blue, four-door sedan and drove southbound along 7th Street.

The woman did not want to be identified, but told the I-Team: “The way he shoved me in my vehicle, it was so terrifying.”

The victims went to the police station along Jefferson the next afternoon to file a report.

She said her goal was to document what happened, “So other girls could be aware and be on the lookout for this man.”