One group is calling the posts hateful, anti-Muslim and anti-immigrant. 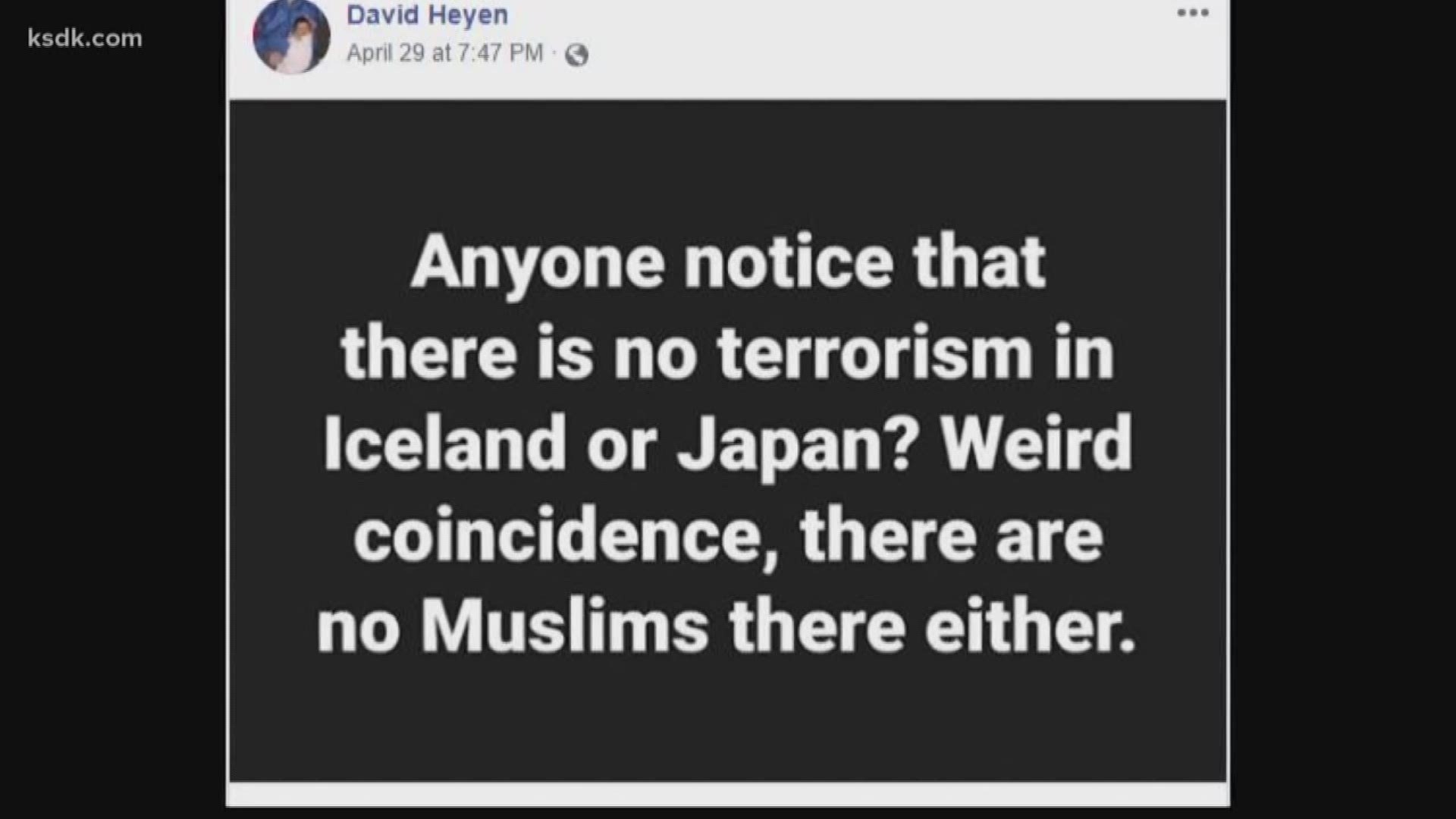 GODFREY, Ill. — The Chairman of the Board of Trustees at Lewis and Clark Community College is under investigation for posts he made on his personal Facebook page.

One of the posts David Heyen shared said, “Anyone notice that there is no terrorism in Iceland or Japan? Weird coincidence, there are no Muslims there, either.”

The President of Lewis & Clark Community College said they are doing some “fact-finding,” and that these types of posts do not reflect the values of the college.

“We spent 30-40 years creating a culture that would be a model of inclusiveness and the posts I've seen stand in contrast to everything we stand for as an institution. The college is an inclusive culture and we will remain that way,” said college president Dale Chapman.

Heyen sent 5 On Your Side a statement that said, in part:
"I am relatively new to the concept of social media. I did share some posts in order to generate conversation about various topics on my personal Facebook page. This wasn't done in my official capacity as an LCCC Trustee. This now being used as a distraction by a small faction of people who are not happy that I have asked tough questions as a Trustee."

The Missouri chapter of the Council on American-Islamic Relations is calling for Heyen to step down.

Heyen's full statement is as follows:

I am relatively new to the concept of social media. I did share some posts in order to generate conversation about various topics on my personal Facebook page.

This wasn't done in my official capacity as an LCCC Trustee. This now being used as a distraction by a small faction of people who are not happy that I have asked tough questions as a Trustee and sought to hold the administration accountable and provide more transparency in the spending of our tax dollars.

Despite these attempts by this small faction to distract the public, our board will continue on in our efforts to bring an unprecedented amount of fiscal transparency to LCCC, and support the efforts of the administration to make LCCC the best community college in the state, providing top notch education and job training to our students while being fiscally responsible to the taxpayers of the district.

Lewis and Clark faces some very real challenges. We have over $130 million in long term debt, enrollment is declining by an alarming rate, we pay salaries that are among the highest in the entire state of Illinois and have paid outside consultants millions of dollars in no bid contracts that have personal ties to our administration among many other things.

Some would seek to distract our board from asking tough questions and getting answers the taxpayers deserve. We refuse to be distracted.

The views expressed by Lewis and Clark Board Chair David Heyen are abhorrent to the Lewis and Clark Faculty Association. Ours is a culture of respect and inclusivity, and we reject completely and without reservation, any rhetoric which would make any of our students feel unwelcome. We serve a diverse community and population. We have a student body that is dynamic and insightful. We want all of them, as well as their families, to know, publicly, that we welcome each and every one of them.

As such, we believe Mr. Heyen is incapable of functioning as an effective leader of our college. While he has every right to his opinions, such views are in direct conflict with our values as faculty. We repudiate them entirely. Mr. Heyen made a statement to the media admitting that he shared these posts on his Facebook page “to generate conversation about important topics,” yet the comments were not only hateful, but patently false. This incident has been a distraction from our mission of educating students. We all want to put it behind us. Therefore, we urge Mr. Heyen to resign, not only as chairman, but also from the Board of Trustees itself.

RELATED: 'They told me they were going to kill me' | Woman assaulted while waiting for police to show up