Hong Kong’s protests have continued since they began in June over an extradition bill that would have allowed suspects to be sent to China to face trial. 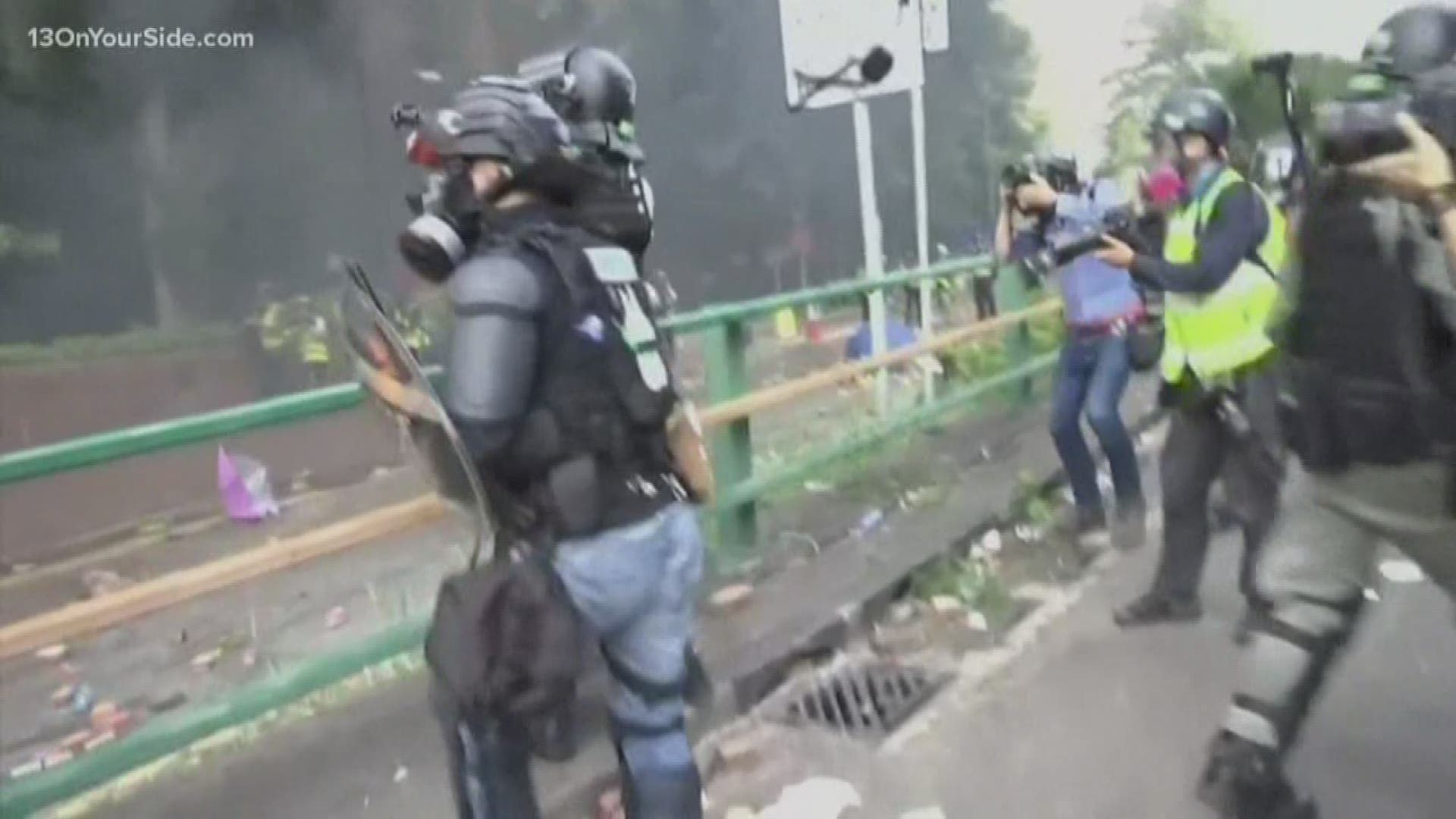 HONG KONG (AP) – Due to civil unrest in Hong Kong, the University of Texas has chosen to suspend its student programming there through the following spring semester.

"Due to the intensifying civil unrest in Hong Kong, all programming in Hong Kong for Spring 2020 has been suspended," the university said in a statement. "Texas Global will continue to monitor the situation and will review future programming to Hong Kong. We are hopeful that conditions will improve in the not-so-distant future so we can resume academic activities in Hong Kong with our partner institutions."

The Associated Press reported on Nov. 20 that Hong Kong schools reopened Wednesday after a six-day shutdown, but students and commuters faced transit disruptions as the last anti-government protesters remained holed up on a university campus, surrounded by police.

City officials tried to restore a sense of normalcy as primary and secondary classes resumed. Workers began cleaning up debris blocking a major road tunnel, but it was unclear when it would reopen. Officials warned protesters not to disrupt elections scheduled for the weekend.

A small group of protesters refused to leave Hong Kong Polytechnic University, the remnants of hundreds who took over the campus for several days. They won’t leave because they would face arrest, and police have set up a cordon around the area to prevent anyone from escaping.

The occupation of Polytechnic capped more than a week of intense protests, the latest flareup in the often-violent unrest that has gripped the semi-autonomous Chinese city for more than five months.

Also Wednesday, a former British Consulate employee said he was detained in mainland China and tortured by secret police trying to extract information about activists involved in the movement — revelations sure to add to protesters’ fears about Beijing’s tightening grip.

Since a police siege of the campus began Sunday, police have arrested 700 people who left campus to surrender, while another 300 minors were allowed to go home but may still face prosecution, Chief Superintendent Ricky Ho told reporters.

Among those arrested were people involved in an apparent escape attempt through a sewer. Ho said officers saw four people remove a manhole cover and lower a rope into the drain to help two others climb out. Ho said all were arrested but did not give further details.

It was unclear how many protesters remained on campus, but they appeared to number fewer than 100. About two dozen scrounged through supplies in the cafeteria looking for food in the morning. Trash littered public areas, and a stench permeated the campus.

One protester, who spoke on condition of anonymity because he fears arrest, remained adamant.

“I think if you go out and surrender, it just shows you agree with what the police and that government are doing or have given up the fight,” he said.

There were scattered incidents of protesters stopping trains by opening emergency doors and blocking traffic, but on a much smaller scale than last week.

Television footage showed long lines at some stations because of train delays. A few stations remained shut by damage from earlier protests.

A group of protesters, joined by students in uniform, blocked traffic at one intersection. Others in the area argued with them, removing some of the metal barriers that protesters carried into the street.

Even as the latest violence wound down, a fundamental divide suggested the protests in the former British colony are far from over.

Office workers joined protesters at lunch time in the central business district to show support for the movement, as they have every day since last week. Police kept the crowds on the sidewalks, so they wouldn’t block traffic.

Hong Kong’s protests began in June over an extradition bill that would have allowed suspects to be sent to China to face trial. Opponents saw it as a threat to the “one country, two systems” framework that gives Hong Kong its relative autonomy.

The bill has been withdrawn, but protesters now demand fully democratic elections and an independent investigation into police actions in suppressing the protests. City leaders have rejected these demands and said violence must stop before meaningful dialogue can begin.

“But much depends on the cooperation of violent protesters. It takes two to tango,” he said, adding that blocking roads and disrupting traffic will make it hard for people to vote and “then it will really ruin this election.”

The city sent inspectors to examine the damage to the city’s Cross-Harbour Tunnel, as workers used heavy equipment to remove the debris left on the approach road.

Protesters set fire to the toll booths during their occupation of Polytechnic University that overlooks the approach to the tunnel, one of three connecting Hong Kong Island with the rest of the city.

RELATED: University of Texas students ask for a list of professors guilty of sexual misconduct

The Hong Kong government joined China in condemning passage of legislation by the U.S. Senate that mandates sanctions on Chinese and Hong Kong officials who commit human rights abuses and requires an annual review of the favorable trade status that the U.S. grants Hong Kong.

“The passage of this bill is an important step in holding accountable those Chinese and Hong Kong government officials responsible for Hong Kong’s eroding autonomy and human rights violations,” said Sen. Marco Rubio.

Chinese Foreign Ministry spokesman Geng Shuang said in a statement that the aim of the bill was to “bolster anti-China, extremist and violent radicals who attempt to disrupt Hong Kong (and) damage Hong Kong’s prosperity and stability” as part of a plot to contain China’s development.

A Hong Kong government statement called the legislation “unnecessary and unwarranted” and said it would “harm the relations and common interests between Hong Kong and the U.S.”

Organizers said they’ve postponed the Hong Kong Open golf tournament because of the unrest, the latest in a string of disrupted public events. But in a rare boost for the economy, Chinese e-commerce giant Alibaba raised at least $11 billion in the city’s biggest share offering since 2010.

Navy veteran found in his Texas apartment had been dead for three years, medical examiner says