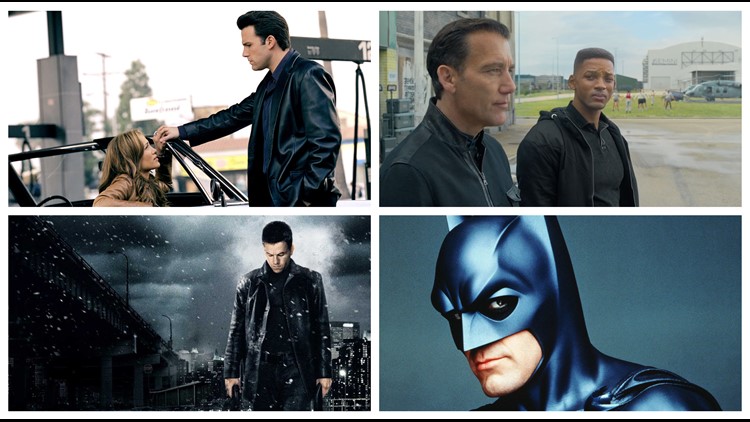 Opinion | The 10 worst "paycheck" performances at the movies

ST. LOUIS — It's hard to deny. You can't miss it. A good actor taking a paycheck and phoning in a performance. It's like ordering an egg over easy and getting it rock hard instead. You just bought a ticket because he or she was in it, and now you are left disappointed.

This happened recently with a well-regarded British actor in a recent release. I thought he could make a difference, and instead I just saw him pulling through the ATM drive-through.

So let's do a list, because that's the right and cool thing to do in discussions these days.

Who was that British actor in the recent movie? Owen, who almost played James Bond once upon a time. Facing off against not one but two Will Smiths in Ang Lee's science fiction action thriller, Owen could have chewed scenery as the bad boy maker. Instead, he stunk. You could literally see him cashing a paycheck at the ATM. I expected so much more from the guy who had a handful of lines in an underrated gem called "I'll Sleep When You're Dead" and gave an unbreakable performance.

The on-set drama was documented, but the performance just felt remote. Norton didn't even look like he was trying that hard to play a slimy villain to Mark Wahlberg and his gang of thieves. An actor of his caliber should always be good. This was during Norton's "I want to write, direct, produce EVERYTHING" phase. Snooze, dude.

If there was an award for moping and brooding endlessly, Wahlberg gets the cake for this performance, if you want to call it that. John Moore's film scored a 16% on Rotten Tomatoes, and it sank due to Wahlberg's wooden lead work. You could have propped up a gardening tool for better use.

*From my good friend and fellow film critic, Max Foizey

According to an interview with Caine that Max had heard about, Foizey recalls the esteemed British actor having this to say about the film. When asked if he had ever seen the film, Caine spoke bluntly: "No, but I've seen the house it bought and it's beautiful."

Young CGI version or old dude, this performance was so bad I bet Bridges took zero pictures on the set, something he is very popular for doing.

That is not how you follow up an Oscar win, Halle?

All of his direct to DVD roles are better than these trashy subverted performances. You can see him metaphorically checking his bank account during some of the film's serious scenes.

The film holds a Rotten Tomatoes rating of 6%. I rest my case.

There was a time a few years back when the Texas native could do no wrong at the movies. This film is not one of them. It features a deadpan McConaughey either not taking the Stephen King material seriously or overacting to a literal breaking point. It stunk.

There's more bad ones that stink of robotic intent, but I'll leave it at ten. Thanks for reading.

RELATED: Review | Why 'Pain and Glory' is Pedro Almodovar's loving tribute to the power of filmmaking

RELATED: Review | Poised to be something different, 'Black and Blue' is sadly a misfire