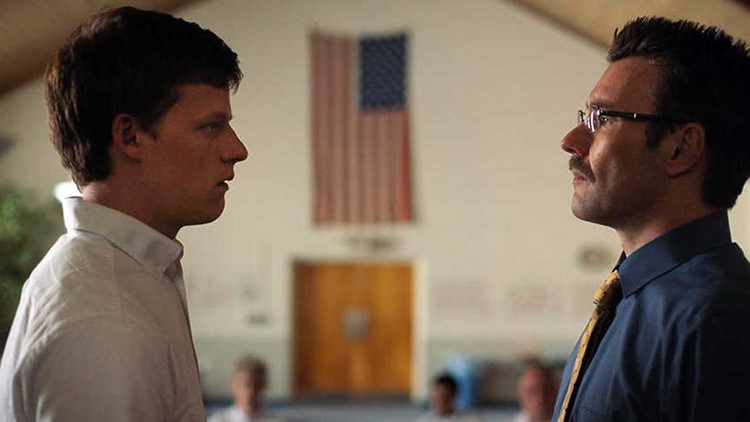 Jared Eamons (Lucas Hedges) has a problem. A good student, athlete, and popular kid at his high school, Jared is quietly harboring a secret: he's gay, and his parents, Nancy and Marshall (Nicole Kidman and Russell Crowe) are devout Christians. When the divide between family and son grows too large to overcome, Jared is shipped off to a conversion therapy program, hosted by Victor Sykes (Joel Edgerton), a leader with unclear credentials.

Boy Erased makes one thing painfully clear: many families around the country will hurt their children in order to protect their religious beliefs. Conversion therapy programs are littered around the country, affecting close to 57,000 LGBT teenagers. What you are seeing in this film, written and directed by Edgerton, is a battle between religion and love-and how a family defines those things in their lives.

Like Beautiful Boy, Boy Erased isn't an easy film to watch at times, but it is an important film that will open up vital conversations. A film that will be uncomfortable for some, make others angry, and create friction among moviegoers. Jared is going through the motions as he transitions to college, with a girlfriend that is mostly for hanging out and someone to blind others from his true desires. When she wants to get close to him sexually, he pushes her away, and they break up. As soon as he gets to college, an incident with a running friend opens up the problems for the Eamons family.

I would be lying if I tried to tell you this film didn't do a number on my soul. It had to sitting in my seat after the credits rolled, wondering why these conversations are still happening in 2018. If racism is one huge problem in our society, sending your kid off to same-sex boot camp is another.

Edgerton wisely wastes little time in getting Jared to the conversation program, choosing a non-linear plot device to show us the events that led up to this decision that broke the Eamons family. By doing this, our cages are immediately rattled with those uncomfortable vibes about the program's intentions. The film picks up with Jared being dropped off for the first of twelve days, spending eight hours listening to a group of men tell him that he is organically mixed up about his feelings and, according to Sykes, is simply experiencing "a moment".

I'm talking about breaking down a sexually troubled football player by beating him with bibles, teaching young boys masculinity by taking them to the batting cages, and screaming at them that they hate their fathers in visceral testimonies. Religious martyrs with a daily ritual of humiliation that will no doubt rile up the viewer, and for good reason.

Edgerton's screenplay was inspired by Garrard Conley's coming of age and coming out memoir, Boy Erased: A Memoir of Identity, Faith, and Family. While creative liberties were taken with some of the events depicted in the film, one can be certain plenty of this takes place in these programs. This movie doesn't hold back one bit in showing you what really goes down in a place where people try to call themselves doctors and people of religion, using their power over unsure families to hold power over young men and women.

Here's the thing. Important films usually have an agenda, and Boy Erased is no different. The main idea here is showing the true colors of these conversion programs, and how certain people twist others around by trying to fool around with DNA inside a building with no real method of madness. Imagine being taken back to kindergarten and told you aren't the person you think you are, yet more like a person the world isn't ready for.

Inspired by Conley's experiences, we get to see the ugliness behind the curtain. While the imagery of Grammy award winner Michael "Flea" Balzary verbally eviscerating a young man about his beliefs is blunt and relentless, the scenes between Jared and his parents hit the hardest.

While the conversion therapy is one big laughing stock hoax put on to make money and sway minds, a boy searching for a full amount of love from the people who brought him in this world carries far more power. This is where the actors really shine.

Edgerton, a Golden Globe winner himself, didn't mess around in casting the main three roles that push the film home. Crowe hasn't leaned into a role like this in years, and it's a welcome return to the heavyweight dinner table for the Oscar winner. Marshall, a priest and firm believer in God, just can't separate the love for his religion and his son. Kidman's Nancy finds it easier, telling Jared how it's important to identify when it's time to hurt your child emotionally to teach a lesson and when it's truly a damaging sequence of events. Kidman packs a punch in a couple scenes near the climax that may get you of your seat and induce clapping. I'm talking about a Charles Dutton RUDY clap!

The real talent here is Hedges. The soon-to-be 22-year-old actor, along with Beautiful Boy's Timothee Chalamet, is taking over Hollywood. Nominated for 2016's Manchester By The Sea, yet also potent in Three Billboards Outside Ebbing, Missouri and Lady Bird, Don't sleep on his work as Jeremy Renner's son in Kill The Messenger. A master of restraint, Hedges is a slow boiling pot of water in this film. He takes an understated route to his rage as Jared, a young man who knows what he wants and sees the border that needs to be crossed, yet can't get there due to betrayal and indifference. It takes a fine caliber of talent to resist manipulation in the third act's scenes, and Hedges get there.

He stars in his father's film, Peter Hedges' Ben Is Back this December, as well as Jonah Hill's Mid90's. I'm telling you right now. Hedges will find his way back to the Oscars. Boy Erased confirms that there's no stopping this kid. I can't believe he is only 21 years old.

There are films you enjoy immensely and films that you admire a great deal, even if they make you angry. Boy Erased is the latter. A movie that challenges you step into the box of one of the world's most unfortunate stigmas; a problem centering around an entrapment of beliefs. Edgerton's film is bold, straight-forward, and will bite you in the end.

I liked it, downloaded its message, nodded my head in wise admiration of Edgerton. I found a way to be warmed up a bit by its hopeful yet rightfully open-ended conclusion.

If you don't leave this film talking endlessly about its effect and intentions, turn around and go back into the theater. Turn your head to the projectionist and ask him or her to play it again.

You need to talk about Boy Erased. No matter what side you fall on, it's that kind of movie.