Back in 2014, Balasco's drama series debuted to rave reviews- but most people didn't see it. They couldn't find it. That all changes on Wednesday.

ST. LOUIS — Back in the latter stages of 2014, a television show debuted on DirecTV's streaming device (which is now AT&T Now) to critical acclaim. A small cult following developed shortly after its debut, bringing fight fans and casual TV show observers to the table of Byron Balasco's "Kingdom."

A California-based series about a retired MMA champion (Frank Grillo) hanging on by a thread both financially and morally who trains his sons (Jonathan Tucker, Nick Jonas) out of a gym called Navy Street. When an old friend and still young former champion in Ryan Wheeler (Matt Lauria) comes to the gym after getting out of prison, everything in Alvey's world is thrown upside down.

There's more. Tucker's Jay is a bundle of talent, nervy emotion, and bad decisions. Jonas' younger brother is a closeted homosexual who wants to be the fighter his dad dreams of, but also be able to come out in a sport not known for being nice to gay fighters. Their mom, Christina (Joanna Going), is a drug addict-prostitute who comes back into their lives. There's an ex-con named Keith (Paul Walter Hauser from "Richard Jewell") who befriends Ryan but brings in more madness to Lauria's tough yet fragile fighter's world. Oh, and Ryan also used to date Alvey's girlfriend, Lisa (Kiele Sanchez) who co-owns the gym that will be sponsoring Wheeler's comeback.

Balasco didn't just give the world another fighting show. He gave us an authentic slice (Dana White and other fighters adore and respect the production) of a fighter's life away from the octagon. Stripped of his gloves and ability to inflict pain on another human, we get to see how fighting can shape, mold, and also induce self-destruction in a human being. But he didn't shy away from the glory and over-saturated glow of happiness that abounds from a victory.

As Grillo's weary patriarch ruminates on at the end of the first season, "every man has to face the inevitable question: Am I one of the weak or one of the strong? Where do I line up in the pecking order of it all?"

The series had a lot of gas left in the tank when it concluded after three seasons and 40 episodes three years ago, but it left a dent with those who watched it. It is my prediction that the dent will include several others, hopefully in the millions, people when it arrives on Netflix this week. 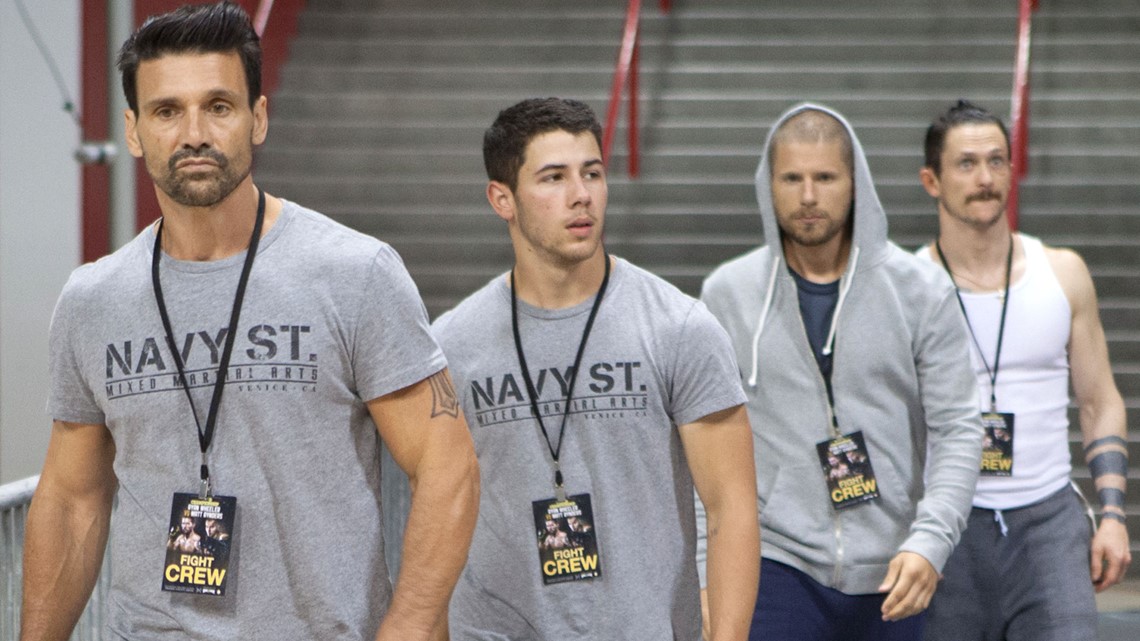 Opinion | Why Byron Balasco's 'Kingdom' will be the next 'Waco' for Netflix
Byron Balasco's show about an MMA family is on my Mount Rushmore of TV shows, but it never got the proper attention with DirecTV. ST. LOUIS - It's always a nice thing when great television finds the proper home.

I reached out to speak with Balasco, who resides in Los Angeles, about "Kingdom's" purpose, effect, and future. Are more episodes on the way? Scroll and find out in the teleplay from our conversation last week.

KSDK: It was some of the best news of the year when "Kingdom" was bound for Netflix. I almost couldn't believe it.

Byron Balasco: I couldn't believe it either. I didn't even know it was happening until someone uninvolved told me about it before it was official. Normally, I would know it was happening, but due to the way things are right now and the quarantine, all the rights for the show became available. They (DirecTV) made a deal with Netflix very quickly. That was the biggest hangup in the past: untangling the rights from DirecTV and various mergers. Here we are.

KSDK: Let's be honest. This is one of those shows where not enough people know about it. In my opinion, this show never got the proper push in marketing.

Balasco: It never did. This was a do-it-yourself show. It was on a platform that many people didn't know about or have, one that doesn't even exist anymore. So, it was always hard to find. After we stopped making it, it was still hard to find due to the rights issues. It was the only media piece in the world that included a x-y-z type plan to access it.

KSDK: It was like being invited to an exotic island, and later finding out the majority of the population didn't even know it existed. It's going to be relevant for the fighting subplot for quite some time, but a lot of real people battle the same things these fighters deal with in this series.

Balasco: That definitely resonates now more and more, as the country is in the shape it's in. I'm curious about the response we get on a large platform like Netflix.

KSDK: Looking back at the show, what was the original reason you had to make this show?

Balasco: I just felt it was such a visceral metaphor for what we all deal with, such as finding your place in the world. Where you do stack up and fit in, and who do you belong to and where do you belong? A certain simplicity that you can get from a fight, you can make sense of that. It's always the stuff outside the cage that torments you. It was my way of trying to make sense of life.

KSDK: The characters on this show have several layers that the viewer gets to see unveiled over the course of the entire series. How do you go about creating and writing those characters? I immediately think to myself those types of realistic people should be easy to write but then again, maybe not so much.

KSDK: That's one of the show's strongest points. While the characters evolve in a certain way, they never acted completely out of character either. You were never surprised by a decision, such as some of the tougher ones Frank Grillo's Alvey Kulina made in the final season.

Balasco: I think everybody reverts to the mean eventually. They are who they are and they can get better, try harder, and do better-but their core is still in them.

KSDK: The show hit a high level for me in the quieter more dialogue-driven moments in the film, such as Jonathan Tucker's monologue in the series finale. He addresses the audience in a way many people would want to address the audience. You were moved to tears. That's the sweet spot of television writing.

Balasco: I think if you stay true to the characters, for better or worse, you're going to land in the right spot. If the writing is laced with love and empathy, complications of a character or flawed individual, you'll get to the right spot. It may not be what everybody wants to hear, but it's the way.

KSDK: A lot of the actors on this show are people that most of the entertainment audience wasn't quite associated with. Faces you knew but didn't have a name for. Grillo was getting there with "The Purge: Anarchy" but not quite. I think it helped the characters make a true impact.

Balasco: That's one of the things we got really lucky with casting the show. Many of the men and women on our show were known, but I don't think anybody was so well-known that you could come into the show and the celebrity would overpower the character. Even Nick managed to sink into his character in a way that I think erased whatever notion of him as an artist.

KSDK: It must have been gratifying in a way to see how the critics did get the show and adore it. Did that appease some of the anger from the show not being marketed well? Knowing people got what you were sending? People like Dana White.

Balasco: I always took a lot of gratification from that, because we got to make the show we wanted to make, and the people responded and felt that we had done right by them. That was really important. It helped get me through the frustration of not being on a bigger or different network.

KSDK: Now for the million dollar question. Now that Netflix does have control, is there a chance for more "Kingdom?" Or is this just a series of "we're just happy to be on this platform?"

Balasco: Right now, it's here it is and here are all the seasons. We have this platform. There's no conversations or anything about doing more seasons at the moment, but you never know. If enough people saw it and liked it, they might ask us. And I know we'd all be done to do it. It depends on what kind of numbers it does. I have no idea because I haven't talked to Netflix about any of that.

KSDK: I always thought that a movie could really work. A "here's where they are now" type of thing.

Balasco: We all loved making the show and miss working together. It was always an intriguing prospect to do more. But like I said, no conversations or anything like that now. I never thought I'd be on Netflix.

KSDK: Do you have anything in the pipeline?

Balasco: I have a few projects that are various stages of development that I can't really get into right now. The brakes have been put on Hollywood. I have a couple of scripts ready to and a couple other ideas. We're frozen right now, waiting to see when we can make something again.

KSDK: In the meantime, people have a great reason to not get sweaty and stay inside during the heat.

Balasco: Stay in and watch 40 hours of "Kingdom."

Part of the appeal of being a devoted fan of the show is knowing you were there at the ground floor. But the truth is, I wasn't. I didn't watch the pilot until at least eight months after it debuted on DirecTV-mainly due to the fact that unless you had DirecTV as a provider, you couldn't get access to their original programming. This is before every other network had a streaming service. DirecTV did but fumbled its usage of their content's value. If you weren't a television critic, this show was hard to find. A hidden gem of the most bittersweet variety.

All of that changes on Wednesday, July 1. Netflix will be "Kingdom's" primary location, a source of rigorous self-torture, a symbol of being a fighter. When I first wrote about this show years ago, my headline read like this: "'Kingdom' is fists, heart, and blood rolled into greatness."

Once Season 2 concluded with its double-edged sword of doubt, Season 3 was always going to pack a punch. And it did. The final hour and image will break you in all the right ways, the kind of scars that a great television show leaves with you. "Kingdom" was unique and visceral, a thrill unlike most others.

Here's the thing. Whatever Balasco has going next, I'm already in. You should be too.

For the time being, take a tour of Navy Street this week. Click on "Kingdom" Wednesday at 2 a.m. and see what your next three days will look like. I'll warn you now. It's addictive. Have a boxing bag to hit and a bottle of bourbon to chug, because Balasco's show has a full-bodied effect on you.