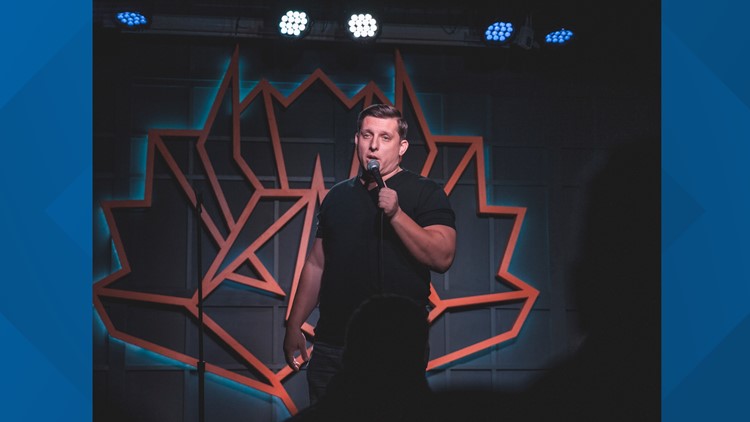 For Rafe Williams, 'Young Grandpa' is a love letter to the St. Louis comedy scene

ST. LOUIS — "The journey isn't about you; it's about everyone around you. What good is success if you can't share it with other people. Be the guy who sends the elevator back down."

When Rafe Williams took the stage last summer to record his first live album at the esteemed Improv Shop in the heart of St. Louis, the crowd showered the respected comedian with praise before he could even tell a single joke or story. Cautioning the crowd, Rafe advised the audience to "save a little bit."

Now, some would say that's inexperience or nerves talking, but I can assure you it's just an effortless ability to be humble. It's a tireless trait that has helped Williams go from a rookie climbing on a stage in 2013 to being someone being summoned for a live album by the renegade entertainment company, 800 Pound Gorilla Records.

"Young Grandpa," which is currently streaming on Pandora for a free spin and available for purchase everywhere on Jan. 24, could very well be the start of something big for Williams, a seasoned pro who has served as a jack of all trades at Kevin McKernan's Improv Shop as well performing all over the city and country, hosting several gigs and headlining numerous shows. Or it could simply be a great night doing what he loves at a place he truly adores, going so far to call the popular performer establishment "a great incubator for comedic talent."

How did it come together? A little ingenuity and shoutout from a couple of his fellow comedians, which is how 800 Pound Gorilla got involved. "The company itself, 800 Pound Gorilla, has carved out a niche for audio albums. It's making a comeback. Everything is so mobile now, people listening on their phone," Williams said. "When I'm driving to Tulsa, I can only listen to The Avett Brothers and Rolling Stones for so long before I need to get something else in my brain. They (800 Pound Gorilla) were savvy about comedy albums and Sirius XM stations being a good way to get up and coming comedians out there."

According to Williams, the label also has an exclusive deal with Netflix where they release the audio version of every stand-up comedy special released on the streaming platform. You can find everything from George Lopez and Michelle Wolf to Chad Daniels and Marc Maron on the website. For Rafe, it was an outlet to another land of opportunity.

"As an artist, it's cool to self-produce an album, but where do you go from there? So having 800 Pound Gorilla really helped. A couple comedians on their label reached out, told them I am pretty funny and that they should get in at the ground floor so to speak. They reached out, I sent them some tapes, and they loved it and wanted to record an album," Williams said.

A moment of validation nearly five years after first climbing on a stage. "Every comedian knows the date and I don't. I did some open mics way back in the day when I went to school in Carbondale ... when I was super drunk," Williams said. "I quit drinking in 2011, and I wasn't sure I'd be able to summon the courage to get on stage, because I had crippling stage fright. To get over being afraid of being on stage, I just did immersion therapy. I joined a toastmaster's class at Anheuser Busch. I started taking improv classes and did open mics. I got on stage in front of people as much as I could. It's like swimming with sharks if you're afraid of sharks. I attacked it head on and it clicked."

Williams knew he could be funny, but he wasn't sure if he could do it in front of a bunch of people. That's where The Improv Shop came in. "They helped out a lot with that, because in improv you share that responsibility with a bunch of people. You succeed and fail together while stand-up is much more of an island, like Tom Hanks in 'Castaway' and the microphone is Wilson," Williams said.

Since it's where Williams cut his teeth as a comedian, The Improv Shop was the only place that his first live comedy show would be recorded, even if it was against the label's initial wishes. "It was really important for me to do it there. The record company threw out a couple other cities, like a place in Nashville or Portland. I wasn't a draw in those cities, so I'd be at the mercy of whoever showed up that night. And up until this point, New York didn't make me. Los Angeles didn't make me. St. Louis made me," Williams said.

When Williams went to McKernan and the general manager, Andy Sloey, about doing the show, the two men were instantly in for the guy who had gotten his start there. "They wanted to help in any way they could. There were no issues and they were super-accommodating."

But it was more than just one location that laid at the heart of the reason Williams only had one choice for where to do the show. "I wanted my first album to be here and be a love letter to the city that made me," he said. "You don't know how this is going to go. This might be the pinnacle or there could be other things in store, but it was important for me to do it there. It's such a good place for up and coming cities. I don't think it gets enough credit. In terms of pure incubation and helping the next comics develop, it's Improv Shop hands down."

One of the things that makes Williams so special is how he helps other comedians out. He runs classes at the Tower Grove location, spreading his knowledge and experience as far as he can to give another soul with stage fright a chance. "I try to be what I wish I would have had when I was starting out. Someone who provides stage time and mentorship, along with some positive feedback in a business where you don't get a lot of it," Williams said.

As he puts it, being a stand-up comedian is the only artform where the public is your editor and you get feedback in real time. But there's something more for Williams in his passion to help others, a way of making amends for his past indiscretions. "There were times when I was drinking that I was a very selfish person. I try to be mindful of that. I have a saying that I picked up from Les Brown. He said, 'the service you provide is the rent you pay for the space you take up on Earth,'" Williams said.

He tries to retain that perspective at all times. "The journey isn't about you; it's about everyone around you. What good is success if you can't share it with other people. Be the guy who sends the elevator back down. That's an important part of my overall personality, not just my comedy," Williams said.

It's that personality that led me to ask Williams about the relationship he shares with his partner and fellow comic, Tina Dybal. Each have been crowned the Funniest Comic in St. Louis at Helium, but does that lead to comedy competitions or inner battles on the homefront? Williams says it's quite the opposite for his, as Dybal commonly puts it, "ride or die."

"It's pretty fun at our place, I'm not going to lie. It's exactly how you'd think it would be, there's a lot of hot bits floating around the house. She's super funny and very supporting. Some people say you shouldn't date other comics, but I find that to be untrue. She's wonderful, caring, and we never get jealous of one another," Williams said.

Dybal keeps Williams grounded and also pushes him to be better. "She understands the business and knows what I am going through. She understands all the trappings of the career, which for me, is super valuable."

With "Young Grandpa" arriving worldwide in a week, Williams is already looking ahead at other opportunities. He has a recorded television set at coming in March, which represents another breakthrough in his profession. "It's a new show called Live From Zanies in Nashville. They created a new station called Circle TV, which is a cable channel that starting in May will be available digitally," Williams said. "It's an all things country lifestyle channel. They have a lot of original programming coming out, and one of the shows is a one-hour comedy show. They asked me to come down and record my first television set, which is huge."

Williams has a couple other BIG things in the works that were safe for our ears but not ready to be launched onto the internet just yet. The developmental stage if you will, marinating elsewhere for the time being. Let's just say they will click with you instantly when he does share them down the line. The goal in 2020 is doing more shows, booking more gigs, and building up his resume. As they say, get your face out there and soon enough, everywhere. As Williams constantly said throughout the interview, all you have to do is sell tickets. That's the beginning and end game for any kind of entertainer, especially a comedian.

"I know I have enough material to do all of it, but people need to know who you are in order to sell tickets. I've learned along the way that everything won't pan out-but being nice to people, putting your best effort forward, and putting a lot of lines in the water is the key," Williams said. "You just need to keep going out until something pops. You won't get everything, but you might get that one thing that takes you to the next level and over the top."

Williams' hope is that the magical combination of 800 Pound Gorilla Records, The Improv Shop, and the live recording leads to something bigger. The passion-fueled result of many hours of care and love put into a craft that isn't just career-enlivening, but for guys like Rafe, life-saving.

My advice would be simple: do what the record company did and get in at the ground floor. Witness the love letter to the Lou and then ride it out until we see Williams on the big stage. He's got the talent and the gratitude to make it past the next level.

"Young Grandpa" is just the beginning. If you have Pandora, do it now, as Arnold would say. Here's how you get it next Friday.

As Williams said early on in the live show, he's "a 36-year-old P-pa trying to make it in comedy." Support this man!