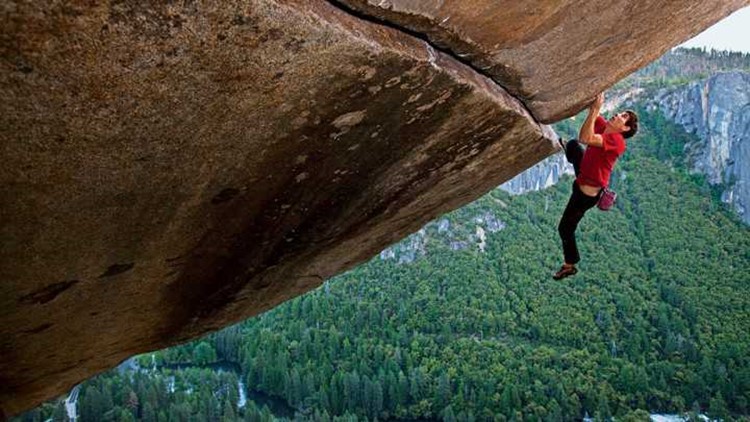 'Free Solo' is a captivating and honest portrayal of fearless climbers

When I was a kid, there was a tree in our neighborhood that I desperately wanted to climb. It was tall, intimidating, and had large branches that looked like ugly hands on a monster. It stared down at me like I was David to its Goliath, and I tried several times to climb it, thinking anyone could do it. In the end, I never reached the top, and I grew a new appreciation for professional climbers.

Free Solo, Alex Honnold's story of climbing Yosemite's El Capitan last year, brought those exciting fears from my childhood back to the forefront of my stomach and throat. To say this documentary inspires and enlightens is an understatement; the job done here is tremendous and should cast a spell on you, rather or not you are afraid of heights.

In case you don't know, this isn't standard rock climbing, where the individual is supported by high-tech equipment, cables, and massive ropes that protect him against a deadly fall. As Honnold's friend and climbing buddy, Tommy Caldwell, deftly puts it, "Imagine going for the Olympic Gold Medal, and if you don't get it, you could die."

Free Solo climbers go up the tallest rock, cliffs, and mountains in the world with no extra equipment. Cables, ropes, and safety harnesses are left at the ground as the solo soul ascends. All Honnold takes with him up El Capitan is a pouch of chalk, a workout outfit, and brass balls as large as Texas. Watching him dig his hand in-between a crevice or latching onto a giant boulder with no handles isn't always the easiest task for the viewer, but go ahead and try to look away. I dare you! That is nearly impossible, because we know the stakes coming in.

Climbers and thrill-seekers like Dean Potter and John Bechar have died in recent years going for giant feats of mankind. I am talking about expert climbers biting the dust in furious pursuit of something incredible. According to the San Francisco Chronicle, 31 of 120 climbers who have attempted El Capitan Wall since 1905 have died. Five people have died since 2013. Those aren't terrible odds, but they get dicey when you factor in Honnold went up there without any equipment or help.

The film follows Honnold's journey from ground to the eventual climb on June 3, 2017. The preparation, training, and cost of his endeavor is felt on many, including his girlfriend, Sanni McCandless, and the crew that films his ascent. The film thrives during the climbing sequences due to the foundation built on the ground by directors Jimmy Chin and Elizabeth Chai Vasarhelyi. You see Honnold's hesitation and insecurities as well as from his family and supporters.

The filmmakers take the action to another level, and the technical achievements are first rate. The cinematography is electric, with shots closing in tight on Honnold during his climb, but never failing to branch out and show us the entire ring that enclose his stakes and livelihood. Cinematic composer Marco Beltrami builds a score that ratchets up the suspense just enough to push you towards the edge of your seat. Throughout the film, Honnold takes you inside his life as well as up the cliffs and rocks. It's an all-encompassing tale that will captivate you. It takes a village to get this story done right.

When Honnold did this, the feeling was akin to Neill Armstrong walking on the moon over 50 years ago. Many climbers have reached the top of El Capitan, but none did it free solo climbing. When you are watching the documentary, you are witnessing history in intimate fashion.

Every year, documentaries come out and properly blow us away. 2018 has been a great year for this genre, but I knew a lot about Fred Rodgers and Whitney Houston going into those films. Here, I knew next to nothing about Honnold and his accomplishments and left wanting more.

At their best, documentaries inform, enlighten, and turn our head. Free Solo does just that.